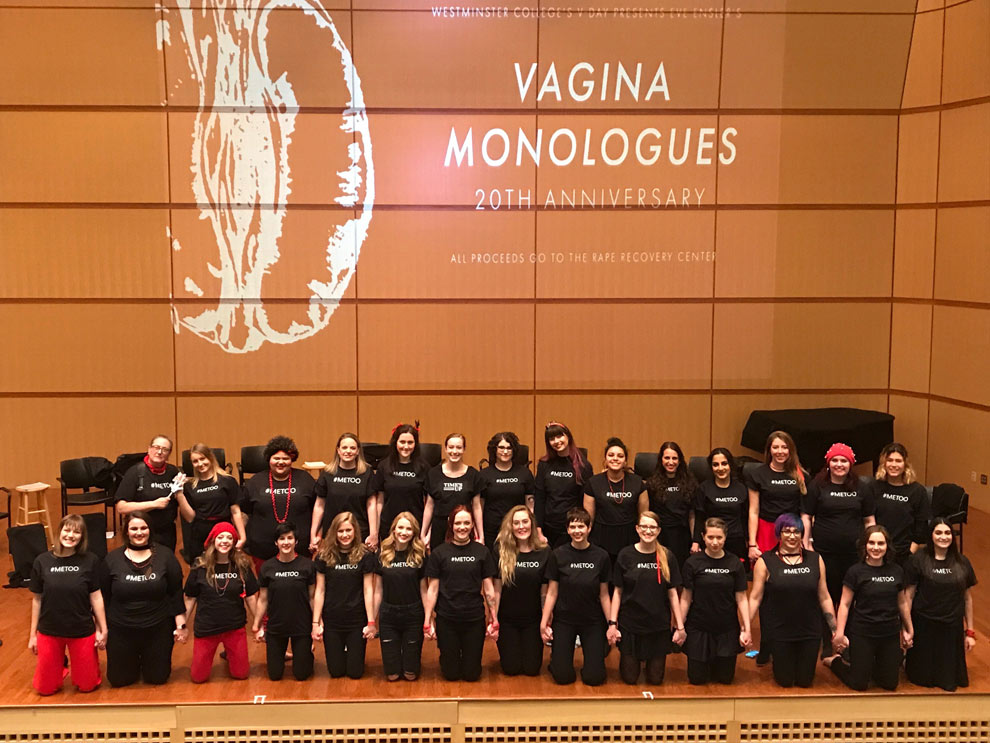 The cast of the 2018 Vagina Monologues production gathers in the Vieve Gore Concert Hall for a group photo. Carissa Christensen, a senior and the president of the organization that produces the show, said her goal for the Vagina Monologues was to create a space for “all women and survivors [to] feel empowered.” (Photo courtesy Carissa Christensen)

That’s what Daisy Sherman, a student at Westminster College, belted onstage through the Vieve Gore Concert Hall on Feb. 10 as a part of the V-Day club’s 20th annual production of Eve Ensler’s Vagina Monologues.

The show aims to spread awareness about issues facing women and their bodies, and all proceeds from the event go to the Rape Recovery Center. V-Day has donated over $100,000 to the organization since the first production, according to club president Carissa Christensen.

Christensen, a senior, said her goal for the Vagina Monologues was to create a space for “all women and survivors [to] feel empowered” and to help “people feel driven to make a difference in any way that they can with this cause.” 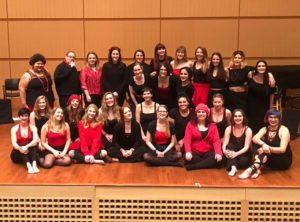 The cast of the 2018 Vagina Monologues production gathers in the Vieve Gore Concert Hall for a group photo. Rikki Holman, a senior and co-director of the Vagina Monologues, said the show is as applicable to audience members and performers within the current political climate as it was 20 years ago. (Photo courtesy Carissa Christensen)

Audience members had their share of laughter and silence, as they were encouraged to break past barriers and engage in conversations typically discouraged from the public sphere.

Some first-year students said the Vagina Monologues wasn’t what they were expecting and felt uncomfortable at first. However, they said it provided an important opportunity for them to engage in conversations about sexual assault and abuse.

“We should be talking about these things,” said Blaine Whitford, a first-year student who attended the production. “It’s only an issue if we don’t talk about it.”

The event provided an opportunity for its actresses to speak out about their own experiences with sexual assault and abuse and a platform to let other women know they aren’t alone, as well.

“Growing up in Utah, you don’t see people engaging in talks like that,” said Whitford, an undeclared major. “It’s refreshing to see it become a public event, and I agree with the message they were trying to get across.”

“These issues won’t go away unless we talk about them,” Christensen said. “And the more we talk, the less uncomfortable things will get. That’s why we say the word ‘vagina’ hundreds of times throughout the show. A part of my body has been pegged as taboo by society… that’s wrong.”

Rikki Holman, a senior and co-director of the Vagina Monologues, said the show is as applicable to audience members and performers within the current political climate as it was 20 years ago. 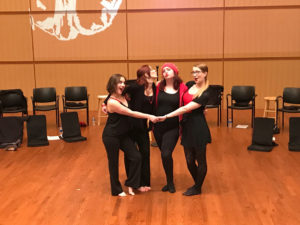 “The significance is to get this message across that vaginas are amazing and they have been through so much, good and bad,” Holman said. “With the #MeToo movement being so prevalent, the conversation is popular now and allows an impact.”

The #MeToo hashtag serves to demonstrate the magnitude and prevalence of sexual harassment and sexual assault in the workplace and in society, while also showing survivors they aren’t alone. It gained significant traction after news organizations surfaced several sexual misconduct allegations against producer Harvey Weinstein and eventually against over 51 other men in positions of power.

“This show tends to draw more of an audience in a tense political atmosphere because the material is more relevant to them,” Christensen said. “When [Donald Trump], a man who has more than 15 charges of assault against him becomes president, people tend to feel driven to be more active politically.”