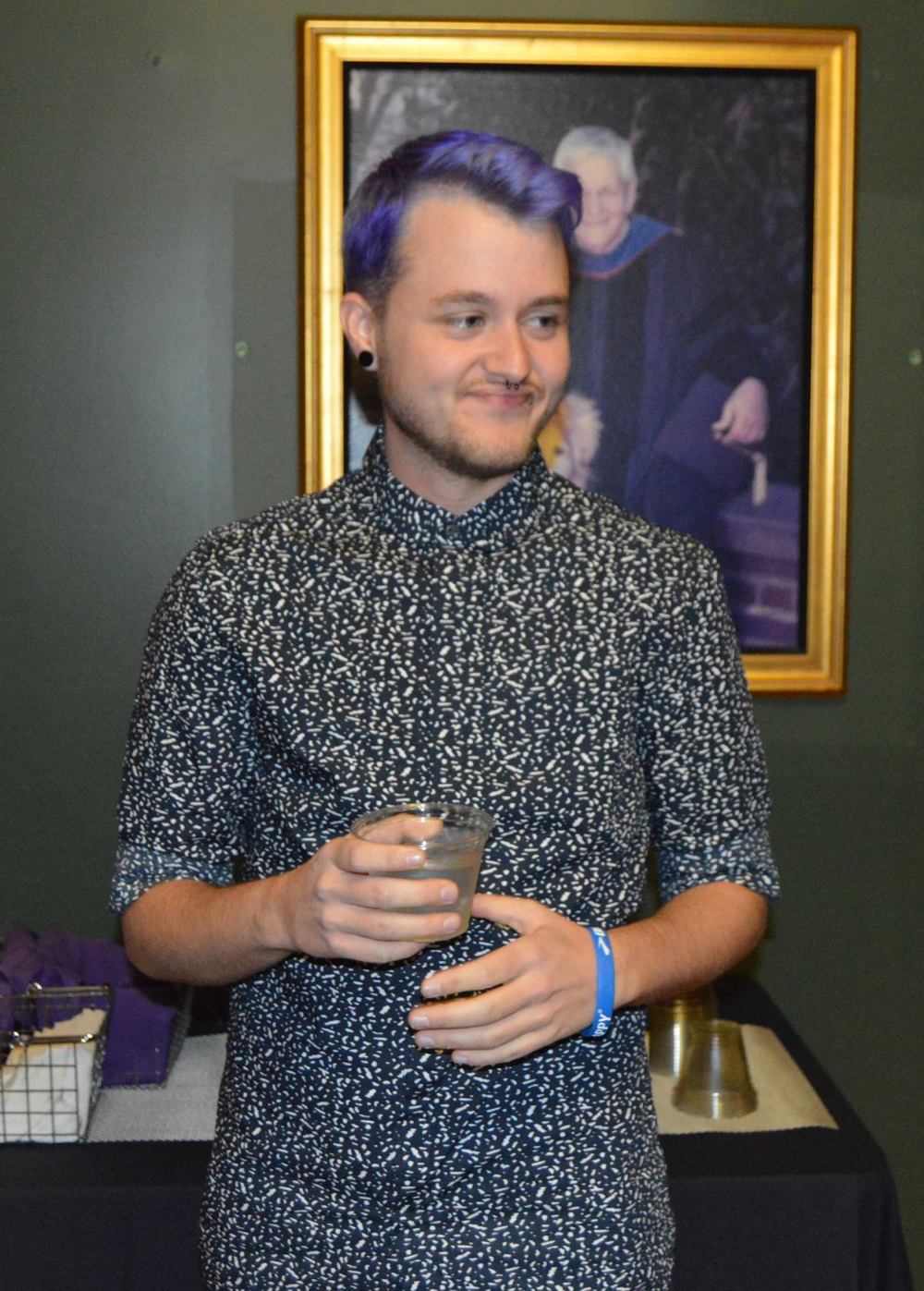 Chase Ross, a graduate student at Concordia University in Montreal, spoke at Westminster’s Bastian Foundation Lecture Series on Oct. 22. He spoke about the importance of passing and other issues pertaining to the transgender community.  Photos by Rachel Robertson

Gore Auditorium was filled on the night of Thursday, Oct. 22, as students, faculty, local high school students and other members of the Westminster community flocked to the auditorium to hear Chase Ross, a transgender rights activist, speak.

Ross was the first Bastian Lecture Keynote speaker of the school year. He delivered a presentation called “The Complexity of Passing: Maintaining Identity as a Trans Person.”

Ross is a graduate student at Concordia University in Montreal, whose Honours Research Thesis was “The Importance of Passing for Queer Transgender Men: Masculinity, Identity and Safety.”

Before his presentation, Ross spent the day on Westminster’s campus and interacted with students and the community.

“I’m excited to talk about something that many people haven’t really heard or talked about,” Ross said. “The topic that I’m talking about is okay to just talk about, but it’s also important to have a conversation after [the presentation].”

Ross said he had time to visit classes on campus and have discussions with students about trans people and the transgender community. He lit up and grinned, adding that one class even shared cat cupcakes with him.

Later that night, after the seats in Gore Auditorium had filled with people, Levi Rose Barrett, junior sociology major, took the stage to introduce Ross.

The presentation was a two-part lecture, which was first comprised of Ross’s academic research and then moved into his YouTube passion (uppercasechase1).

In the beginning, Ross stated, “I did not choose this life. It chose me. I am one trans person; I don’t represent the entire community.”

Ross delivered a message on why passing is important and the concern of safety for the community. He defined passing as transgender people being seen as their true, inner-gender identity by outside society.

“If the person identifies as trans, they’re trans,” Ross said.

The presentation addressed issues of “Are you trans enough?” and how trans members in the community battle with their identity of what being trans means.

Ross also touched on issues of how to address safety and inclusion from a community perspective in the trans community. He talked about delicate situations such as bathrooms and said all of his research participants have had a bathroom story.

Ross’s presentation wrapped up with applause and an in-depth question and answer dialogue between the audience and Ross.

“I found Chase’s videos two years ago, and it definitely helped me get informed about the trans community but also while humanizing it,” Barrett said. “[The trans narrative is] often such a medical narrative.”

Students and audience members addressed not only what Ross’s presentation meant for the transgender community but also what the college community could do to be more inclusive.

“This doesn’t end here,” Barrett said. “I think it’ll help facilitate more dialogue [and] help people be informed in order to help people move forward. It’s definitely an awesome step, and I look forward to the future. I think that definitely gender-inclusive housing would be great. Implementing a section on the syllabus about preferred pronouns, so people understand.”

Whit Chapman*, first-year graduate student from the University of Utah, gave their input on inclusion in the college setting.

“I think having LGBT resource centers is a start, gender inclusive bathrooms is helpful, having gender inclusive language,” Chapman said. “It’s a lot right. At [the University of Utah], there are a lot of older buildings that don’t have gender neutral bathrooms or single-stall bathrooms. A lot of them are multi-bathrooms and that means I have to go to another building to use the bathroom, which is kind of problematic.”

Chapman said that they are excited Ross is talking about and bringing light to the issue. They said the next step for academic institutions is education.

“I think it’s important for the institutions to educate on the issues and how people can be allies and accomplices toward the queer and trans community, ” Chapman said.

Ross pokes fun at one of his old YouTube videos during his presentation. Ross has become famous in the transgender community for his videos, which explore transgender issues.

She said that, after Ross leaves, it’s important to “continue those conversations and to create habitable spaces for all our students. So that when we talk about preferred pronouns and preferred names, this is not something that’s odd. Not only to faculty, staff and our students, but also so when they leave here that they understand that this is something that they take with them out into the world.”

Ross’s presentation educated audience members on the trans community and got them to discuss how to work toward a more inclusive environment.

Students or staff who missed the presentation can find more from Ross on his tumblr page at chaseross.tumblr.com and also on his YouTube channel uppercaseCHASE1. For more information on Ross’s research in the transgender community, visit concordia.academia.edu/ChaseRoss.

* Whit Chapman’s pronouns are they, them, their.