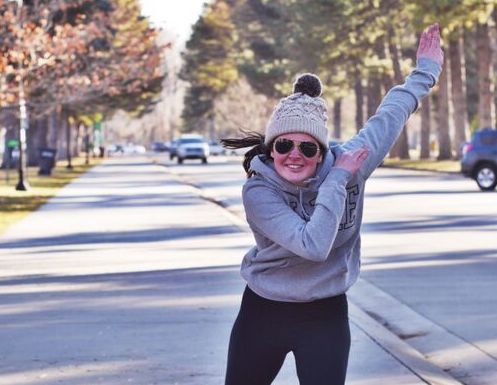 Students and faculty on Westminster’s campus do everything from starting blading groups to performing intricate Acroyoga positions to participating in Ironman races.

Sophomores Emma Crosby and Riley Rohweder are the founders of the lady rollerblading group The Bladies. Made up of four team riders, the group is in its second year and even has an Instagram account to document its adventures.

While The Bladies are now tightly knit, the creation of the group initially came as a surprise.

“I’m pretty sure it was fate. We just met at Liberty Park one day and everything fell into place,” Crosby said.

The Bladies can usually be found at Liberty Park on the weekend or downtown trying to find new places to perform and perfect tricks. Their signature move is a classic, called an Eagle—one rollerblader extends her arms and legs in a star formation over a set of stairs.

Laughs are not the only thing The Bladies provide. Crosby said being in the group also helps her snowboarding.

Crosby is a member of the Westminster women’s snowboard team and said tricks The Bladies perform help her with her form and balance for the upcoming season.

Wai Goh shows off his Acroyoga abilities and muscles with a partner, all while flashing a smile. Acroyoga is the practice of combining acrobatics and yoga and includes positions like preparing for takeoff, high-flying whale and double bird pose. Photo courtesy Wai Goh

The Bladies openly welcome all women who want to join—they just have to pass an evaluation by current riding members.

“We’re looking for ladies with style, agility and, of course, an appreciation for Hilary Duff music,” Rohweder said.

Wai Goh, junior business major, also gets big air but remains on the ground to do so. Goh practices Acroyoga to maintain physical strength and friendships.

“You get a workout while having a blast with friends,” Goh said. “You forget that you are working out, because you’re in the flow [of] a sequence you already know or are engrossed in figuring out a new move.”

Acroyoga is the practice of combining acrobatics and yoga and includes positions like preparing for takeoff, high-flying whale and double bird pose.

Goh first became involved with Acroyoga when a friend invited him to a class last year. Since then, he has been actively involved in the Acroyoga community and even offers private sessions.

“Acroyoga makes financial sense: it’s a cost-free, super-fun practice once you learn the ropes,” Goh said. “You just need another human (or dog, or chicken) to practice with.”

The Westminster community can sometimes see Goh on campus practicing Acroyoga with a partner or alone.

“Any patch of grass or flat ground is ideal for AcroYoga,” Goh said. “I have even done it on top of the goblins at Goblin Valley.”

Sydney Tervort smiles at the camera while crossing the finish line at her first Ironman race in Chattanooga, Tennessee. Tervort is an avid marathon runner but transitioned to Ironman marathons this year and placed third in age division.  Photo courtesy Sydney Trevort

It’s not only students who participate in unique events, don’t forget about the faculty here at Westminster: some of them too take their off-campus activities to the extreme.

Sydney Tervort, managing director of financial affairs, is an iron-woman who is avidly involved with marathons and just completed her first Ironman a month ago.

Tervort first became involved in marathons in 2000, when Westminster President Steve Morgan urged her to sign up for the St. George Marathon. Since that first race, she has participated in 27 marathons and took third place in her first Ironman.

“To me, the events are fun,” Tervort said. “This is where my friendships are. They keep me going and inspire me to finish.”

In 2013, Tervort participated in the Boston Marathon and heard the bombs go off. Although she had finished the race, she was among the chaos but came back the following year to stand with Boston.

“There is a magic about Boston,” she said. “The city and the runners fought back to show they were taking the city back. And I got my [personal record] that year.”

While The Bladies, Goh and Tervort all said they like to get off campus and involved in different areas around Utah and the United States, Westminster will always be their home stomping grounds.