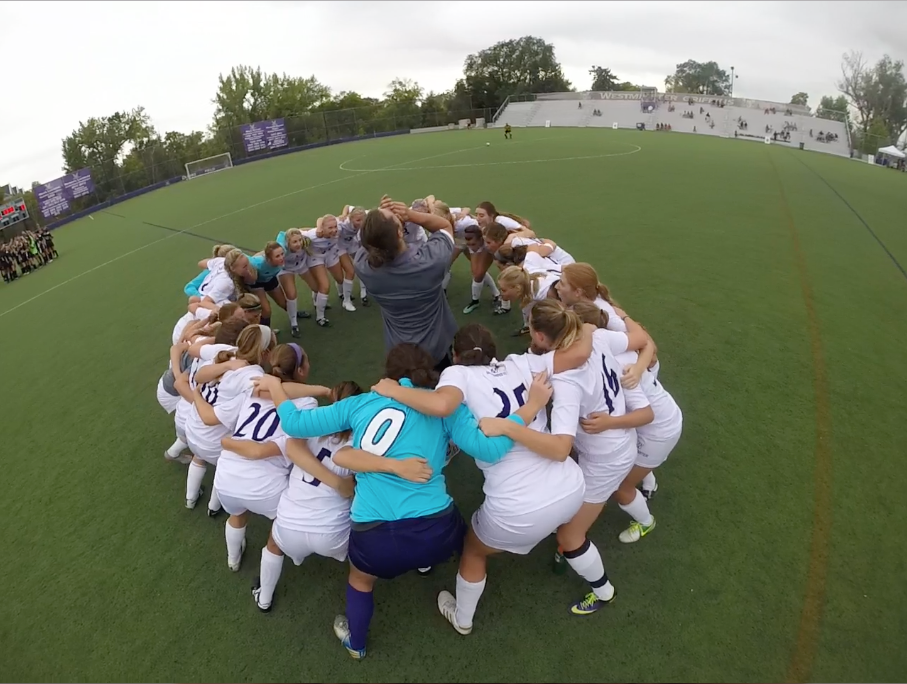 The women’s soccer team has a special ritual before every home game to get them fired up. Assistant coach Nic Duncan leads them in a chant, taken from “300,” that makes the players think of themselves “as gladiators” and the game as “war,” said Molumby.  Photos by Molly Arnold

Westminster’s women’s soccer team begin their warm up in the locker room with a dance party, followed by the song “We Ready” and chant, “We must protect this ‘bous’ house.” After, they become serious, walk onto the field and begin the game.

“Who are we?” Nic Duncan, assistant coach, asks.

“We like to think of ourselves as gladiators, and this game is war,” said Megan Molumby, senior elementary education major and member of the soccer team.

This year is the first time Westminster has competed against DII NCAA teams. With a standing of three wins and four losses in the RMAC and a close game against Colorado School of Mines (the top team in the conference), the girls are happy with the season so far.

Korral Koehler, defensive player for the Griffins, keeps the ball away from a Regis player at their game on Sunday, Oct. 4. This is the first season the women’s soccer team has competed with other NCAA teams.

“We were predicted to get last in the whole conference,” said Maddie Lewis, junior neuroscience major and member of the team. “So, it was pretty cool that [the game against Mines] was so close.”

Their head coach, Tony LeBlanc, agrees and said he expects that the team will continue to compete well with all the other teams in the conference.

“We barely lost, and shouldn’t have lost, to the top team in the conference,” LeBlanc said. “It was a great game and it showed us where we were in this new transition.”

The game against Mines ended with Griffins 0 and Mines 1. Team members agree that it was a good game but know that there is a tough road ahead.

“We will probably finish toward the middle of the conference,” said Abi Yanke, senior accounting major and goalie for the soccer team. “We are new and don’t have much experience with these bigger teams.”

Although the girls are doing well, they have to abide by NCAA rules, which means they cannot compete for a national title for another two seasons. This rule makes it hard for the team to find motivation, however, they get it through the closeness of the team and encouraging each other.

“It’s been a season of getting together and motivating ourselves,” said Molumby. “We can’t have that actual trophy to show our win.”

Coach LeBlanc and the women on the team agree that they are closer than ever this year.

Megan Molumby, defensive player for the Griffins, defends her home field against Regis on Sunday, Oct. 4. The Griffins played three games over the week of Sept. 27–Oct. 4 and finished with two wins and one loss.

“[Our team] is literally just a party,” Molumby said. “We are all truly friends. If you put us in a room, it’ll be a party. You don’t even have to play music—we will make our own.”

Many members think of the team as a family.

“I think our closeness will help when the tough games come, because we are like a family and it feels like we have each other’s backs,” LeBlanc said.

The team has two more games at home on Friday, Oct. 23 and Sunday, Oct. 25, and said they would love the support of fellow classmates.

“We feed off people’s energies,” Molumby said. “So, whether you show up with your face painted or just screaming… it’s going to be a better game when you’re hyped.”