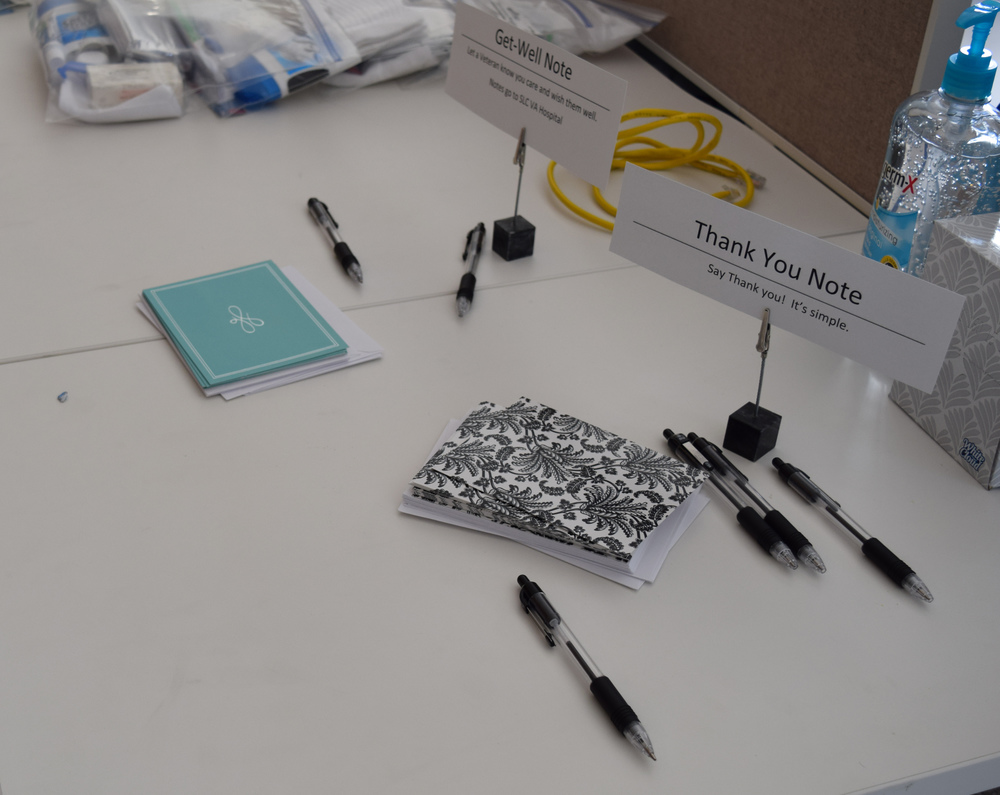 The Center for Veteran and Military Services encouraged the Westminster community to write thank you letters and get well cards and to create care packages for veterans. Sylvia O’Hara, director of the center, said they decided to create items as a way to directly impact the lives of veterans in the community. Photo by Rachel Robertson

The recently opened Westminster Center for Veteran and Military Services held an open house on Nov. 11 to honor veterans in the Westminster community and beyond.

The table at the Veterans Center was filled with care kit supplies that held razors, deodorant, a blanket, socks and more. The Westminster community was encouraged to come in and recognize Veterans Day by writing thank-you letters and get-well cards and creating care packages for veterans, including homeless care kits.

For O’Hara, the recognition of Veterans Day is based around the stories of individuals—she discussed relating the day to bigger issues of breaking stigma and addressing biases, a goal reflected in the creation of homeless kits at the center.

“There’s a huge stereotype about what a homeless veteran is,” O’Hara said. “I would encourage [students, faculty and the Westminster community to] go read a story. Oprah just followed a female, homeless veteran—like go look that up. Be a little more informed instead of just wearing like a lapel pin. Actually take time to read someone’s story. That’s what’s more impactful.”

Overall, Veterans Day is often employed as a time for students and the community to reflect on the service of uniformed officials.

“Veterans Day is really about the broader idea of a veteran and what that means,” O’Hara said. “Like [recognizing] what that veteran sacrificed very much at their own expense and that broader idea of trying to do something honorable and selfless in a way, like you chose to do this on your own.”

The Westminster community was encouraged to come in and put together the packages for the veterans. O’Hara said the reason they chose to craft homeless care kits and thank-you cards is the meaning that they have.

“The reason we chose to do this is because it is directly impacting a student—rather than having like a more formal event—[because] all these kits are going to go to local veterans and will actually impact them, versus just talking about how veterans are important and how we should do something,” O’Hara said. “We wanted to do something.”