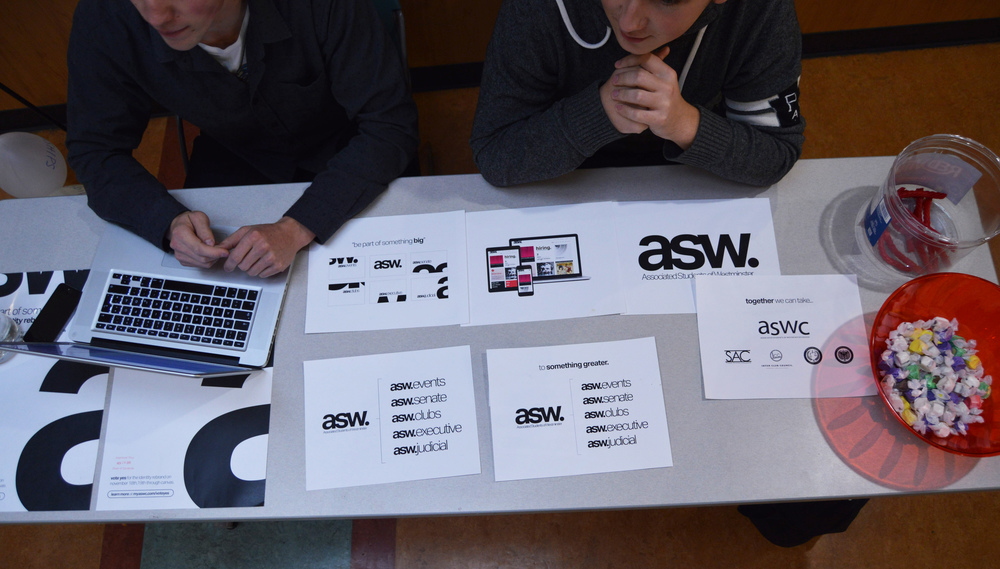 Members of ASWC table in Shaw to promote the rebranding and redesign of student government. If the change is approved by the student body, ASWC will become ASW, due to the possibility that Westminster College will become a university in the coming years. Photo by Rachel Robertson

Ever think SAC was different than ASWC and student government? Many students did. The Associated Students of Westminster College (ASWC) is rebranding to create structural cohesiveness, a change that will launch in the spring.

The main problem that ASWC cited with its old structure was that most students didn’t understand the branches of student government were all part of ASWC.

“Currently, the names of the different branches of the student government are confusing, and the overall structure is not transparent to the average student,” said Costa Lasiy, ASWC president. “This is not how a government that is supposed to represent its students should display itself.”

This is where David Herzog, director of communications for ASWC, came in. He was put in charge of heading the complete redesign to turn ASWC into ASW, Associated Students of Westminster.

Herzog, senior marketing major, has been part of the student government for four years and has “just been seeing these inconsistencies.” He explained that one of the main problems was that the Student Activities Commision (SAC) wasn’t being seen as part of ASWC.

“We weren’t seeing appropriate recognition,” he said about ASWC as a whole.

ASW, no longer ASWC because of the possibility that Westminster College will become a University within the next few years, will remain the same as far as structure. Its five branches, including SAC, Inter-Collegiate Council (ICC) and the judicial branch will remain the same.

Another problem the committee faced was that the branches were increasingly separating, “which shouldn’t be the case because we are all working on one goal and getting funds from the same place,” Herzog said.

Many members of ASWC are excited for the rebrand.

“I think it is a wonderful idea that will not only eliminate confusion…but also, in my opinion, possibly help raise student involvement,” said Ian Troost, ICC president. “[Students] may not get involved because it’s confusing. I think it’ll appear to students that there will be more avenues to get involved with student government.”

Other members of ASWC have similar hopes.

Sarah Hirning, SAC president, said she hopes the redesign will “have more students involved in student government and [realize] how many opportunities there are.”

The redesign has been approved by the school Senate and will now proceed to a majority vote from students. The voting will take place Nov. 18–19 on the ASWC website.

If the redesign is approved campus-wide, ASWC will be completely rebranded as ASW when the campus opens for Spring semester.

Voting and more information can be found on the new ASW website myaswc.com/portfolio/aswc-identity-rebrand.