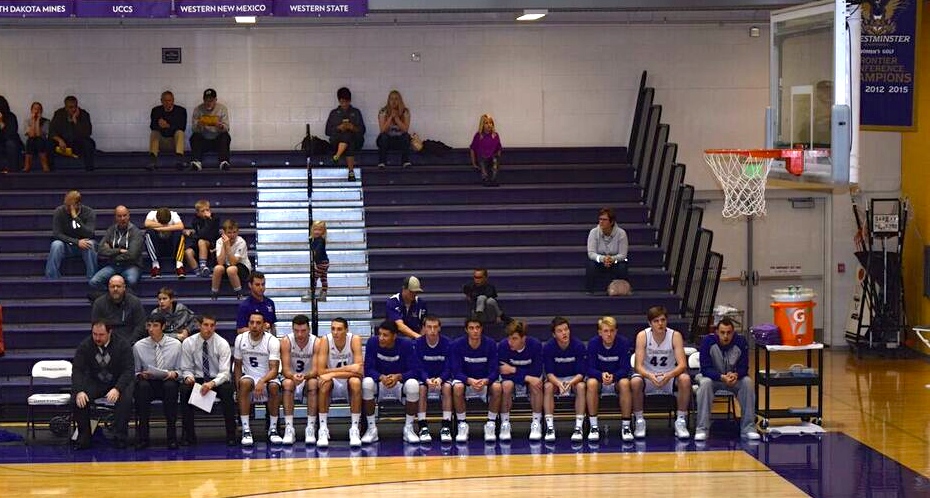 The Westminster men’s basketball team sits on the bleachers at their home opener game against The College of Idaho on Nov. 4. This year, the team has been adjusting to new leadership — under the direction of Head Coach Norm Parish — and to playing in a new conference. Photos by Catherine Blakemore

Basketball is back with some new faces and challenges.

The men’s basketball team is led by head coach Norm Parrish in his debut season, playing in a new conference and having to find ways to set goals with post-season play already ruled out.

Getting a new coach this year has been both a shock and surprise for Kenny Woodard, a member of the team and senior justice studies major.

“We have gotten a guy with a long résumé, and he knows the game,” Woodard said. “He has had great success so far, and I like him.”

Casey Evans, junior public health major and member of the team, is excited about the change, as well.

“When I started my freshman year, I felt we were a bunch of individual players,” Evans said. “But now, we are more of a team. I feel it has a lot to do with the guys we have on the team now and the coach. I have been able to see a team of individuals become a family.”

Other members of the team said that Coach Parrish has pushed them to give each game their all.

“The former coach was very good at coaching, but Parrish has been able to get to all of us as players to bring the most in each of us in terms of our competitiveness in our will and desire to win—which is a big difference,” Evans said.

Parrish is entering his first season with the Westminster Men’s Basketball Team for the upcoming 2015–16 basketball season, and some of the players have noticed Parrish’s new coaching concepts.

Griff, Westminster’s mascot, cheers on the men’s basketball team at their Nov. 4 home game. Griff has the head and wings of an eagle and the body of a lion, and is a staple at Westminster sports events.

“As far as offense and defense, the concepts are bit different,” said Woodard, member of the team. “We run different plays to a much tougher offense. So far, it is good and it works, and everyone is on board of what we are supposed to do.”

This year, the team will compete as a provisional member of the Rocky Mountain Athletic Conference, one of the toughest division two conferences in the country and an exciting change for the team, Woodard said.

“It’s exciting because it’s more competition,” Woodard said. “It’s a higher level, playing against bigger people and we are traveling to different spots than we did last year. It’s a big transition. It’s a tough one but it’s an exciting one, and we just have to work hard every game. It’s not going to be easy.”

Coach Parrish said he is excited that the season has started and that he is looking forward to seeing what the team can accomplish this year.

Ever since Westminster went through the National Collegiate Athletic Association (NCAA) transition, the men’s basketball team is not eligible for postseason because of NCAA rules. However, this does not stop the team from putting in the effort and motivation needed to play.

“Our goal this year is to be a player in the RMC,” Parrish said. “We are now picked 15 out of 16. Obviously we want to finish higher than that. When a team plays us, we need to play harder than them and more physical and hopefully make less mistakes.”

Woodard, member of the team, said he likes the change of not being eligible for postseason because it is a better conference of competition. He said it will be a good change not only for the team but also for the program in the long run.

“Not being eligible for postseason, I have kept myself motivated for the love of the game and to better ourselves each and every day—practice and game,” he said.

Evans, another member of the team, said he is most excited to see how the new team-oriented mentality and passion that they have will translate into their performance.

“I am really happy with the team that I have around me,” Evans said. “We are all competitive, which is hard to find. Usually, you will have a couple of guys on the team that want to win, but everyone on the team wants the team to win. It is refreshing and exciting.”

Team members said they encourage the student body and surrounding community to come out and support them at home games.

The team returns home after Thanksgiving break to take on Colorado Mesa at Behnken Field House on Saturday, Dec. 5.