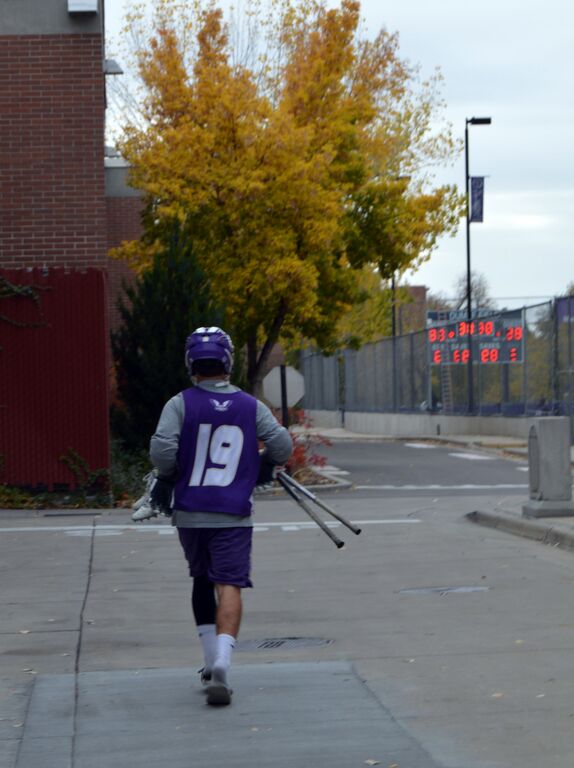 Dominic Conti returns to Dumke Field after an ACL injury that ended his season early last year. After a long recovery, Conti is finally ready to get back on the field. Photo courtesy Dominic Conti

It was the second lacrosse game of the season, and Dominic Conti heard a loud pop.

He tried to jog slowly to the sideline, but his left leg “noodled” on his first step. He said he immediately realized that something was wrong.

The next day, Conti went to the hospital to see a doctor for an MRI to check for any damage to his knee. While he waited for the result, the doctor came out with a brace in his hand.

“Here you go—here is your next six weeks,” the doctor said.

Conti said the first thought that went through his head was, “Now my season is over.”

The screws in each of Conti’s feet serve as a reminder of where he’s been and what it’s taken to get where he is now.

Number 19 on the men’s lacrosse team, Dominic Conti, senior marketing major, came as a first-year student and a walk-on for the lacrosse team, where he found his position in defense and midfield.

Conti is also involved off the field, where he serves as the vice president of the NEST—the student section at sports events—and works as an athletic training staff.

“I came to Westminster because I always wanted to play college sports,” he said. “It has always been my goal since I was younger, and Westminster was the best fit for me [for] academics and the prominent lacrosse program.”

Conti said representing purple and gold in athletics and academics is his way of showing his Griffin pride both on and off campus. Conti started playing lacrosse in seventh grade and played through high school before he decided to continue his career at Westminster.

In the second game of the year, Conti was injured in a face-off in the fourth quarter. The ball was flicked out toward the sideline, where he and an opponent chased it down. The opponent went to flick the ball back, and Conti went into a wide stance. Both players turned to look for the ball, Conti’s knee popped and he went down.

Dominic Conti lays in the hospital bed after his surgery on his ACL with his dad by his side. Conti’s injury, which took place on the lacrosse field, ended his season. Photo courtesy Dominic Conti

This was the first time Conti had to sit out a game because of an ACL injury.

“It was crazy going from every day activity to not being able to walk,” Conti said. “It was like I had to remember how to walk again. It was rough.”

The disappointment with injuries within a team is like a puzzle—when a piece is missing, it’s difficult to put together, said Mason Goodhand, men’s lacrosse head coach.

“The disappointment was the first piece because [Conti] is a player,” Goodhand said. “He makes other people play better because he is on the field and communicating and thinking ahead of the game. I wish I had five more like him. He has the physical and mental [skill], along with a positive, strong attitude, which ties it all together.”

Conti said the support of his teammates helped him through the difficulty of his injury and inability to play with the team. He said has taken the opportunity to be there for his teammates by offering his help through homework or lacrosse-related questions.

“Having their support was a big deal,” Conti said. “Knowing a lot of them [were] expecting me to come back the same way I left—and embracing me as if I was never hurt by encouraging me was a big influence for me to work hard to get back.”

Ethan Gosselin, sophomore nursing major and Conti’s teammate, injured his ACL before Conti. Gosselin said Conti was able to help them both get back on the field together.

“Instead of bringing each other down, we turned our journey together into a little competition to see who would come back the fastest,” Gosselin said. “We were both working with the same personal trainer a lot of the same days, which helped us to encourage each other to get back on the field. [Conti] was the teammate who helped me get there.”

After six months in recovery, Conti was cleared for action two months ago and finally took his brace off. His initial strategy was to jump right back into the game, but it didn’t take long before he understood he had to take a few steps back before he could give it 100 percent.

Dominic Conti,  senior marketing major and number 19 on the men’s lacrosse team, prepares to walk on the field for one of his first games since his injury. In addition to playing lacrosse, Dominic also serves a position as the Vice President of The Nest and works as an athletic training staff on campus. Photos by Tonje Sekse

“Conti is a great teammate,” Gosselin said. “We went to the same high school where we played lacrosse together as well as [played together] on competitive teams later on. [Conti] is a very positive and encouraging teammate and wants the best in everyone.”

In the meantime, Conti has had time to focus on things other than lacrosse.

“I picked up more work hours to help out as much as possible and focus on little things, [such as being] more organized, having time management, and eating healthier, which was a big one when laying around for three months,” Conti said.

Conti’s coaches and teammates have taken notice of his quick comeback.

“Dominic Conti is one of the most selfless people I know,” said Jake Berard, neuroscience major. “He would give you the shirt off his back if you needed it. [His] comeback this season has been much awaited by the team, especially the defensive unit. He will fill leadership roles both on the defensive side of the ball, on the field and the locker room as a seasoned vet.”

Nine months after his injury, Conti said he is ready to take his first steps back on the field with number 19 on his chest and play again with his team at a higher level of competition.

“Seeing him come so far after he injured himself [has] been impressive,” said Gosselin, Conti’s teammate. “He is stronger than before and is going to have a great season in front of him.”