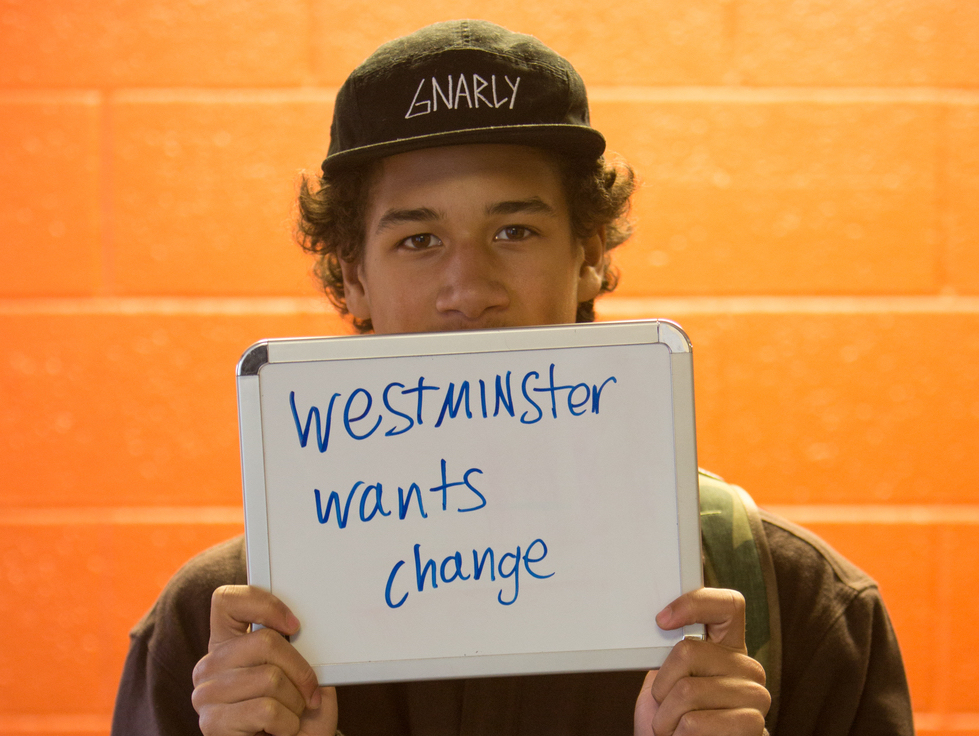 In reaction to an October article, The Forum asked students, faculty and staff about diversity and inclusivity on Westminster’s campus. The general consensus among those interviewed was that Westminster still has room for improvement in creating a safe environment. Here, Alex Cooper, a Westminster sophomore, voices his opinion on the matter. Photos by Blake Bekken

Inclusivity and diversity are hot-button issues at universities across the country, including Westminster—as evidenced by the response to a recent Forum article about the inclusion of members of the Church of Jesus Christ of Latter-day Saints (LDS) on campus.

The previous article, which spoke about the college’s goal to showcase itself as an option for LDS students, garnered many responses from the Westminster community.

“Westminster College’s strength lies within the diversity of the school’s student body on a national level,” commented Susan Auchincloss, mother of student Sarah Auchincloss, on the Facebook post of the article. “The state of Utah does not need another homogenous academic institution looking to educate its own. It is important to consider national figures before considering ‘to be more inviting’ to one group or another.”

Many of the other commenters echoed this sentiment and said that Westminster is, and should seek to be, diverse and inclusive of everyone.

Alice Pugh, senior sociology major, had questions after the first article published in October. Pugh commented that she didn’t think Westminster needed to be focusing resources on making itself a safe-haven for LDS students. She said LDS students already have a plethora of options in the state that people from other religious backgrounds do not.

“A dominant group cannot claim discrimination or oppression when they have full political and social control,” Pugh said.

In response to the October Forum article, Westminster College President Steve Morgan said some criticism may have come from misconceptions about Utah and the fact that Westminster recently inaugurated its first LDS president.

Morgan has worked at Westminster for 34 years and said he doesn’t want to change the Westminster culture. Ultimately, he said he wants a community of respect.

“I don’t think we want to have too many of any group of students,” Morgan said. “It’s the richness of the diversity that we’re most interested in.”

The director of the Westminster Latter-day Saint Institute, Rex Pond, said the responses to the last article seem like unfortunate misunderstandings.

President Morgan and Vice President of Enrollment Management John Baworowsky said that Westminster markets itself in a certain way, depending on students’ interests.

“By targeting individual subgroups, we achieve diversity,” Baworowsky said. “All kinds of marketing is target marketing.”

Specifically, Westminster looks at an individual student or target audience and figures out how to market to those individual groups, Baworowsky said.

Westminster does many things to create diversity, Baworowsky said, such as marketing to Jewish students, aviation students, out-of-state students and nurses.

“When you add all that up, you kind of get a mosaic of different types of groups,” Baworowsky said.

When working to attract diverse groups, President Morgan said in-state and out-of-state students sometimes have a stigma about Utah when considering Westminster as an option.

“To an out-of-state student coming to Utah, there is worry, ‘Am I going to be evangelized?’” Morgan said. “For in-state students, there might just be the opposite stigma: ‘Is Westminster a safe place for me to go as an LDS kid? Am I gonna be disrespected?’” 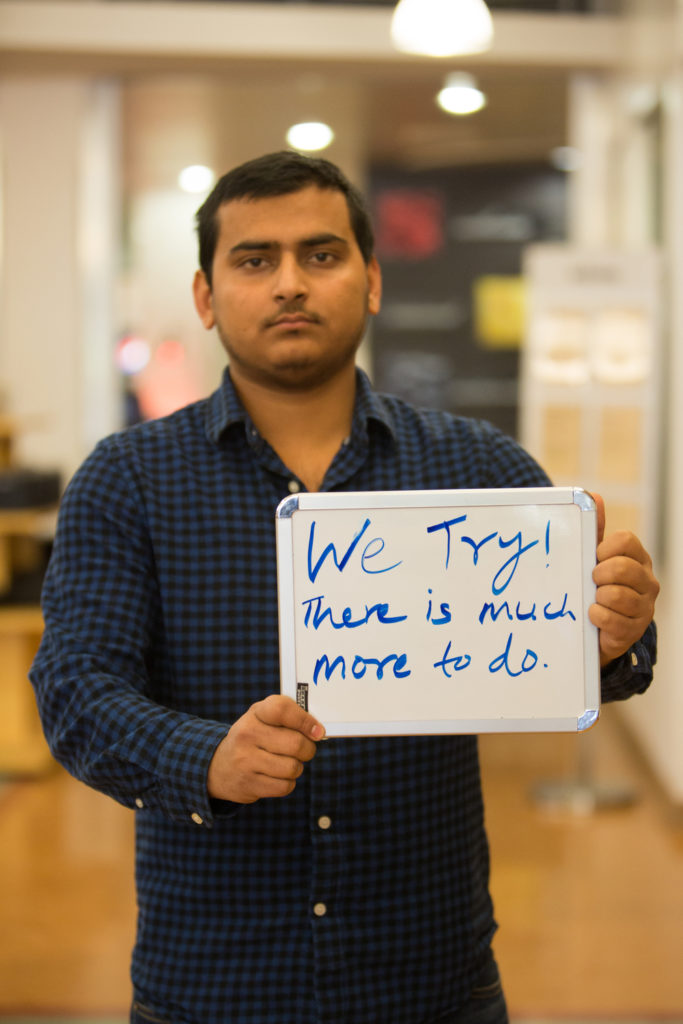 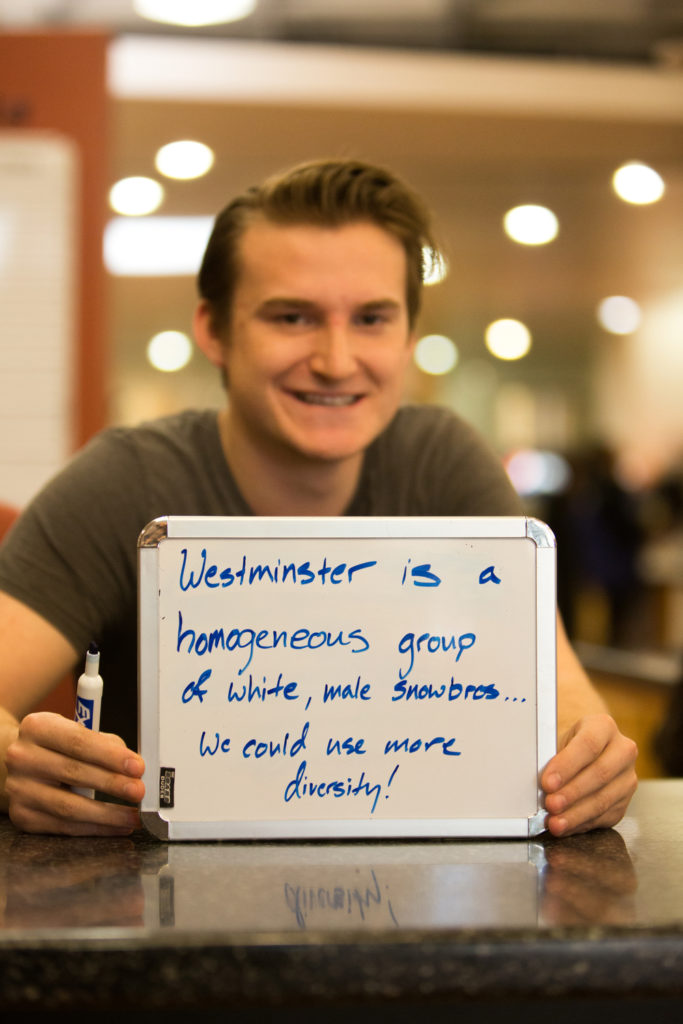 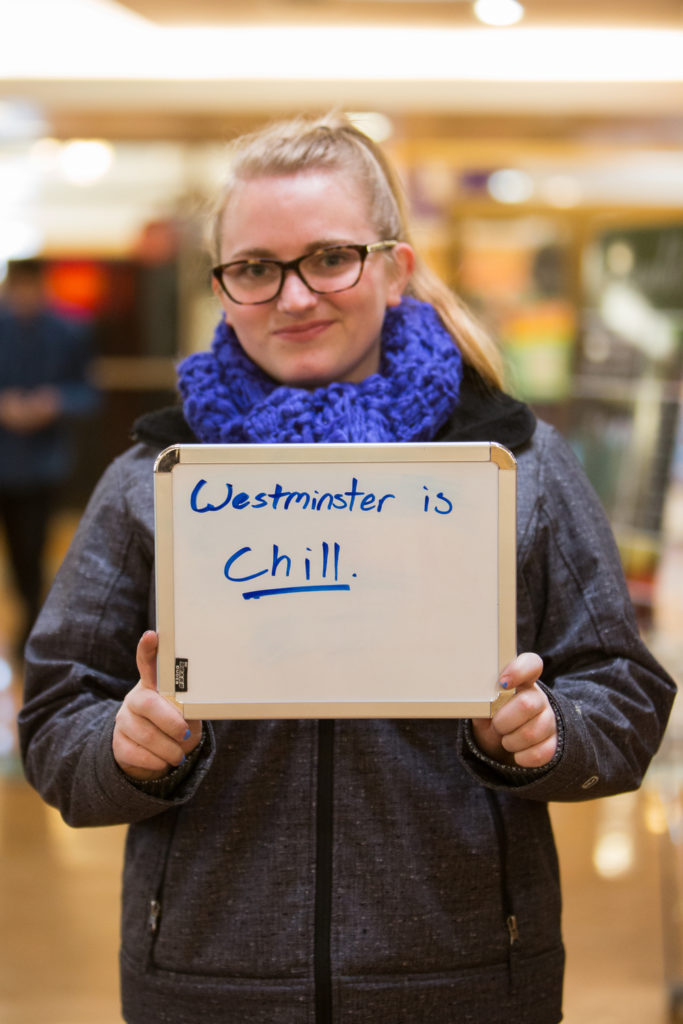 Diversity and inclusivity on campus

This fear of disrespect is not limited to LDS students but is also felt by other religious students at Westminster—both in- and out-of-state—according to Michael Popich, professor of philosophy and world religions, who has taught at the college for 34 years.

This tendency for religious conversations to escalate can begin with the push and pull between science and religion, said Jan Saeed, Westminster’s director of spiritual life.“There is this perception that you are either scientific or religious and that they do not mesh,” Saeed said. “I do not believe that. Science and religion are two sources of knowledge and both are constantly evolving and changing.”

Some religious students at Westminster said they have felt a lack of inclusion.

“Westminster is not particularly inclusive of religious students,” said Kendra Johanson, sophomore biology major and Seventh-Day Adventist. “I think they are very inclusive with regard to people of different sexual orientations/preferences, which is great. But with regard to religion, they tend to not be as inclusive and supportive.”

Although some students feel more faith-specific clubs are the answer, Saeed said this segmentation could hinder inclusivity.

“I think we try to be inclusive, but there’s also a tendency to go where we are comfortable,” Saeed said. “So, even though we have opportunities to connect with people that are diverse—have diverse thoughts, religions, beliefs—there is a gravitation toward where we feel comfortable.”

The International Club has been able to combine the comfort of familiarity with an educational experience.

“I’m a member of The International Club, and annually we have festivals,” said Hasib Hussainzada, junior finance major. “Westminster students get to experience a little of the culture and food. I see people from every background, from different countries, religions and they hang out together. It is inclusive.”

Historically, people are discouraged from discussing religion because it may not be seen as a polite topic of conversation and causes conflict. Popich, professor of philosophy and world religions, said he wants to move away from this.

In his opinion, the solution to religious inclusivity—and inclusivity of all kinds— safe discussion.

“I think the biggest part about feeling included is that you can talk about your beliefs and not feel like you have to defend them or that anything you say about someone else’s beliefs is immediately taken as critical when you don’t mean it that way,” Popich said. “We need to create a safe haven for conversation.” 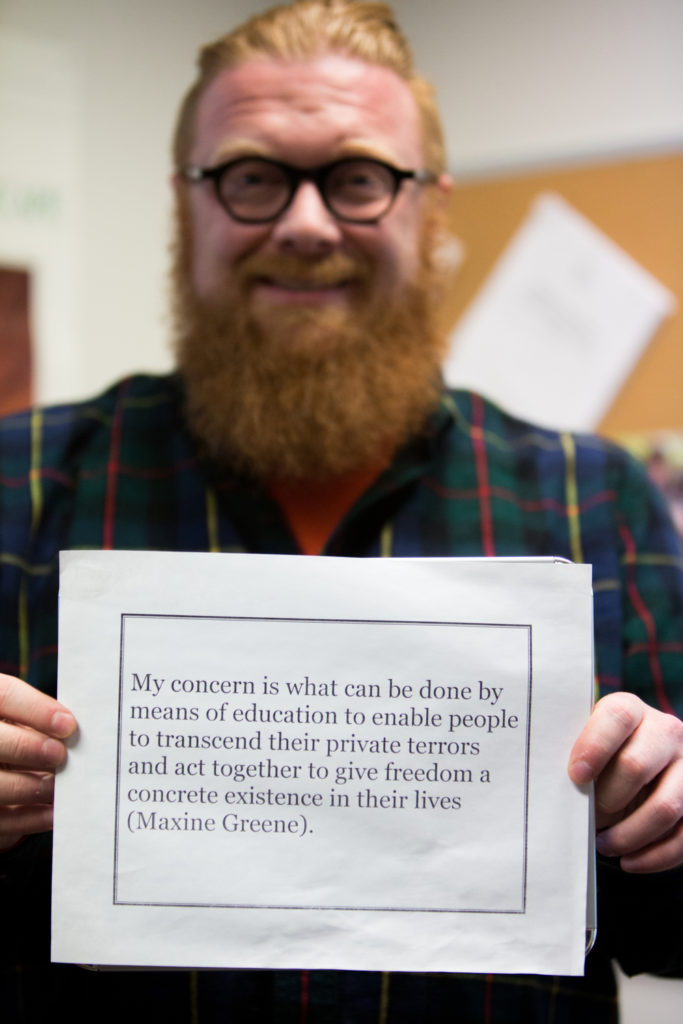 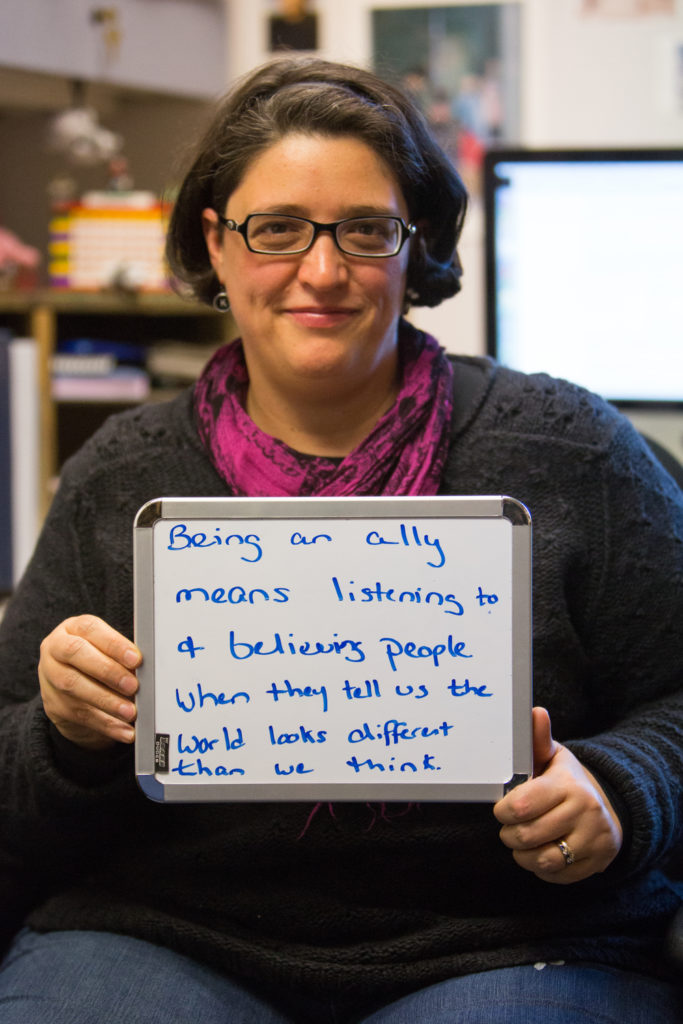 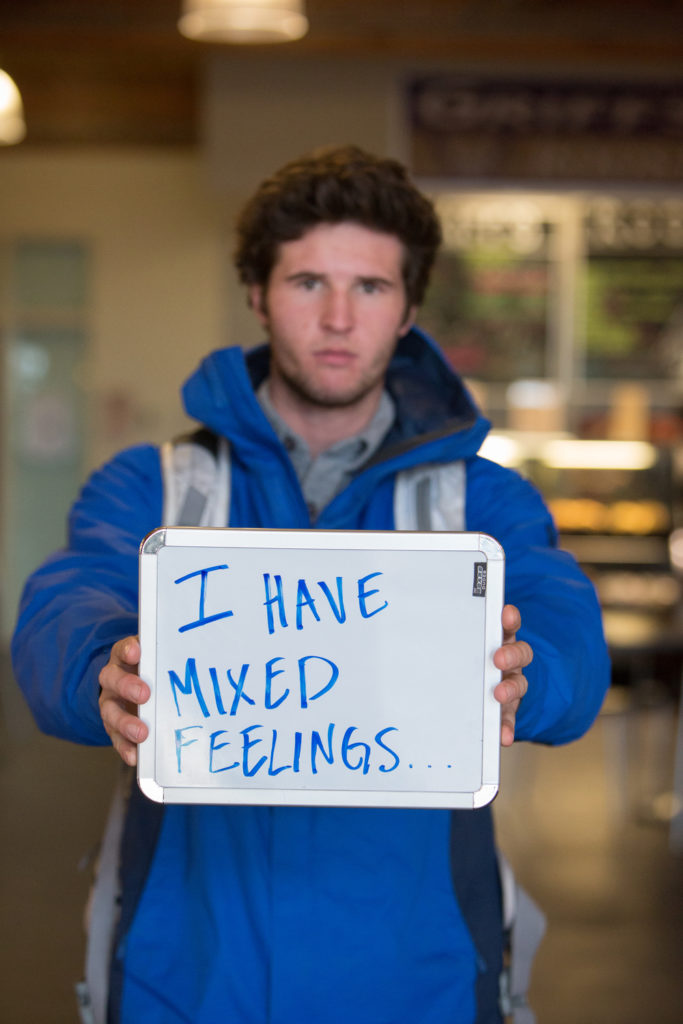 He proposed taking a cue from the Office of Spiritual Life and creating a more permanent, regular version of the Coexist Cafe, a safe place where students of all faiths—or no faith—can come together to discuss religion and religious differences with moderators.

“[Westminster] is a natural, neutral place: an independent, private liberal arts college,” Popich said. “If you can’t talk about ideas—controversial or not—at a place like this, where can you? This is an ideal place.”

Saeed, the host of the Coexist Café, echoed Popich’s thoughts.

“Inclusivity is about allowing us to have and create spaces for students that are very diverse to come together to learn from each other as well as learning from the curriculum,” Saeed said.

Something Popich, professor of philosophy and world religions, said he stresses in his classes is that students don’t have to agree with or believe one another’s faiths, but they do need to understand.

“Part of being at a liberal arts institution is that you start to see things in a much more pluralistic way,” Popich said. “You begin to see lots of grey in the world. You understand that people are different, but that doesn’t make them better or worse than me.”

This pluralistic view of the world comes in large part from Westminster’s push for diversity—a topic that goes hand-in-hand with inclusivity.

In higher education, discussions about diversity are often centered on how institutions reflect the communities they serve and if there are underrepresented groups, according to Scott Gust, an associate dean for diversity for the School of Arts and Sciences.

“Definitions of diversity, in order to be meaningful, need to be about equity, fairness, balanced representation and opportunities,” Gust said. “That’s typically how we think about ‘capital D’ diversity in higher ed. It’s important to consider how the school reflects the communities they’re serving and the communities students come from.”

Gust stressed that there’s a difference between Diversity and diversity. “Capital D” diversity considers issues of race, disability, sexual orientation and gender, among other hot-button issues—these are the forms of diversity the college is working to represent, Gust said.

Although Gust acknowledged the work the college is doing, he said he thinks there’s room for improvement.

“Ultimately, I think at this particular moment we’re not doing enough,” Gust said. “The world is moving more quickly than we are. The things we’re doing are good, but there’s not sufficient urgency. None of it is sufficient to keep up with the rising tide of change—and Westminster is certainly not alone in that.”

Gust said it’s important for students to “see themselves” at the college and need role models.

“Seeing someone that looks like you is a really good way of making people not feel alienated,” said Tashelle Wright, senior public health major and president of the Black Student Union. “I don’t see a lot of students that look like me, and the ones I do see seem like they try to assimilate and they don’t want to stand out, for whatever reason that may be.”

Minority students have found that, not only are they alienated, but also have to represent an entire group.

“It is very easy to disappear and feel alienated when you are expected to speak for your whole race, gender, class, or sexuality,” said Alaa Al-Barkawi, sociology and English double major. “I can see that the school does work hard to welcome students of all backgrounds, however, we still have a lot of work to do.”

Al-Barkawi said that Westminster’s academics can sometimes lack in diversity.

“One way schools can seek more diversity is to add diversity within the subjects we’re being taught,” Al-Barkawi said. “Our textbooks need to be more inclusive, as well as the subject matter of classrooms.”

Some faculty also recognize this and are working to make Westminster a more representative place.

“Students from minority backgrounds are more likely to be recruited and stay at places where they see their cultural identity validated and affirmed,” said Gust, associate dean for diversity. “They see people as professors who look like them. They take classes that include content that’s relevant to their community. There’s an urgency for role models.”

Studies have shown that this diversity in faculty is beneficial for everyone, not just minority students, according to Gust.

“All the evidence shows that a diverse education is a better education for everyone,” Gust said. “It’s more reflective of what you need to know and how you can be prepared to succeed in what the world actually looks like today.”

President Morgan and Westminster faculty, staff and students said they hope to continually work toward a diverse, inclusive campus.

“I think inclusivity is a constant process, and we can’t say we’ve made it,” said Saeed, director of spiritual life. “We are trying to be inclusive. How we help all students feel welcome is going to be a very positive part of this new administration, and yet it will be challenging.”