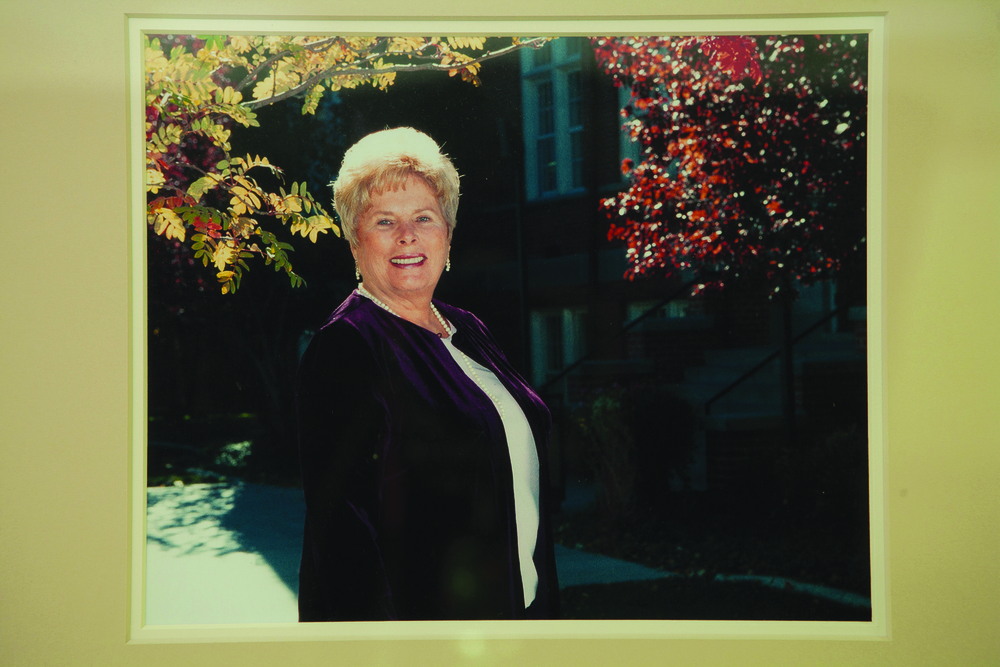 President Peggy A. Stock (1995-2002) was Westminster’s 15th president and Utah’s first female president of the college. Stock helped get the college out of its financial crisis and made it one of the best places to work for in the state, according to Utah Business Magazine. Photo by Alan Tinkle

Westminster College recently celebrated its 140th birthday. The celebration was filled with remembrance of all of the great accomplishments the institution has seen.

However, there are some blocks of history that the average Griffin may not be aware of in regards to their school. Say, for example, donkeys in the Payne Gymnasium during a faculty versus student basketball game tradition.

Donkeys: Yes, Westminster basketball players used to ride donkeys during games. However, this tradition lasted only one year.

Another note about Payne’s history is that the Utah Jazz practiced there from 1979 to 1999.

The long lost football team: Beginning in 1919, Westminster had it’s own football team, The Fighting Parsons.

According to an old 1958 Forum article (previously known as The Parson), the team fully flourished in the late 50s through the 60s.

During the 1957–1958 season, the team had an 8-0-1 record, with the most memorable game of the season being against the Montana Mines, with The Parsons winning 90-0.

This was the seventh out of nine games where The Parsons held their opponents scoreless.

There have been attempts at reinstating the team, but mostly from alumni. According to Susan Heath, associate athletic director, the resources that the college has for athletics is being fully used toward the teams that are established currently.

“Football certainly has a rich history at Westminster,” Heath said. “All athletic teams, including football, were eliminated in 1979 when the college was in deep financial trouble.”

It wasn’t until the 1990s that the college began reinstating athletic teams, however, football has never fully returned since The Parsons days.

Stock was famously known to say that the college was a “wonderful jewel that needed polishing.”

When Stock was hired, the college was just coming out of its financial turmoil. By 2001, Utah Business Magazine named Westminster College one of the top five companies to work for in Utah.

“Her greatest accomplishment was having the whole college community realize what a great college we are,” said Ginger Giovale, chair of the Westminster College Board of Trustees in an article on Westminster’s website. “Peggy convinced everyone, and this affected all aspects of the college.”

In 2001, Stock reluctantly announced her retirement due to health problems and wishing to spend more time with her husband, Bob Stock, and their family.

The fire: On March 12, 1926, Converse Hall was set ablaze by what some say was spontaneous combustion.

The building lost its 14,000-volume library, which was said to be one of the finest private collections in the West at the time, as well as science labs and multiple classrooms.

A week later, former Board of Trustees President Payne quickly raised $50,000 for the reconstruction.

After one summer of rebuilding, Converse reopened in September 1926.

Ghosts: Some have said that three ghosts haunt the campus: The Woman in White, The Mother and The Ghost of Hogle Hall.

It is said that these specters can be seen on the third floor of Converse, near Nunemaker Place and the second floor of Hogle Hall.

To read a full account of each of these ghost stories, visit wcforummedia.com and search “Ghost Tales of Westminster.”

Salt Lake Collegiate Institute: This was the original name of Westminster during its opening in 1875 while it was still a preparatory school.

The First Presbyterian Church of Salt Lake City founded the institute, and in 1897, the school began to offer college classes and changed its name to Sheldon Jackson College, named after a Presbyterian minister.

It wasn’t until 1902 that the college trustees adopted the name “Westminster.” This was to better reflect a more Protestant education. The name came from a district of London where a Presbyterian confession of faith originated from.

During 1974, the college severed all ties to the Presbyterian Church.

Students, faculty and staff continue to make history at Westminster. From donkeys to ghosts, Westminster has experienced a saga that some may say make it “a unique environment for learning.”