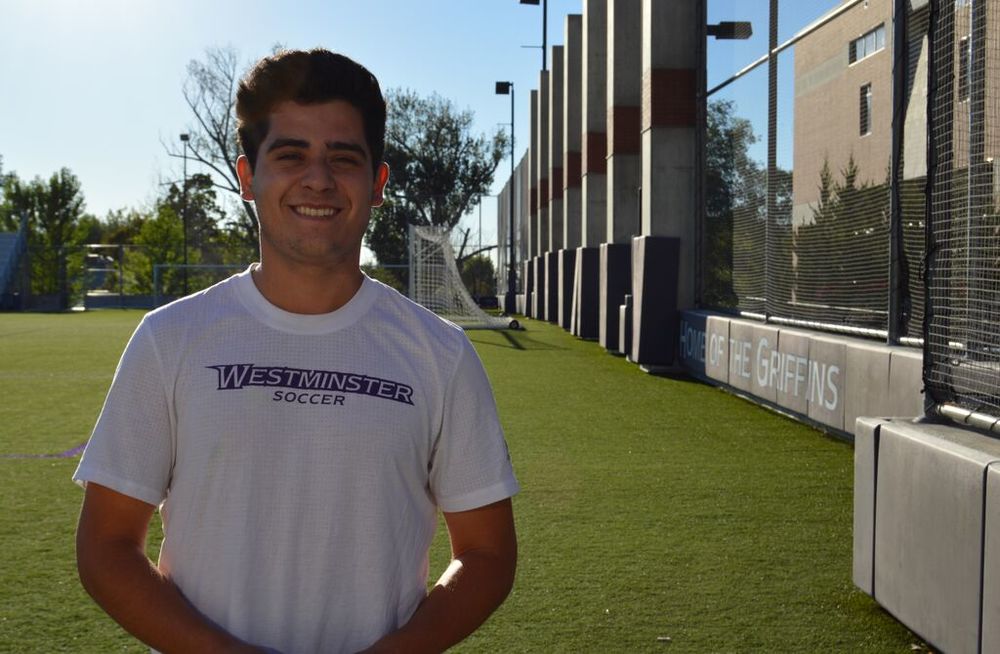 Athletics is one of the main things Emilio Giokas does at Westminster. He plans tailgates as Athletic Chair for SAC, leads his teammates as captain of the soccer team and encourages many students to attend athletic events as president of the NEST—Westminster’s student cheering section.  Photos by Rachel Robertson

Emilio Giokas has carried a large cooler of Otter Pops, thrown out T-shirts at the job fair and dressed up as an ESPN reporter, all to increase student interest in athletic events.

“The sports world is what I do here at Westminster,” Giokas said.

Giokas’ involvement in sports started his first year at Westminster when he joined the soccer team and began attending all the Griffins’ games. He joined the Nest after going to a few games and became president his sophomore year.

The amount of work Giokas does can get hectic from time to time, he said. However, he gets by because he loves what he does.

“In a way, I suppose it’s kind of selfish (what I do), because I enjoy doing it,” Giokas said.

Emilio Giokas has attended almost every game, tailgate and event he could over his past four years at Westminster. His schedule can get hectic from time to time, he said, however he gets by because he loves what he does.

Giokas’s main goal over the past few years has been to raise student involvement in sports. He and other members of SAC plan tailgates and themed games to gain student interest.

His favorite was a Halloween-themed women’s volleyball game he went to his first year at Westminster.

As captain of the soccer team, he spends his time after practice encouraging his teammates to attend other games.

“If we support them as a team, they will support us as a team,” Giokas said.

His teammates agree that Giokas does heavily encourage them to attend other events.

“Following pretty much every practice, he gives us an update on what is going on with the other sports teams,” said Jacob Smith, member of the soccer team and junior communication major. “[Giokas] lets us know we should all come out and support whatever team it may be.”

Giokas tells the team that, if they have time, they should at least come for the first half. Most team members come, get sucked into the game and stay the whole time.

“Ever since I’ve known him, he’s been inviting everyone around campus to attend any athletic event,” said Nate McDonald, junior management and marketing major and teammate of Giokas. “[Giokas is] hardworking. He is heavily involved….and I know how much time and hard work it takes to do what he does.”

The Student-Athlete Advisory Committee members have talked about setting up a rally through campus. The team would start at Converse Hall and walk around campus to get students who live on campus to go to the game.

“Don’t think of attending a game as a time commitment but going to have some fun and relax from doing homework,” Giokas said. “It’s always fun to support, and you may end up liking something and really becoming a fan of it.”

Although Giokas does a lot for athletics, teammates are confident they can keep the support they give to other teams.

“As far as when he graduates, attendance of games won’t decline,” said McDonald, a teammate of Giokas. “However, the next person will have large shoes to fill.”