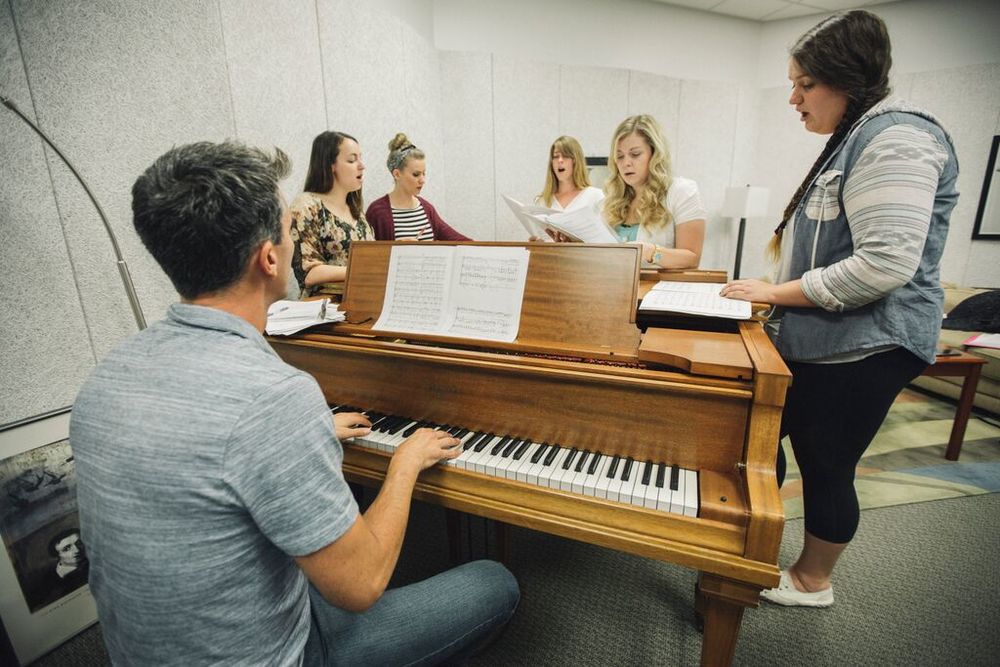 Westminster has its eyes and ears open for the school’s newest mixed-voice a cappella group, SugarTown.

Auditions took place during the first week of school, where students competed for 12 spots in hopes that their voices would join the team.

Michael Chipman, assistant professor of voice and faculty director of SugarTown, said he was thrilled about the attendance for the open auditions that took place Aug. 20–21.

“We had about 30 people audition for 12 spots,” he said. “Twelve singers and one other person doing beatbox. We ended up picking a fantastic group of singers. They are all coming together in an exciting way to make this happen.”

Jessica Hobbs, president of the group and nursing major, is one out of the three other members that is not enrolled in the music department.

“I feel kind of like the outsider,” she said. “I am a nursing student, and I feel I am the only one that’s not been in the music building before. I still joke about that I am new there.”

After reading the audition email, Hobbs said she started joking about auditioning for the a capella group and that she would not end up showing up. In the end, she decided to give it a try.

“It was one of my terrifying moments of my life,” she said.

After coming from the University of Utah, Hobbs said she was at first hesitant to be involved in campus activities.

“Westminster has been an incredible changing experience for me,” Hobbs said. “It has made me do things that I normally wouldn’t do. I would never have done it at the U, ever—in a million years.”

Tanner Gilgen, a member of SugarTown majoring in vocal performance, said he is eager to be a part of the group.

“Michael [Chipman] told me he was starting the a capella group and gave me the rundown of what it was about,” said Gilgen, who is also a member of the opera studio and the chamber singers. “It sounded like a cool and exciting opportunity.”

According to Chipman, the faculty director of the group, a cappella is more jazz- and popular-oriented than chamber singing. In a cappella, performers use a different, ecstatic kind of music, including choreography and special lighting effects.

The SugarTown a cappella group is preparing to play a bigger role on campus than earlier a cappella groups. The members want to take part of the community, Chipman said.

According to Chipman, the music department thought making a faculty-led group instead of a student-led group might help continue the longevity of it.

“I hope to harness some of the resources of the college and hopefully make this group a part of the community,” he said. “And not only the campus community, but also the Sugar House community. That’s why we decided to name it SugarTown.”

President Steve Morgan said he loves this music and is very excited about it. He said he wants the group to have a presence on campus and the community and for it to sing at events, fundraisers and competitions.

The 12 finalists jump in excitement of being the new faces of the SugarTown acapella group. They have now started their journey of creating a showcase that they will be performing in November.

“We would love to go to some of the national and regional competitions and win,” said Chipman, the faculty director of SugarTown.

SugarTown is currently working on pieces including “Wake Me Up” by Avicii, “The Origin of Love” by Mika, along with a mashup of a couple of Maroon 5 songs. The team is working on doing an arrangement with the song “Sugar,” which might become their theme song.

Chipman tells students and the community to keep their eyes and ears open, because they will be hearing a lot from SugarTown in the coming weeks.