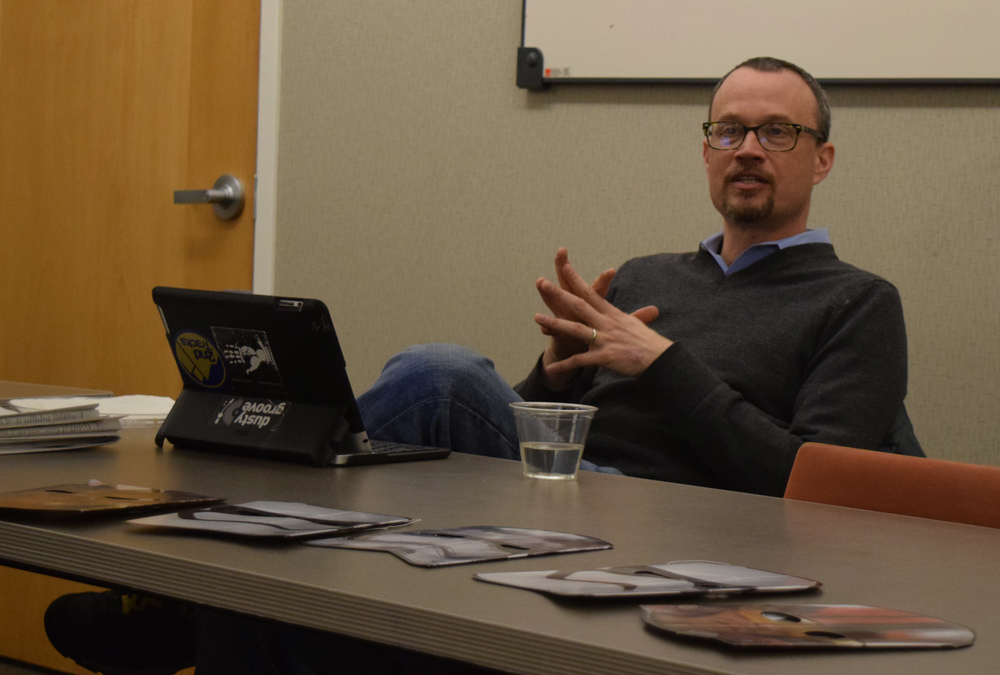 Rabbi Levinsky from Park City discussed the parallels between Star Wars and Judaism at the first Hillel Food For Thought Series. The round-table discussion ended with dialogue between students and diving deeper into the Star Wars movie and the shared hate of the third film. Photos by Rachel Robertson

What do Judaism and Star Wars have in common, and what’s the Force really about? Rabbi David Levinsky from Park City held a discussion on the parallels between the major motion picture and faith as part of the Hillel Food For Thought Series.

Dana Tumpowsky, executive director of Hillel of Utah, put together a new event this year called the Food For Thought Series at Westminster College.

“I knew I wanted to expand and bring some more Jewish value and teachings to [the Food For Thought Series],” Tumpowsky said.

Tumpowsky said she wanted the series to be experienced by all, so the event was open to Hillel members, those of Jewish faith and everyone else, as well.

The first topic was Star Wars, Jews and Jedis, which opened up parallels to the faith, the Force and the movie as a whole and even concluded with light-sabers and masks.

Rabbi Levinsky opened his discussion by talking about his love of Star Wars and when he first made the connection that the movie itself was like a religion.

“It really made me realize that there were some parallels to some degree with Star Wars and religion,” Levinsky said. “In the sense that it is, because I am a 48-year-old man, it’s literally something that I grew up with… It’s also parallel in a sense that any good story or building you can use to develop who you are. That’s really what the bible stories in Genesis are about.”

Levinsky said it’s true of any good story that people can use it to develop who they are and interpret and internalize. He also discussed the importance of Star Wars as “a shared discourse that you can interact with” and addressed the functionality of the story at the same as a Jewish religious text.

Levinsky also addressed the Force as the most apparent connection to religion. That the “Force will help us” is extremely similar to the theology of believing in God and God helping, Levinsky said. One scene that the Rabbi highlighted was when Finn and Han Solo are rescuing Rey and fighting the Shields.

“Finn turns to Han Solo and says, ‘The Force will help us. Everything will be okay,’” Levinsky said. “And Han responds, ‘That’s not how the Force works.’”

Students and faculty participate in Hillel Utah’s first Food For Thought Series Star Wars, Jews and Jedis. The series made connections between the movie series phenomenon Star Wars and faith of Judaism.

Levinsky said that moment in the movie works just like religion does.

“Han Solo is pointing out the Force doesn’t just save people or help people,” Levinsky said. “People reveal the power of the Force. The key to the Force is human action. Solo is creating a nuisance theology, saying humans can’t be passive in their relationship to divinity. Rather, it’s our activity that reveals divinity… and this is very similar in Rabbinic Judaism.”

The round-table discussion opened up issues of faith and believing in God versus action and service.

“Faith alone doesn’t get you anywhere,” Levinsky said. “We’re like, ‘Oh yeah, I believe’ but so what? You got to do stuff.”

He addressed the importance of the path and the actions and participating in the commandments.

The round-table discussion ended with dialogue between students and diving deeper into the Star Wars movie and the shared hate of the third film. The talk also addressed the issue of racist threads throughout the movie series and the nature versus nurture and whom received access to the Force.

Tumpowsky, Hillel Utah executive director, said she is excited for the series as a whole. The topics up next include Jews and tattoos, what it means to be Jewish and then thirdly, how to be a Mensch.

Students, staff, faculty and the Westminster community are welcome to attend and participate in the Food For Thought Series. The next series will be happening in mid-February.