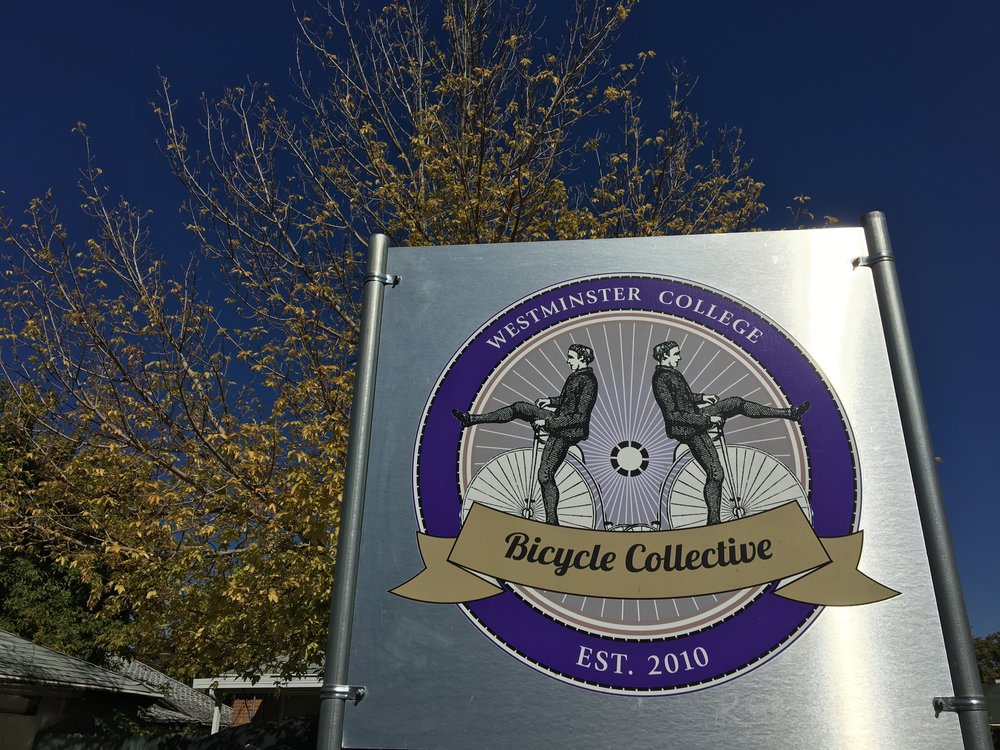 Westminster’s Bicycle Collective will host free bike repair classes every week on Mondays and Wednesdays at 2 p.m. Students, alumni, faculty and staff can learn everything taught in the classes at any time, according to Kyle Knutson, a graduate student and manager of the Bicycle Collective. Photo by Rachel Terran.

What used to be a pop-up tent in the Richer Commons has transformed into an official bike shop where no one leaves without getting down to the nitty gritty work of bike repair. This year, Westminster College’s Bicycle Collective is hosting official bike repair workshops every Monday and Wednesday at 2 p.m.

At the Bicycle Collective—located on the north end of campus on 1780 S 1200 East—bike lovers have access to skillful student workers, tools, parts and equipment. It’s a free “do-it-yourself’ facility for students, faculty and staff.

Logan Gill, a junior business management major from Minnesota, has worked at the Bicycle Collective since his first year at Westminster. This year, Gill is the lead bike technician on campus.

According to Gill, student bike technicians have plenty of tools and knowledge to help students fix their bikes and keep everything in riding shape. At the Bicycle Collective’s free workshops this year, the campus community can learn skills such as braking, shifting and how to change a tire.

Kyle Knutson, a graduate student and manager of the Bicycle Collective, said the shop is not a place where customers simply drop off their bikes—nobody leaves without learning something.

“At a bike shop, you just take your bike and drop it off,” Knutson said. “Here, it is experiential and hands on.”

The Bicycle Collective won’t do the work for its customers but will facilitate the process, Knutson said.

“Everyone has to watch and learn and do for themselves,” Knutson said. “You’ll leave here knowing how to fix your bike—that is the goal, anyway.”

Logan Gill, the lead bike technician on campus, makes adjustments on a rental bike at the Bicycle Collective’s shop, located on the north end of campus at 1780 S 1200 East. Students who take their bikes to the collective never leave without learning the skills for themselves, according to Gill. Photo by Rachel Terran.

According to Knutson, students, alumni, faculty and staff can learn everything taught in the classes at any time. In addition, the Bicycle Collective offers free 48-hour bike rentals.

“We set you up with a lock, bike and helmet,” Knutson said. “We have had a fair amount of rental bike use this year.”

Monica Ferreira, the assistant director of Westminster’s Environmental Center, said working at the Bicycle Collective is a popular position on campus. However, she said student employees need to have the proper experience and passion for biking.

“We have had techs that have worked at bicycle shops before, but the biggest thing is that they are passionate about cycling bottom line,” Ferreira said. “That has always been the common ground.”

Jack Graham, a junior at Westminster and a technician at the bike shop, said he is currently working on projects to spread awareness about bike commuting and biking on campus.

“I have worked at other bike shops, and the bike collective is definitely the most involved,” Graham said. “We are really here just to help the biking community at Westminster.”

Graham said the Bicycle Collective is also more affordable than other bike shops in the area.