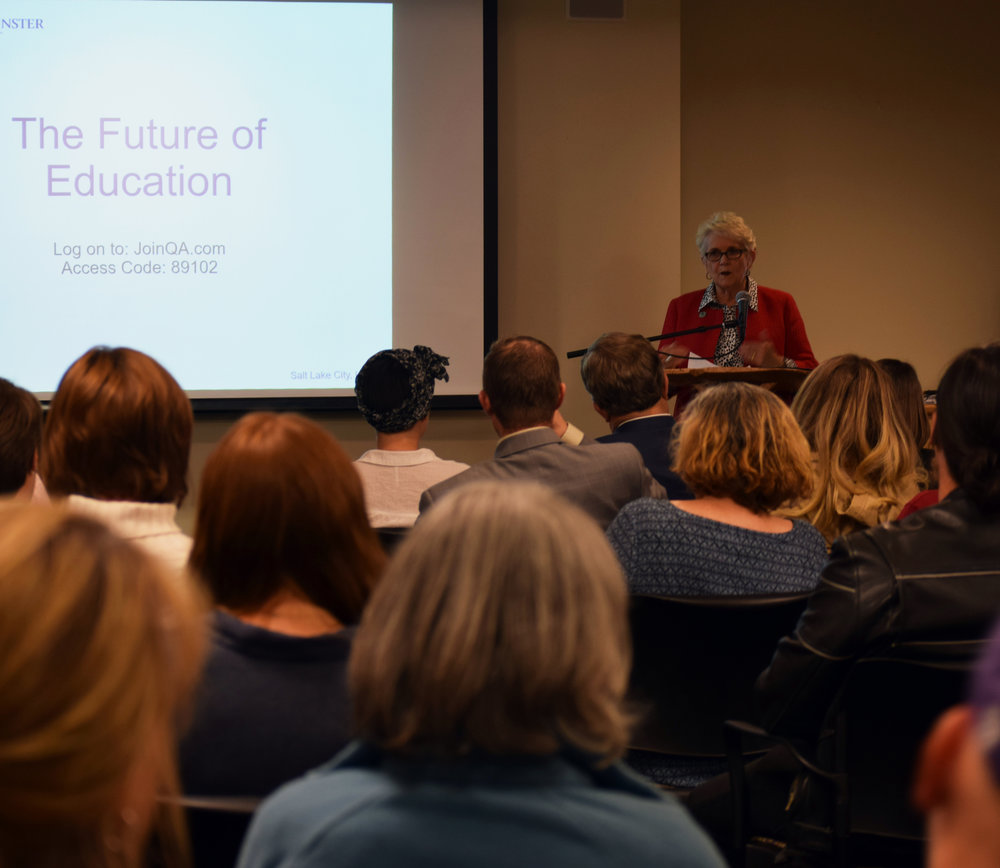 Utah Rep. Carol Spackman Moss speaks to a crowd of 60 in the Kim T. Adamson Alumni House on Oct. 10th. Westminster alumni invited Moss to speak about the Academic Pathway to Teaching and how it will affect individuals. Photo by Chloie Dale.

The Utah State Board of Education passed the Academic Pathway to Teaching (APT) policy in June 2015—an alternative teaching route that has evoked a variety of emotions.

The APT allows individuals holding a bachelor’s degree the opportunity to take a content and knowledge-based test. If they pass, they receive their certification to teach elementary and secondary grade school in Utah.

The policy was brought to the Utah Board of Education when superintendents in rural Utah cities could not find teachers to fill their classrooms, according to Mark Petersen, the public relations director for the Utah State Board of Education. The state needed an easier solution to boost teacher enrollment, so the APT was born.

Some educators say this policy discredits them because it allows individuals to bypass teacher and classroom preparation. Dr. Melanie Agnew, the dean of Westminster’s School of Education, said she is uneasy about the new policy.

“In August of 2016, a study conducted by legislators from across the U.S. found that 10 of the highest performing education systems in the world have raised their standards for the preparation, status and compensation of teachers,” Agnew said. “However, national trends in the U.S. are going in the opposite direction, lowering requirements for becoming an educator.  This trend is consistent with other reform policies that have exacerbated issues of access, equity and quality in public school systems for more than 30 years.”

Petersen said the policy is not meant to discredit teachers but to help district and charter schools fill niche positions. He said it’s sometimes easier to hire an expert in a particular field rather than search for a teacher to fill the position.

“In rural Box Elder County, there are plenty of engineers at ATK Thiokol who know math and might be able to spend some time in the schools, but finding a part time high school math teacher may be more difficult,” Petersen said.

Some current education students at Westminster are also wary of the policy.

“The APT, despite my disdain for it, will not—indeed, cannot—deter me from my career as an educator,” Jones said. “I feel that the public does not understand just how difficult the teaching profession is.”

Kathleen Tarmina is currently enrolled in Westminster’s Master of Arts in Teaching program and will graduate in 2018. Although she’s had classroom experience, she said she still feels like it isn’t enough.

“I have worked in the classroom, but I don’t feel like I have enough knowledge to be the lead teacher,” Tarmina said. “I feel it’s important to get the proper background. I was approached to start teaching but wanted to go through this program because otherwise I’d feel like an imposter. I don’t think people realize how educated teachers are and how devoted they are to educating children.”

On Oct. 10, Westminster alumni hosted Utah Rep. Carol Spackman Moss to speak about the new policy and its potential outcomes. Before Moss became a representative in 2000, she spent 33 years as a teacher at Olympus High School in Holladay.

Moss said she opposes the APT and fears the people making the laws don’t know how the education system actually works.

“The people talking about education are not of the [education] mainstream,” she said.

Moss ended her discussion by taking questions from the audience. One audience member asked her what people could do to convey their dislike for the policy.

Jones held onto this idea as he left the talk.

“I think I’m going to write my legislator,” he said. “We know it is an option, but it is just a matter of taking the time to do that, and that is something I want to commit to do.”

A lot of emotions have surrounded the APT, but one is evident among all in the education community—passion. Passion to become educators and fight against policies they feel will hurt more people than just themselves.

“In the School of Education, we mentor students as they gain knowledge and develop the skills to become effective educators in the classrooms of today,” Agnew said. “The learning curve of becoming a teacher is steep and rigorous. Without this caliber of preparation, faculty in the School of Education feel strongly that children, the teaching profession and ultimately society are placed at risk.”

Petersen said he recognizes this risk but wants to assure educators, districts and charter schools that the APT is not a mandatory policy.

“I understand the hard work and expertise that go into both learning and growing in the profession,” Petersen said. “The APT is aimed more to individual positions: financial literacy, career and technical education positions (e.g., computer coding, accounting, etc.) and some of the more difficult to place math and science teaching positions in rural Utah. It is also entirely a matter of choice for districts and charter schools. If a district or charter does not wish to hire an APT teacher, they are not obliged to.”