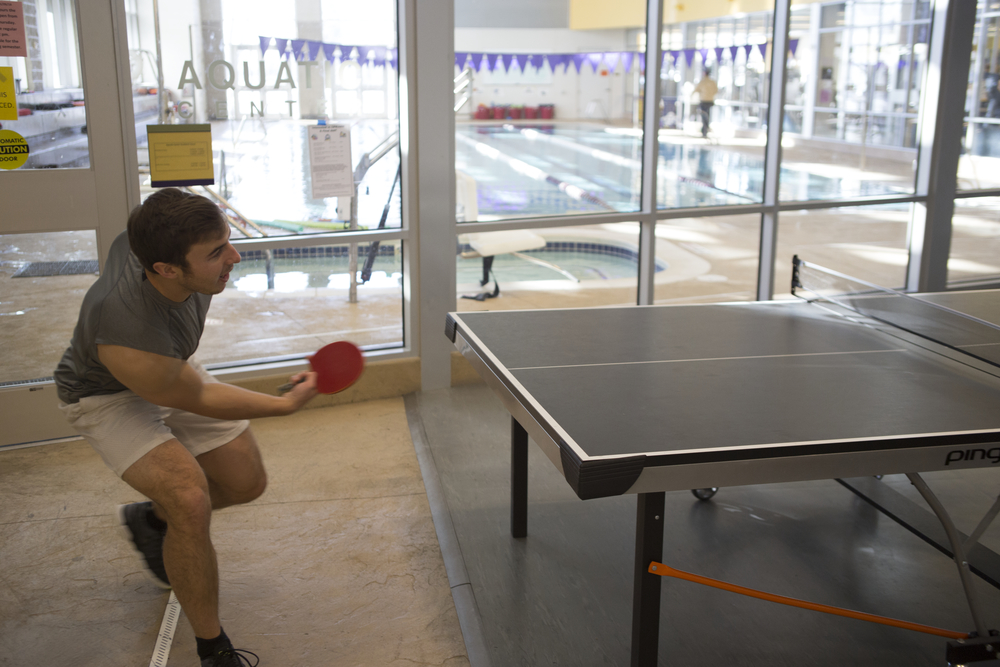 Peter Seppi makes a save while playing pingpong in HWAC. Seppi said he started playing pingpong at Westminster as a way to get involved on campus and to meet new people. Photos by Mika Pinner

Pickleball is one of America’s fastest-growing sports, according to the USA Pickleball Association. However, most people on campus don’t know the ins and outs of the game.

Laura Iverson-Bastiani, the college’s assistant director of health, wellness and recreation, introduced the sport to Westminster in the fall of 2015 . Iverson-Bastiani organizes all intramural sports on campus, including pickleball.

Because the program is almost brand new, it’s not yet at the level of popularity compared to other schools at the national conferences Iverson-Bastiani attends.

“Pickleball is probably one of their most popular sports,” she said. “It is hard to get a sport like pickleball started because it sounds weird and if people haven’t heard of it, it’s like ‘What is that?’”

Iverson-Bastiani wasn’t wrong when she said the word sounds weird to others.

“I have no idea what pickleball is, but it sounds dangerous.” said Marni Harbrecht, a junior communication major.

Pickleball is anything but dangerous, since many people play well into their elderly years according to Iverson-Bastiani.

Though the word may be confusing, the rules of the game are simple, according to Iverson-Bastiani.

“It is a combination of tennis, badminton and table tennis,” said Traci Siriprathane, Westminster’s director of fitness, wellness and recreation. She plays in the school’s pickleball tournaments with other staff and students.

The equipment for the game includes a paddle larger than a table tennis paddle and whiffle ball. The game is played on a court slightly smaller than a tennis court and can be played indoors and outdoors. Westminster holds all its pickleball events in Payne Gymnasium.

Westminster’s competitions are played in doubles, but “you can play single or doubles just like in tennis,” Siriprathane said.

Saeed Rezai, Westminster’s director of campus safety, swings to score at a pickleball themed retirement party last spring. Pickleball games will be held Nov. 4, Nov. 11, and Nov. 18 from 1 to 3 p.m. in Payne Gymnasium.

Because this is a new sport, Iverson-Bastiani said she has done a lot of advertising to get students involved. There are flyers at the front desk of the Health, Wellness and Athletic Center and all information is online at westminstercollege.edu/intramurals.

Iverson-Bastiani has organized a learn to play day on Friday, Nov. 4 at noon, where students and staff can show up to learn the basics.

“It definitely takes practice, but anyone can play and all levels can play,” Siriprathane said.

For anyone who wants to play, the registration deadline is Nov. 1. and games will be held Nov. 4, Nov. 11, and Nov. 18 from 1 to 3 p.m. in Payne Gymnasium. Westminster will provide all gear needed to play.