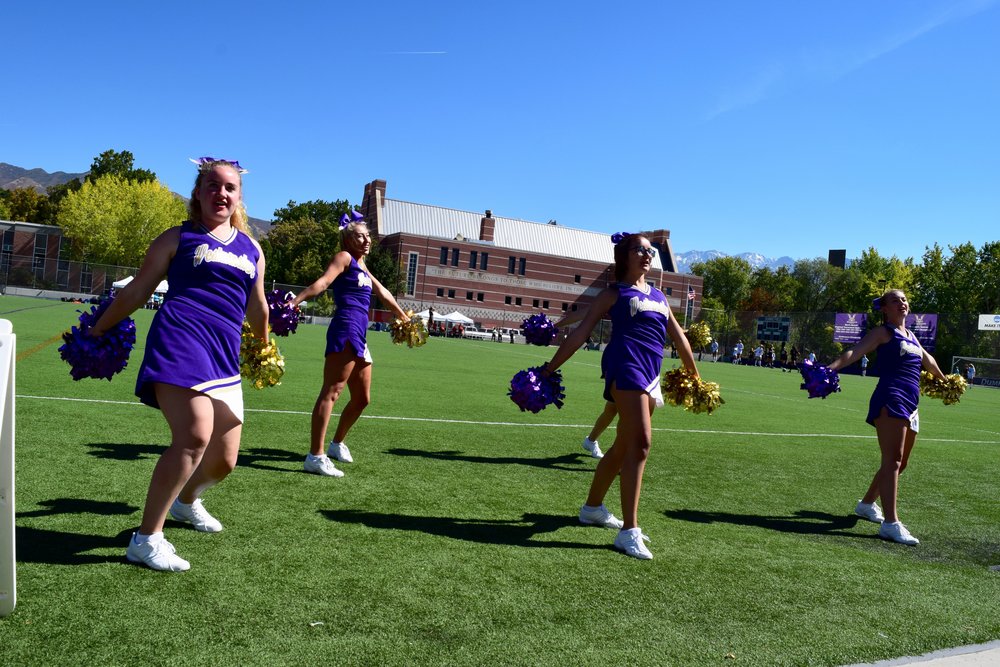 Westminster’s cheerleading team performs for the crowd during a soccer match at Dumke Field on Sept. 25. “Cheerleaders enjoy the leadership and spotlight, and the dancers tend to appreciate the art of telling the story with only their body, not their voices,” according to Nicole Vogel, the head coach of Westminster’s spirit team. Photo by Scott Salter.

The sight of sparkling pom-poms is becoming commonplace at Westminster College’s athletic events. Starting its third year, Westminster’s Spirit Team has split into two divisions, with one division focused on dancing and the other on cheerleading.

The split was made to ensure that each team was able to specialize in their art form, according to Nicole Vogel, the head coach of Westminster’s spirit team.

“In our first two years, the team was responsible for sideline cheers, some stunts, halftime performances and all that goes with it,” Vogel said. “With the new format and the split teams, I can work on stunts, tumbling and cheers with one team and the halftime numbers and dance technique with the other all at the same time.”

First-year cheerleader Kiernan Jett said the split has been successful so far, allowing the members of the spirit team to focus on different skills.

“With cheer you have to be more sharp,” Jett said. “Dance is more flowy and has a different style overall. We do group numbers together, but there are times where dance and cheer can show off their skills in different areas. We’ll do a show and tell after practices to show each other what we’ve been working and basically participate in the other area of expertise.”

Westminster’s cheerleading team leads cheers during a soccer match at Dumke Field on Sept. 25. “We want the crowd to get used to the idea of cheering the team on,” said Hanna Lukes, a Westminster student cheerleader in the graduate program. Photo by Scott Salter.

Vogel said she’s optimistic about the benefits the split will have for the members of the spirit team and the audience and has already seen a difference from previous years.

“The majority of the team preferred to dance and were not comfortable yelling at the crowd,” Vogel said. “It really seems there are two personality types involved with the spirit team. Cheerleaders enjoy the leadership and spotlight, and the dancers tend to appreciate the art of telling the story with only their body, not their voices.”

School spirit is something Westminster’s athletic events often lack because of the small school size, according to Hannah Lukes, a Westminster cheerleader and graduate student. Lukes said the cheerleaders’ enthusiasm and chants are meant to help get the crowd warmed up and excited.