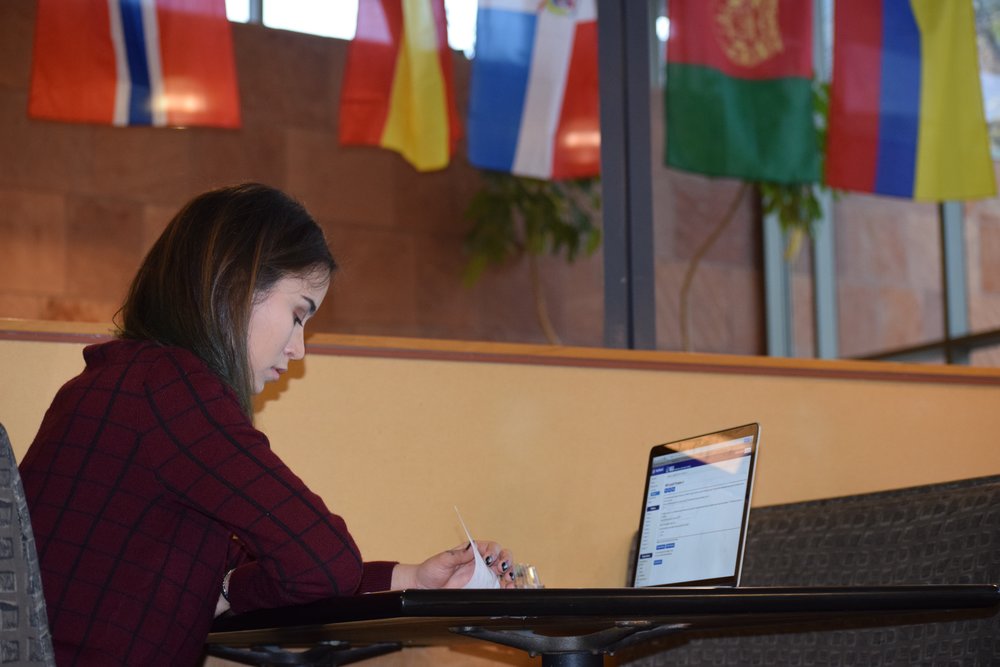 Luisa Rusta, a pre-med student majoring in biology, does homework in the Shaw Student Center. Rusta has spent Thanksgiving in the U.S. twice, and celebrated the holiday with her roommate’s family during her first year at Westminster. Photo by Kennedy Mason.

As the majority of Westminster College students head home for Thanksgiving to spend time with their families, the break has the college’s 120 international students wondering how they’ll be spending their time, since the four day weekend isn’t enough time travel home.

Westminster’s International Center tries to match international students with families in the area so they have somewhere to go for the break, according to Sara Demko, Westminster’s assistant provost for global learning.

“We wouldn’t want anyone to be alone on a holiday. We don’t have a formal program, but typically we send out an email to all international students and we ask them if they don’t have anywhere to go. Then we try to match them up with the family usually of a Westminster faculty or staff person.”

Demko said the college generally matches 10 to 15 international students with families for Thanksgiving each year.

“I’m sure it’s pretty lonely here on Thanksgiving,” Demko said. “It’s also not their holiday, but they’re coming to the U.S.—they want to experience our holidays and traditions here.”

Luisa Rusta, a pre-med student majoring in biology from Berlin, Germany, has spent Thanksgiving in the U.S. twice. During her first year at Westminster, she spent the holiday with her roommate’s family.

“I was lucky to participate in the celebration,” Rusta said. “Everyone had a chance to talk about what they were thankful for, which was a great way of acknowledging how many good things happen to you.”

“They made sure I had every single thing on the table, [including] turkey, lemon and apple pie, rosemary buns and others,” she said.

Though Rusta said she doesn’t know what she’s doing this year for Thanksgiving, she said she won’t spend it by herself, thanks to her friends.

Though some international students embrace the Thanksgiving tradition, others use the break as free time to explore Utah.

Diwas Poudel, a first-year computer science major from Nepal, said he hasn’t been in the U.S. long enough to experience long breaks like Thanksgiving but said he tries to be a tourist when he’s free.

“I usually roam around the city, visit parks and sightsee,” Poudel said.

Poudel said he wants to spend time with his family over the break like other students do but won’t be able to since his flight home is 30 hours. Poudel said he may join a friend for the holiday—though he hasn’t been so lucky over past breaks.

“I try to keep myself occupied with something so that I don’t have to be sad or in my bed all the time,” he said.

Demko said any students—international or otherwise—who don’t have a place to go for Thanksgiving can come to Westminster’s International Center to be matched with a family for the holiday.

“Our faculty and staff are really generous,” Demko said. “If any of them knew that someone was alone, they would open up their home and have the student come over.”