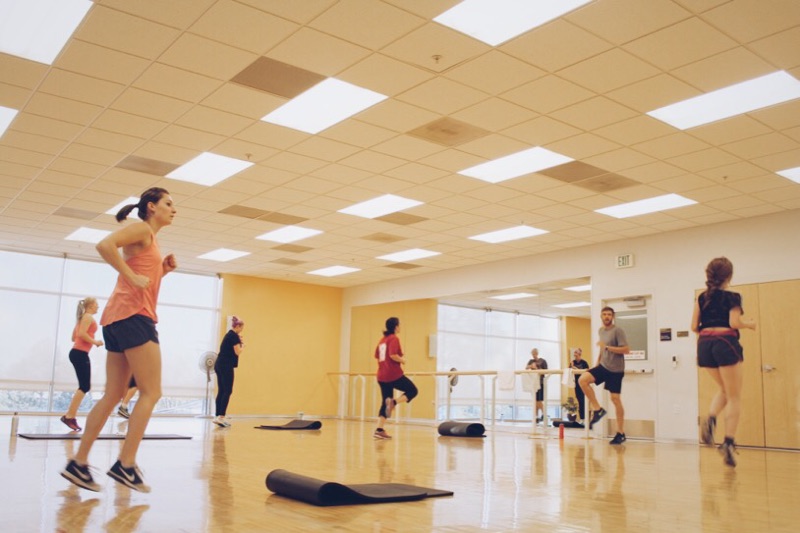 Students in the Insanity group fitness class work out in the Health, Wellness and Athletic Center (HWAC). “[Skisanity] will be just like Insanity,” Killpack said in an email. “It will be a full body workout––arms, core, back, lots of cardio and, of course, legs.” Photo by Hasib Hussainzada.

For some Westminster College students, off-season traveling, partying and drinking are over––it’s time to get slope ready.

“Skiers and snowboarders go crazy in the fall,” said Cole Schreiber, a junior from Falmouth, Maine. “Every skier or snowboarder goes insane [when] it is not snowing. So they are drinking more than they should and don’t work out. Then, ski season rolls around [and] everybody is ill-prepared for it.”

As winter approaches, experts are preparing for snow sport related accidents, including serious injuries that could require an individual to be on crutches or in a cast for several months.

Each winter season, there’s an average of 49 serious incidents––paralysis, head trauma and other life altering injuries––according to National Ski Areas Association (NSAA). While equipment provides protection, winter sports enthusiasts should also practice pre-season training to prepare for the physical demands of the sports, according to the United States Ski and Snowboard Association.

To help athletes recover after injury and lower their chances of getting hurt during the upcoming ski and snowboarding season, Westminster College’s Health, Wellness and Athletic center (HWAC) is offering Skisanity––a six week conditioning class for skiers, snowboarders and those who don’t hit the slopes.

“I thought [Skisanity] would bring out the skiers and snowboarders to get them excited about the upcoming ski and snowboarding season,” Ferne said. “[In addition], this would be a fun way to bring more people into the Eccles HWAC and have fun and get in shape for the heading down the mountain.”

Tagg Francis, a Westminster senior studying environmental science, said classes like Skisanity are an important way for students to get back in shape after the off season.

“Everything is good in moderation,” Francis said. “You can’t drink the entire off season and expect to come back killing it. You have to put some work in at the gym in addition to having fun.”

Schreiber, a junior from Falmouth, Maine, is a retired professional snowboarder who now participates in the sport recreationally. During his 12 years of professionally competing, Schreiber broke multiple bones in his body. He said classes like Skisanity may help reduce injuries for people who struggle to go to the gym alone and stay motivated.

Schreiber said everyone gets hurt on the slopes, but what’s important is how a person recovers from those sustained injuries. After he broke his back, Schreiber said he was freaked out but also excited to get back on the snow.

“[Ski and snowboarding] is high risk, low reward,” he said.