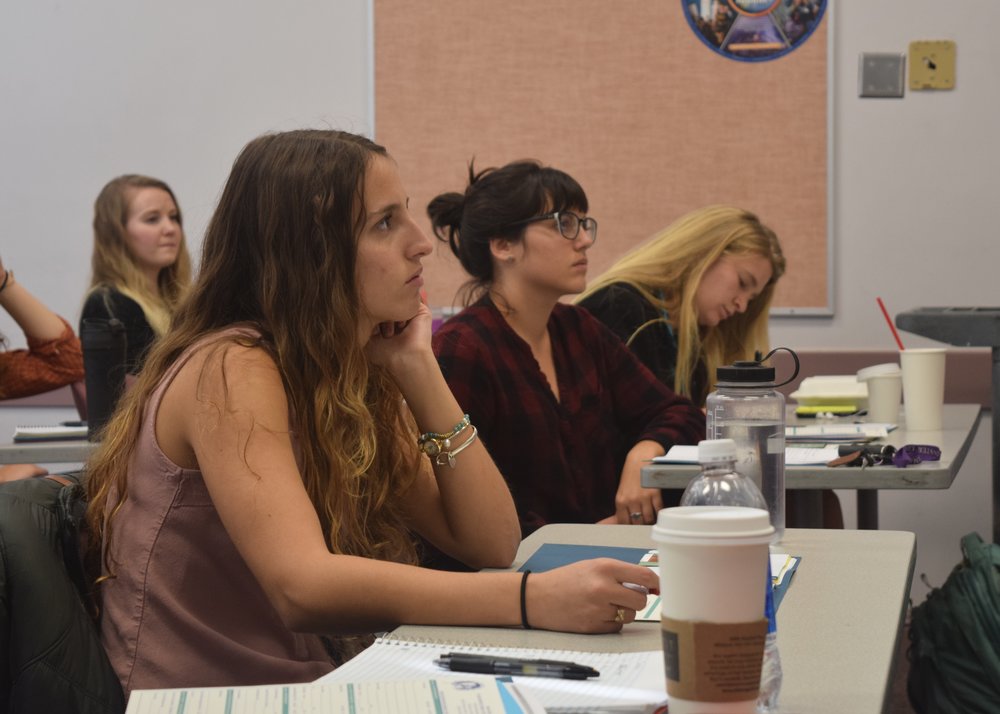 On Westminster College’s campus, there are two confidential resources for student survivors of sexual assault—the Counseling Center and Student Health Services. All other Westminster faculty and staff, as well as RAs, are responsible mandatory reporters.

“My goal with it is that there will be more people on campus who have this training and are able to understand how to respond to people who have gone through some sort of sexual violence—whether that be sexual assault or harassment,” said Sabi Lowder, president of Westminster’s Feminist Club.

Student activists have called for the creation of a victim advocate position on campus—a full time staff member who would act as an additional confidential resource for survivors of sexual assault. Although most colleges in the state have a victim advocate, Westminster does not.

“We started thinking about well, ‘What would a victim advocate on campus look like?’” he said. “We’re currently still exploring that because now I think we understand more what the students are wanting and trying to line those up.”

“We really feel like advocacy is necessary on campus, but the school is not really doing it,” Lowder said. “I just don’t think administration can fully grasp or is fully grasping that so many of their students are going to experience this and that it is their job to make them feel safe on campus.”

Although the peer advocacy program will be beneficial on campus, Tiffany Perry, senior political science major, said there is still a need for a victim advocate.

“Having a peer network is a great start, and I can’t commend Sabi enough for the work she had put into getting this going,” Perry said. “However, there are significant limitations to having a volunteer-based program. Because the volunteers will be students, their classes will be their number one priority, and rightly so. Therefore, there is a desperate need for students to have someone that can put them first.”

One in three women will experience some form of sexual violence in her lifetime, according to statistics from the Utah Department of Health. With the prevalence of sexual assault on college campuses, the more non-mandatory reporting resources available the better, said Gregory Elder, a senior sociology major who is participating in the 40-hour training.

“[Student Health Services and the Counseling Center] are great resources for people to have, but they can only do so much,” Elder said. “There are only so many staff members there and they only have so much time available. They can only handle so many cases.”

Lowder was sexually assaulted the summer before she came to Westminster and said having resources who are non-mandatory reporters is vital for survivors, who often need time to process before deciding whether they want to report their sexual assault and go through the trauma of an investigation.

“Not to speak on behalf of all survivors, but from people I know, that’s a common feeling that you don’t immediately want to talk to somebody who’s going to report it,” Lowder said. “You don’t want to be in a situation where somebody is like, ‘Let’s go to the Title IX office and let’s get this investigated.’ [Sexual assault] is super underreported and hopefully that goes up. People feeling empowered to report is really important, but a survivor should never be pushed, I feel, to report if they don’t feel like they’re there yet emotionally.”

When there aren’t enough trained confidential resources, Lowder said survivors often turn to their friends, who aren’t always equipped to deal with the conversation.

“It’s hard to talk about rape with your friends,” Lowder said. “It’s hard to feel like you’re not being heavy and like you’re putting too much on them or like they’ll understand. Because a lot of times, other 18 year olds don’t know how to immediately respond to someone telling them that they’ve been raped. And that’s a big thing that I saw with my friends.”

“I think it’s just that idea of trying to shift the culture that 18 year olds can know how to respond and can at least have some sort of knowledge on how to be there for someone when they’re telling them about rape,” Lowder said.

Sara D’Agostino, a sophomore finance major participating in the Sexual Assault Peer Support Network training, said student advocates will be available to survivors through every step of the process. However, she agreed it’s vital for students on campus to learn how to appropriately respond to survivors from day one, which is one of the skills she said she’s picked up from the training so far.

“Having people that have been trained on how to react specifically when they disclose information to you is really important,” she said. “Everyone wants to help, but sometimes it’s really easy to say the wrong thing.”

The Feminist Club received a SLICE (Student Leaders in Civic Engagement) grant through the Dumke Center for Civic Engagement to offer the Utah Coalition Against Sexual Assault (UCASA) training to students at a discounted price.

Students who committed $20 and 40 hours to the training said they see their role as advocates as a way to help the community and combat rape culture. Elder, senior sociology major, said it’s important for men to join the cause, as well.

A group of around 10 students will complete the training on Nov. 18, and the program will officially roll out in January 2017.

“It’s okay to turn to an advocate for help,” D’Agnostio said. “We’re afraid students may see us as affiliated with the college, which we’re not necessarily. We don’t have to report anything. I think it’s important for students to understand exactly what the role is and that we work with Westminster, not for Westminster.”

Lowder is a member of the Title IX student advisory committee and has two more years left at Westminster, during which time she said she plans to continue expanding the Sexual Assault Peer Support Network.