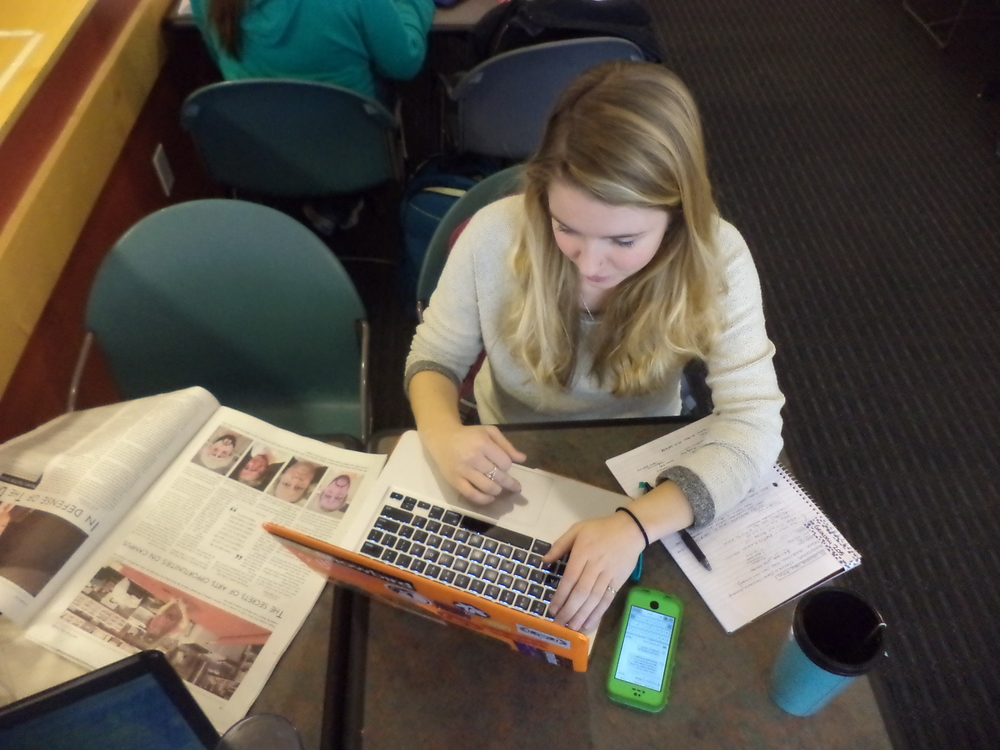 Hunter Reed, a junior environmental chemistry major works on homework while talking to her boss on the phone in the Shaw Student Center on Jan 28. One study shows that there is a change in brain structure between those who multitask frequently and those who do not. Photos by Alisa Scott

A student sits in the Bassis Student Center, reading, eating and listening to music loud enough for others to hear—one example of multitasking, a habit that may be negative for productivity and mental health, according to research from Stanford University, the University of London and the University of Sussex.

People who regularly interact with multiple forms of electronic information do not pay attention, recall information or switch between tasks as well as those who work on one task at a time, according to a Forbes article about the research.

“People who multitask all the time can’t filter out irrelevancy,” said Dr. Clifford Nass, a Stanford communication professor who worked on the research, in an interview with NPR. “They’re chronically distracted.”

The problem of distraction is worse with technology and media multitasking.

“Even though I’m a historian, I realize that you do not want to and you cannot stop the flow of technology,”  said Georgiana Donavin, an English professor at Westminster. “I think the best thing to do is to think with real intention about how best to use those technologies in order to learn and to write and to think.”

Nass, Stanford communication professor, said that students who participated in the study and considered themselves good multitaskers thought that they were more productive when they were working on multiple tasks, even though they were less productive and had difficulty focusing on a single task.

Although many students in Nass’s study considered themselves good multitaskers, several Westminster students said they weren’t proficient at accomplishing several tasks at once.

Paul Keeney, sophomore music and environmental studies major, said he doesn’t usually do more than two or three tasks at a time because he is “horrible” at multitasking. Other students expressed similar feelings about their multitasking skills.

A multitasker’s computer screen has multiple webpages and word documents open while in the Shaw Student Center. Researchers have found that multitasking, especially multitasking with media, is less productive that competing one task at a time.

“I have trouble doing different tasks at once,” said Mystery Post, sophomore English major. “If I get too distracted, one of the tasks will suffer.”

Even though some students said they couldn’t, most still multitask. Many said they try to do two or three tasks at once, and they tend to multitask with media involved.

“I’m on my tablet and talking to someone or doing homework and then surfing the Internet,” Post said.

For some of these students, using media can be distracting.

“I watch Netflix when I do homework,” said Sierra Baker, senior psychology major. “I get sidetracked and start watching the show, and then that gets you off task for like 20 minutes after that.”

“While I’m eating, I’m looking at my phone,” said Diana Tran, junior nursing major. Tran said she is a good at multitasking and attempts to do around four or five tasks at once. “At work, I’m a health tech,” she said. “You’re talking to the patient, grabbing their temp, blood pressure, respirations and all that.”

Other students expressed a similar need for multitasking in their lives.

“I probably need to get better at multitasking because I have a busy schedule,” said Post, sophomore English major.

Some people in the Westminster community said they value focusing on one task at a time.

“I would encourage people to think about how they can focus in life because that aids deep thinking,” said Donavin, English professor.

Sierra Baker, senior, uses her phone before studying in the Shaw Student Center on Jan. 21. Baker said that her multitasking usually includes Netflix, TV or music.

People who multitasked during Nass’s study had lowered IQ scores, similar to what would be expected after staying up all night, according to a study by the University of London. The study showed that multitasking men’s IQs dropped around 15 points, equating their scores to that of an average 8-year-old child.

Other research shows changes in the brain structures between those who do and don’t multitask using media. People who frequently use multiple media devices simultaneously have a lower gray-matter density in the anterior cingulate cortex than those who use one media device occasionally, according to a news release from the University of Sussex. The anterior cingulate cortex is an area in the brain responsible for cognitive and emotional control.

“Media multitasking is becoming more prevalent in our lives today, and there is increasing concern about its impacts on our cognition and social-emotional well-being,” said Kep kee Loh, one of the neuroscientists who performed the study. “Our study was the first to reveal links between media multitasking and brain structure.”

Although this link is present, Kep kee Loh said there is no current research about whether multitasking causes changes in the structure of the brain or a lower amount of gray-matter gives someone a tendency to multitask.

There hasn’t been research done on whether the brain can be retrained to go from multitasking to working on one task at a time.There aren’t many people willing to participate in a study where they would have to give up multitasking, as it is so ingrained in their routines, said Stanford communication professor Dr. Nass in his interview with NPR. He said retraining the brain won’t happen right away, even if it is possible.

“Our brains are plastic, but they’re not elastic,” Nass said. “They don’t just snap back into shape.”