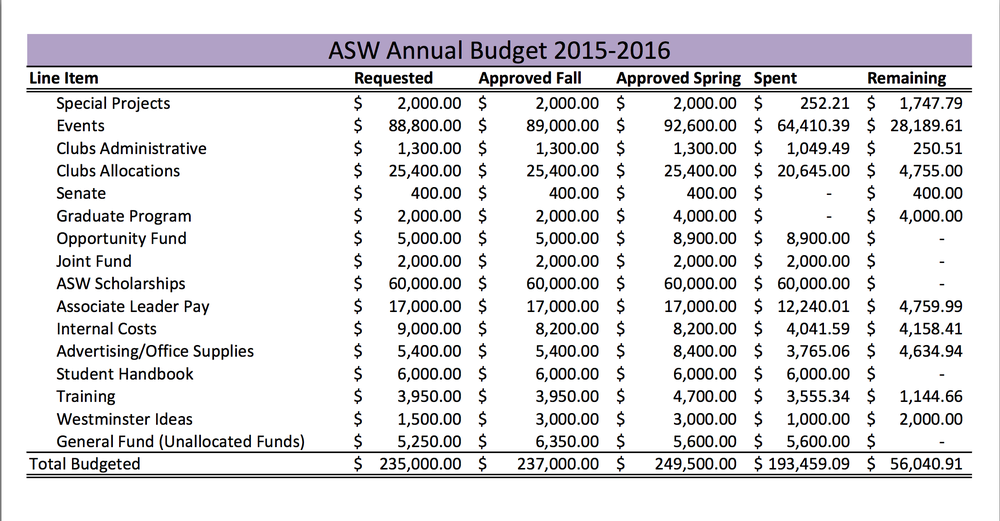 ASW’s Annual Budget is funded by student fees—yet most students are unaware of where their money goes.  ASW’s budget director, Hannah Williams, said students can have a big impact on where student government spends its money and that she is always open to hearing from the student body. Photo courtesy Hannah Williams

Although ASW drained its general fund and dipped into its emergency fund this year, student awareness of the $249,000 budget has remained nearly nonexistent.

“Student awareness about the budget is very low,” said Hannah Williams, ASW director of budgeting and accounting. “I think part of the problem is that student interest in the budget is very low. Not very many students or people in general really care about budgeting besides really nerdy accounting students. I think it’s important, though, that students know where their money is going.”

It truly is student money, since each full-time undergraduate student pays $54 in student fees, which funds the ASW budget—even though many students don’t realize it, Williams said.

“I had no idea there was a budget,” said Danika Kimball, public health major. “I didn’t even know what ASW was.”

The majority of ASW’s $249,000 budget is spent on events, with $92,600 budgeted for the Spring semester. Scholarships for ASW members make up the second largest line item with a total of $60,000.

ASW emptied its general fund at its Feb. 8 senate meeting for the first time in years, Williams said.

“We had like five different people all at once approach us and ask for money, and that was really unusual,” Williams said. “I don’t think we’ve ever had that many at once. The senate felt like all the requests were important and they wanted to accommodate everyone—but the only way to do that was to use up the general fund.”

ASW still has $60,000 in an emergency fund, so Williams said she is not concerned about going over budget, although ASW dipped into the emergency fund for its rebrand earlier this year. ASW is also planning on emptying more money from the emergency fund next year to spend on May Term scholarships.

“My goal as the director of budget and accounting is to maximize student fees and try to use that to make sure students have a really good experience,” Williams said. “There’s been a lot of research done, and we know the more involved students are on campus the happier they are in college and the more likely they are to graduate and stay in college. Student government plays a really big role in kind of fostering that community.”

Although student awareness of where their money goes is low, Williams said ASW is attempting to increase transparency about the budget through annual reports and by implementing surveys to gauge areas students feel money should be spent.

“We haven’t had a lot of students reach out and say that they are really concerned about the budget,” Williams said. “I get fairly excited about the budget. But even when I present it to senate—and those students are really involved in the first place—even their interest is pretty low, which is crazy to me because I think it’s so cool. I don’t know; that’s just kind of how it goes.”

Some students, however, said they were upset they didn’t know more about the budget.

“I’m kind of disappointed, I guess,” said Maggie Fischer, first-year accounting major, when she found out how much money ASW spends. “I feel like I don’t see that [money]. I don’t see where that goes. I don’t see what happens to it, and I don’t see it coming back to me.”

Williams said she hopes efforts to increase transparency will lead to increased interest and involvement from students about how and where Westminster’s student government spends its money—particularly as ASW gears up to begin working on its budget for the upcoming school year this April.

“Maybe it doesn’t seem like it, but students can really influence the budget,” Williams said. “I really want students to know that the ASW budget does come from student fees, so that means all students are a member of ASW, and they have a really big say in where the money goes—especially right now because they’ll be starting to make the budget for next year. This is the perfect time to jump in if you think we could spend money better.”