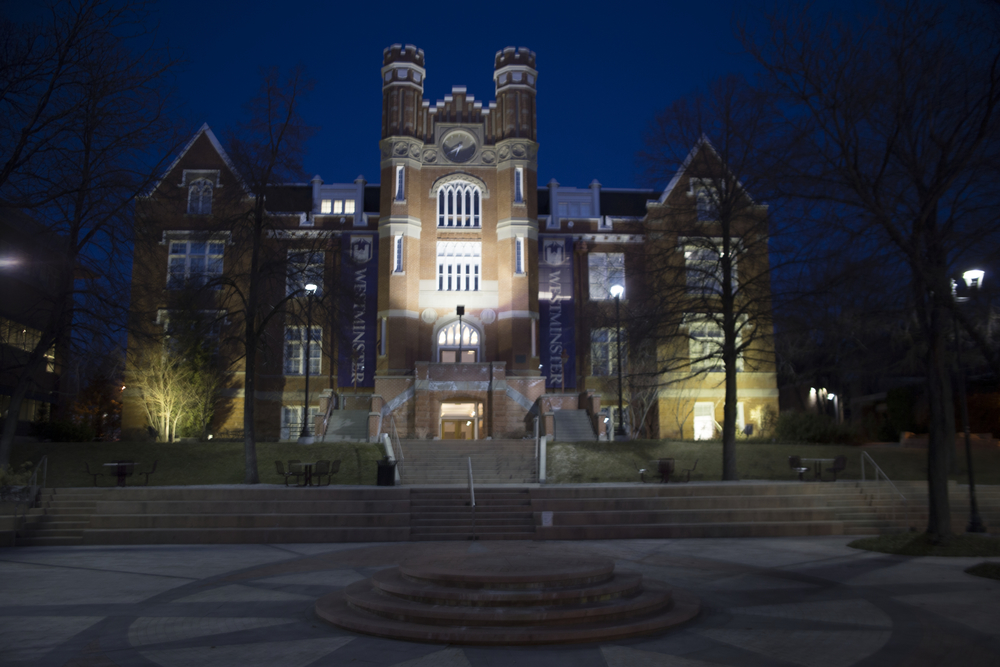 Converse Hall is lit up at night, providing light to the commons. “The visual of the safety light offers a big sense of safety,” said, Tallis Radwick, a senior sociology major who is part of the initiative to install blue lights around the college  to increase campus safety.

The Student Initiatives Committee is working to get emergency phones installed in more common areas of campus to make the college safer.

The blue light emergency phones are already on campus but can only be found in the parking garage below Dumke Field and the west side of Shaw. These phones offer a way to safety by having an always-lit LED light mounted atop a phone tower that people can use to call emergency personnel with a push of a button.

“Knowing someone is always ready to come help is a great comfort to have,” said Tallis Radwick, senior sociology major.

The Student Initiatives Committee addressed the importance of blue lights for safety on campus in a proposition to ASW senate members. They said they hope the idea of adding more emergency safety stations will reach President Steve Morgan for approval.

“The student population feels safety on campus is not complete without visual emergency services,” said the Student Initiatives Committee legislature. “For students to see such services provides comfort when they may feel unsafe, observe a potential safety hazard, request assistance or notice suspicious activity on campus.”

Some students said they see the blue lights as a comforting sign on campus.

“The visual of the safety light offers a big sense of safety,” said Radwick, senior sociology major.  “Knowing there is some place you can run or walk to and knowing someone will instantaneously answer you or that will send a patrol officer your way will make students feel a lot more comfortable.”

One of the three blue light emergency phones located in the parking structure beneath Dumke Field. The three BLEPT’s are located in each corner of the parking garage, except the north-west corner. Photo by Rachel Robertson

Rodney Glore, senior communication major and Student Initiatives Committee member, said he advocated for this cause because people were noticing the school doesn’t have emergency systems around common areas on campus apart from the parking structures.

“[The Student Initiatives Committee] represent the student population,” Glore said. “It’s our responsibility as student senators to support and bring such legislation to the college administrations when it is important to our student’s safety and security on campus.”

Some colleges have argued that cell phones have all but taken over the need for blue light emergency phones, but many schools are reluctant to completely do away with the phones.

Many colleges have made the transition to promoting phone apps for students to download. Of these schools, the University of Southern California (USC) has created its own app called Trojan Mobile Safety. On its app, students can report a crime, call for assistance and tell people where they are on with the safewalk feature.

The app is free to USC students and the school pays the licensing for the app.

Until Westminster gets its own blue light phones up and running, another alternative is a new app called BlueLight–Your Personal Safety Toolkit. This app turns cell phones into a personal blue light emergency phone.

“This is an app that uses GPS location to help you feel safer on the go,” according to bluelight.com “Let friends and family follow your trips, and ping them when you’ve arrived safely. Keep the app open while walking whenever you want help at your fingertips. In case of emergency, connect to the fastest help at your location.”

Radwick, Student Initiatives Committee member, said she sees both benefits and disadvantages with having a phone app versus having blue light phone emergency phones on campus.

“In some cases, it may be easier to go somewhere and push a button if your phone is not easily accessible,” Radwick said. “Often times, phones are grabbed and thrown so [the victim] can’t use it. The visual representation [of a blue light] may deter attackers.”

“It needs to happen immediately,” Radwick said. “With all the Title IX efforts in place right now, it’s actually a perfect time to get the plans revised and have [blue light phones] installed by Fall 2016. We should be taking every single precaution possible to ensure the safety of students at Westminster.”