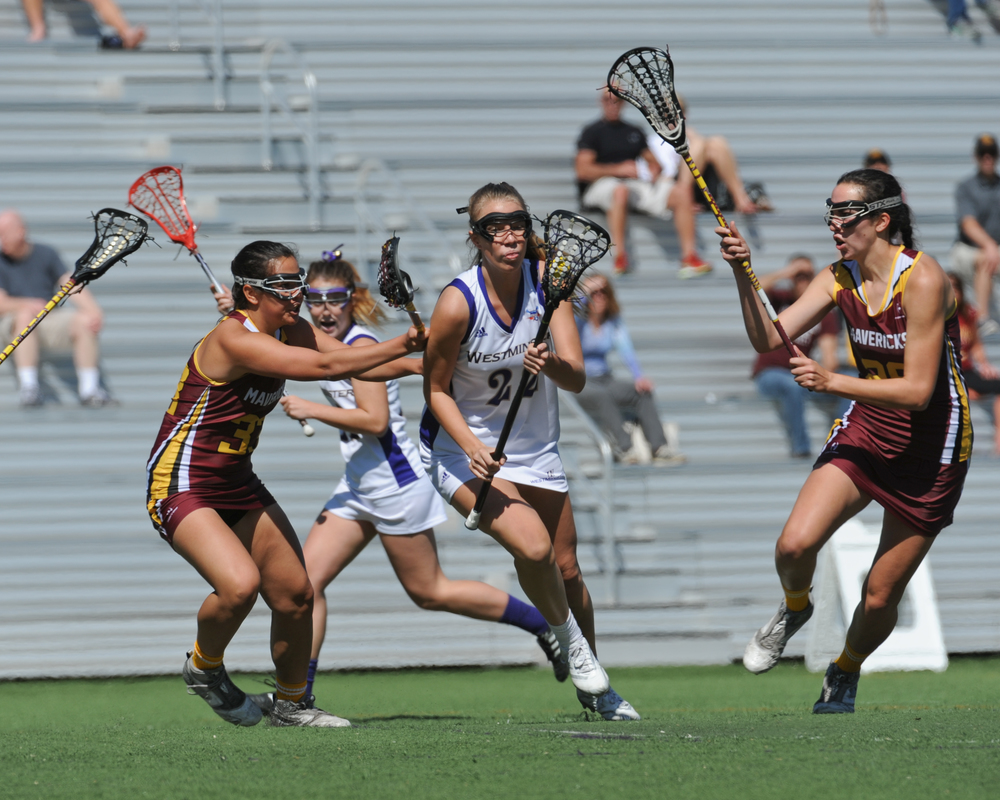 Kira Heiden (center) plays against Colorado Mesa University on Dumke Field. Heiden has been named RMAC Offensive Player of the Week twice this season and said she wants to go down in history as one of Westminster’s best female lacrosse players. Photos courtesy Bob McLellan, Shooting Star Photography

Westminster women’s lacrosse team is making sure to get on the radar in its first year of NCAA Division II play.

Westminster’s women’s lacrosse players were named Rocky Mountain Athletic Conference (RMAC) Players of the Week three times and have established a 1-1 conference record (1-2 overall) in just the first three weeks of the season.

Kira Heiden, junior marketing major who plays midfield, was named RMAC Offensive Player of the Week in the first and third weeks of gameplay.

“It’s nice to get some recognition, not just for me, but just for everyone on our team,” Heiden said. “We don’t always get the recognition I think we deserve. Everyone works so hard, and it’s just kind of nice to be like, ‘Look, someone’s getting recognized for all of our hard work.’”

This may be the first step to achieving Heiden’s lacrosse career goals.

Kira Heiden, junior marketing major who plays midfield on the women’s lacrosse team, plays on Dumke Field. The team has established a 1-1 conference record (1-2 overall) in just the first three weeks of the season.

“I want to go down in the Westminster history as one of their best players that has come to the school,” Heiden said. “They will rank you from top to bottom players, so I want to get up there, like the top, maybe the number one player, and just really go down in history.”

Niki Harding, women’s lacrosse head coach, said she was excited about Heiden being named the RMAC Offensive Player of the Week, as well.

“That was our first game in the NCAA, being a part of Division II and playing against another NCAA school, and our first game in the season that we are participating in the conference,” Harding said. “Kira’s been working really hard for that. We had talked about personal goals for her, and becoming player of the week wasn’t her personal goal, but she was able to meet the goals that we had talked about in the game and it helped her get the award, so that’s awesome.”

Heiden, two-time RMAC Offensive Player of the Week, said she has a good outlook for the rest of the season and the RMAC games.

Harding, women’s lacrosse head coach, said she feels that the team is prepared for the rest of the season.

“They’ve been working hard,” Harding said. “It’s mostly because of the effort of all of the players on the team. They all love it and they put forth a lot of effort, so they’re all getting better together.”

The work the team has done together has impacted the team members, as well.

“My long-term goal is to definitely be a thousand times better than I am at the start of every year,” said Claudie Jan, first-year arts administration major who plays defense. “I try to be positive, and I really want to work hard and just be the best I can.”

To get to the point where they are now, the team has been working and training in ways that will help them improve, said Head Coach Harding.

Harding said she thinks other players have the potential to be named player of the week this season, as well.

“Our team isn’t one of standouts,” Harding said. “Our team is more one that works together and plays as a team and because we do that we’re able to win games. I do think that we have other players that will be able to rise to the occasion.”