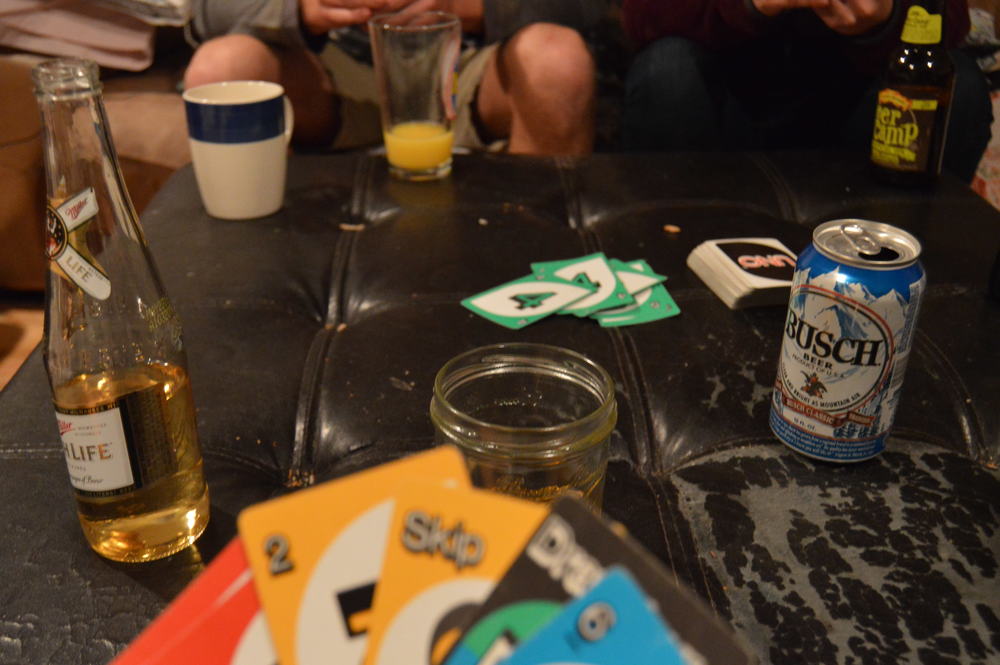 Westminster students play a game of Uno and drink alcoholic beverages at an off-campus get together. About 50 percent of alcohol-consuming college students binge drink, according to the National Institute on Alcohol Abuse and Alcoholism—drinking that is often normalized, making it difficult to tell if students are engaging in addictive drinking patterns. Photo by Rachel Robertson

This St. Patrick’s Day—one of the largest drinking days of the year—a half dozen students and community members came together in Dick 103, like they do every Thursday, and discussed their last alcoholic drinks and what motivates their sobriety.

Alcoholic Anonymous (AA) is just one resource available on Westminster’s campus for students whose alcoholic habits have become destructive or unmanageable—and on college campuses, these sorts of resources are particularly important.

About 50 percent of alcohol-consuming college students binge drink, according to the National Institute on Alcohol Abuse and Alcoholism. Although there are major health risks associated with binge drinking, some students may not see this as a problem.

“If we’re looking at a college campus, I think [binge drinking] causes a level of normalization,” said Jacob W., a student at Westminster who helped bring AA to campus a few years ago and agreed to speak to The Forum while upholding the program’s policy of anonymity.

“If [binge drinking is] to be expected as a college student, and the college students do it alcoholically, well, they’re still doing it as they’re expected, so they’re not stepping out of place,” Jacob said. “So, it doesn’t really offer a level of comparison for people of, ‘Am I exceeding what’s normal?’”

“Binge drinking is, I think, pretty regular no matter what campus it is, but Westminster takes a lot of pride in its lifestyle of drinking,” Forrest said. “They take that to be something to gloat over the other colleges in the state.”

This normalization could prevent students from realizing that their alcohol consumption has become abusive, according to the Counseling Center, which offers additional resources for students on campus.

The Alcoholics Anonymous program offers those struggling with addiction a 12-step process to sobriety, outlined in a book known to the community as “the big book.” Photo courtesy Jacob W.

The Counseling Center focuses on risk-reduction for drinking through education on alcohol poisoning, moderate drinking and the dangers of alcohol consumption on developing brains. Overall, Jones encouraged students to “be intentional about” their alcohol use.

“You’re going to be much better off, for the most part, in terms of your physical wellness drinking one drink every day than going out on Saturday night and drinking seven drinks,” Jones said. “That’s pretty obvious and certainly intuitive, but I don’t know that people realize it.”

In the college drinking culture, AA offers students who have struggled or are struggling with addiction a place where they can find support. AA lacks central leadership and helps members reach sobriety through a 12-step process outlined in a book known in the community as “the big book.”

Meetings at Westminster take place each Thursday night at 7:30 in Dick 103—though the room is subject to change each semester. The group at Westminster generally brings in 6-25 people, according to Jacob. The group is self-sustaining and gathers dues at each of its meetings to remain that way.

“The relationship we have with the school means they have stipulated no rent, but use the [dues] for big books and provide them with no cost, and we’re free to use the facilities as much as we like,” Forrest said.

Although the name implies it’s strictly a group for alcoholics, these AA meetings are open to anyone—including those who struggle with drug addiction or are unsure if they have a problem.

“You get this media portrayal of Alcoholics Anonymous being this group of crusty old men that hang out in a bowling alley in the restaurant section,” Forrest said. “What you see instead is basically a slice of any demographic you could possibly expect. You’ve got a large LGBT community, you’ve got young people, you’ve got people in their 30s and 50s and on up. Basically, the problem with alcohol isn’t limited to one sector of society. The fellowship then is this large community of people who have different experiences but can help you forward in trying to figure out how the solution works.”

This mentorship and community support is one of the reasons members of the program said it has been so successful in helping them reach sobriety.

“I honestly feel connected to individuals who genuinely care and will do what it takes if I need something,” Jacob said. “I can call somebody at any time of day, no matter what’s going on, and they will pick up, and they will be of service. It’s people who tell me they care about what’s going on and actually mean it. In AA, you feel safe. You feel at home. And that’s a very, very good feeling.”

Another aspect of the organization that has helped students successfully reach sobriety is the 12-step process the big book follows.

“The way the steps work is they’re not just saying, ‘Stop drinking,’” said Leah W., a Westminster student who’s attended AA meetings as part of rehab programs throughout the country. “The steps give you tools to lead you into a sober life you can handle. It’s really scary when you are hitting rock bottom and in your using have destroyed relationships, you maybe have lost a job, you maybe don’t have anywhere to live. It’s really scary to let go of using because you don’t have a crutch, and your life is pretty scary to face sober, so the steps are really tangible things you can follow.”

Some students who attend AA on campus said they don’t think Westminster students know about the resource—and those who do have misconceptions about the organization.

“I don’t think a lot of people are really that aware [of AA and resources] on campus,” Jacob said. “That’s not wholly a problem. I think that the bigger issue that really needs to be talked about is what is AA? As long as there’s the stigma in place, it doesn’t matter if people know.”

One of the biggest misconceptions? The idea that AA is a religious organization.

“We do use the word God, and we talk about things like spiritual experiences,” Jacob said, but he stressed that: “The idea of God is a conception of something greater than yourself—simple as that. One of the other misconceptions is that you have to be certain you’re an alcoholic… It’s an open meeting, so if individuals aren’t certain whether or not they’re an alcoholic, they’re always welcome to come in and talk with us.”

Members of AA are typically hesitant to speak with the media, using the organization’s policy of attraction over promotion to avoid the appearance of centralized leadership. However, student attendees at Westminster’s program said they think it’s important to get students into the meetings who need the resources and community that AA brings—especially on a college campus like Westminster.

“We really just want to let people know what we’re about, and if they choose to come to us, that’s fine,” Forrest said. “We aren’t able to convince anybody to get sober if they aren’t willing, so if you’re willing to walk through the doors, we will work with you until you walk yourself out or you stay in the door—but we can’t do anything before that.”