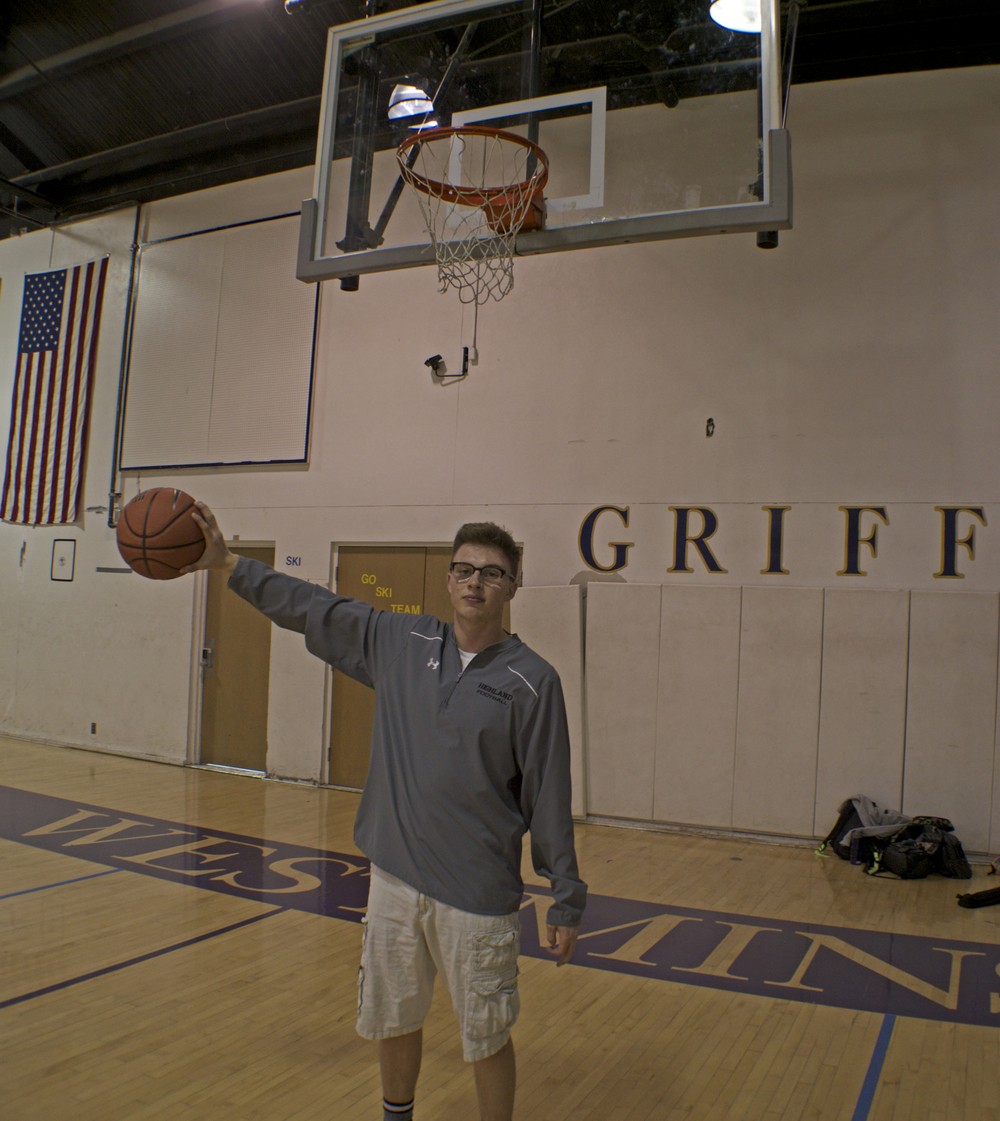 Sophomore Ryzen Benson palms a basketball inside Payne Gymnasium on March 24.  Not only does Benson have a grip on this basketball, but he also has a grip on the bracketology for March Madness.  Photos by Christian Anderson

To most people, March is just another month. But for students like Ryzen Benson, March is meant for college basketball and worshipping the holy bracket.

Benson is a Utah native, sophomore and a biomedical and translational research customized major, which emphasises biology and public health courses.

Benson isn’t an average sports fan. He said he spends hours studying and observing teams until his March Madness bracket is finely tuned and thoroughly researched.

Benson said he loves March and the madness it brings. He’ll be tuned in whether it’s a powerhouse favorite like Kentucky or an underdog like Providence College.

Benson took a minute to explain the method to his March Madness and what sports mean to his life.

Q: How important are sports to you?

A: The reason I think sports are important is because it comes hand in hand with school.  School will always be my number-one priority, but sports are important in the sense that they steer you away from trouble. You kind of run away from that in college, because everyone is on their own and expected to be mature adults. But I feel like sports kind of level your head, and they help you take away from the stress of life and keep you off the streets and out of trouble.

Q: Did you fill out a bracket for March Madness? And if so, how are they going?

A: I filled out two. Honestly, my brackets have been pretty good—I even picked Yale to win, which was a big upset. I still have three of four teams in both brackets for the Final Four, which is pretty good. I’m in the 93 percentile in my bracket, so it’s shaping along pretty nicely. But, there was a couple of games that I think nobody saw coming.

Q: How much research and preparation do you put in before you fill out your bracket?

A: I would definitely say I research more around the eight and nine seed, because when you get an eight versus a nine seed, the teams are really close. And a lot of times, they come from obscure conferences where it’s hard to judge the teams based on their conference record, ya know? When these teams aren’t playing quality opponents, you can’t just say these guys are going to go out and compete against a top-tier team when they ran away with their easy conference.

Q:  How long have you watched college basketball?

Just like the college athletes competing in March Madness, sophomore Ryzen Benson shows off his vertical in HWAC on March 20.  Benson majors in biomedical and translational research and also studies sports with the same dedication and preparation.

Q: So, I’m guessing your favorite college team is Utah?

A: Yeah. I would say it’s between Utah and Stanford. I’ve always wanted to go to Stanford. That’s been my dream school since I was little, so I love watching Stanford.

Q: Do you watch a lot of college basketball throughout the year to stay prepared?

A: Yeah, definitely. College basketball and baseball are probably the two sports I follow year-round. Football I start off really strong, but I kind of taper off. That’s the sport I was best at, so it’s kind of ironic. The thing about college basketball that I love is how fast-paced it is and how hard the kids go every single second. They go to the final whistle. It doesn’t matter if they are up 20 or down 30; it’s always a good environment. And it shows a good example for kids that play sports.

Q: How important is March Madness to you?

A: It’s like a holiday, almost. You kind of feel for the teams, and you can take away life lessons.  Those younger seeds really resemble underdogs in life. They are trying to prove everything they can and that they deserve to be there and that anything can happen. It has really shown this month is “Magic March.” You think you have it right every year, you think you can predict it right every year, and you’re like, “nothing crazy is going to happen this year,” but it’s anyone’s game and anyone’s tournament.

Q: This upcoming draft has some major lottery picks that could change an organization.  What do you think about the lottery system for draft picks?

A: Ooooh. Well, the lottery odds are really cool because the bottom five teams will stay pretty close, but the worst team isn’t always going to get the first pick. You know, that really sucks for that team, but one thing that I don’t like about college basketball is how young these guys go into the draft. Not just because they could develop more in college, but what happens when you have a freak injury? You go for a three-pointer along the baseline and come down on your ankle funny, and you break your ankle. You don’t have a college degree because you focused only on basketball. Don’t get me wrong, there are some guys where basketball is their calling, but there is definitely some guys that could benefit from a couple more years of college.

Q: Do you have a favorite sportscaster or someone you trust for your sports info?

A: When it comes to basketball, it’s gotta be Dicky V—Dick Vitale. DICKY V BABY. And when it comes to baseball, I would say Vin Scully. Maybe Bob Sheppard too. He was an old announcer for the Yankees. They called him the voice of God. He is probably my all-time favorite.

Q: Did you play sports in high school?

A: Yeah, I did. I played baseball, basketball and football.

Q: Do you have a favorite sport?

Q: What did being a student athlete teach you?

A: I came from a school where there was more stress on being a good person in the community rather than just a player. The kind of lessons and the kind of effort that you put into practice while you’re not on the field are the kind of things that reflect who you are on the field. Building character off the field shows once you step on the field.