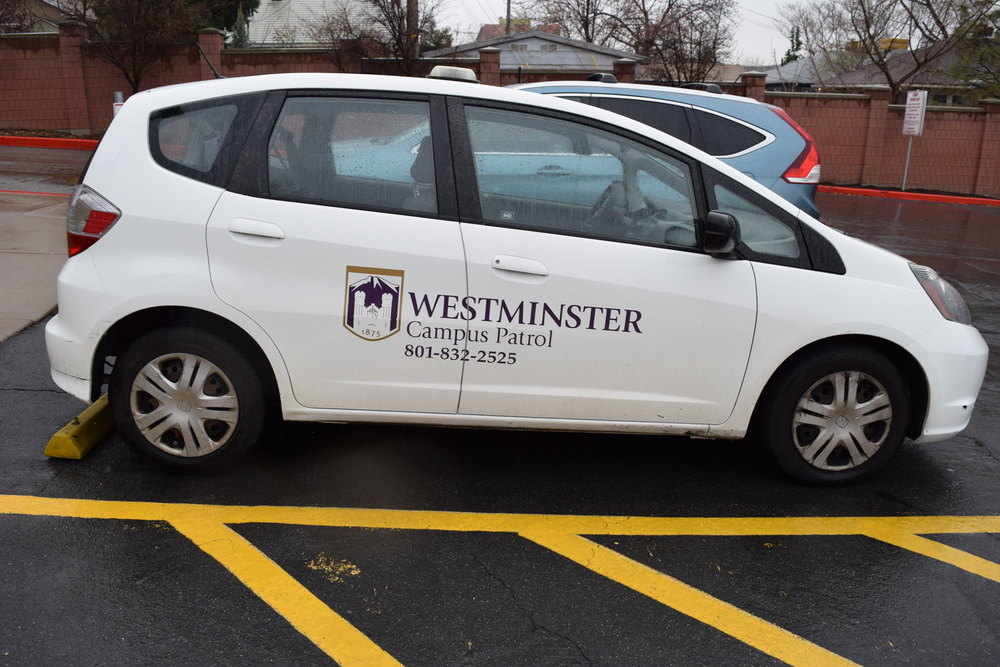 Westminster campus patrol is trained as first responders to almost every emergency there is, including school shootings. Campus patrol officers are also armed with pepper spray and handcuffs, but no firearms—relying on the Salt Lake Police Department for the crises that require them. Photo by Rachel Robertson

There were over 50 school shootings in the United States last year, and Westminster College officials are responding by making sure this campus is prepared and safe in the future.

“Columbine was the first one, and people at that time started talking about how this will never happen again,” said Blake Smith, director of environmental health, safety and laboratory operations. “I don’t think people thought that other shootings would start occurring. It was very weird to think that children and places of education would become vulnerable.”

If anything comes to an issue of safety, Smith is the head person who addresses it. His office handles everything from chemical spills to earthquakes. Within the office is an individual safety department that conducts trainings on emergency preparedness. These trainings can be given to individuals, groups or entire offices. However, many at Westminster are not availing themselves to these trainings.

“Westminster is this little jewel in the middle of the city,” Smith said. “We are this little paradise in the middle of nowhere. What are the odds? Well, looking at it statistically, the odds aren’t great… I think we are still in that transition of culturally shifting to say this is a reality that we need to be on board with.”

The Office of Integral Marketing and Communication was one of the few offices that requested a school shooter emergency preparedness training. Smith and Saeed Rezai, director of campus safety, personally came to the office to do a safety risk assessment.

“We basically start looking at all the things that would be considered risks in whatever scenario we are looking at,” Smith said. “In this particular instance, it was about shooters on campus. We came in to look at things like do your doors open in or out? That makes a huge difference.”

Sheila Rappazzo-Yorkin, executive director of the communication office, was the one who requested the assessment. Rappazzo-Yorkin said she requested it because of her own responsibility in the college’s emergency preparedness.

The communication office participates in educating the campus on different procedures and enhancing the way the college communicates with students. This is done through Blackboard, a software that allows the campus to send text messages, emails and phone calls to all the students, faculty and staff during a crisis.

Because of Rappazzo-Yorkin’s role in this plan, she said she felt her office needed to know how to be safe so it could fulfill its duty in communicating to the public during an emergency.

Rappazzo-Yorkin said the most valuable lesson she learned in the assessment was how to communicate with her staff and work as a team during an emergency.

“Every work area has a different layout, so it’s hard to globally say what the best thing to do is,” she said. “I would strongly encourage people, whether it’s with their units or with their RAs, to encourage practicing those things, having those discussions, even if it’s just with your roommate.”

Rappazzo-Yorkin also encouraged students to update their information in WebAdvisor so the college could successfully communicate with them if something ever did happen.

Many students at Westminster said they feel relatively safe on campus.

“Day to day, I don’t worry about my safety on campus,” said Whitney Walton, senior international development customized major. “Campus patrol does a great job, but I think there have been times where they could do better.”

Many students said they don’t know what they would do in an emergency situation on campus. They also said they didn’t know about the resources available that could prepare them for such an instance.

“I know what to do if I was personally threatened by another person,” said Carissa Christensen, sophomore sociology major. “But I’ve never been talked to about what to do during an earthquake officially. I haven’t been ever really formally talked to if there’s something big like a school shooting or anything—other than common sense stuff.”

The college’s emergency-wide plan is currently going through some revisement, according to Smith, director of environmental health, safety and laboratory operations. He said the future plan will be tailored for Westminster’s size and resources. The administration is also planning on training campus staff on shooter emergencies during staff retreats. After that, these trainings would be pushed to the individual schools.

“I think we are lacking training mostly with faculty and then faculty to the students,” Smith said. “We hold trainings, and we sometimes get dozens of people, but we don’t have a lot of individual offices doing a lot of training… If you’re asking my opinion, I think these trainings should be absolutely mandatory for all students, all faculty and all staff. I think we are moving in that direction, but we haven’t gotten there yet.”

Currently, all staff, as well as campus patrol, are trained in many scenarios. Campus patrol is trained as first responders to almost every emergency there is, including school shootings, Smith said. Campus patrol officers are also armed with pepperspray and handcuffs, but no firearms.

“Based on what we know from Salt Lake [Police Department], they can be here within a couple minutes,” Smith said. “That armed response, they’re trained specifically to deal with this. Our campus patrol are designed to keep you safe for the normal activities of a college. A shooter on campus is not a normal activity. I would like to rely on professionals.”

In public areas in Utah, citizens can have a concealed weapon with a permit. Since Westminster is a private institution, this law does not reach the campus. All weapons are forbidden on the property, including knives, pepper spray and tasers.

“There is a lot of debate around the [no weapons on campus] issue,” Smith said. “Statistically speaking, people who are not trained who carry guns or other weapons haven’t gone through the necessary steps to make sure they are really prepared. Handguns and most weapons are designed to kill people. There’s a huge difference between shooting clay pigeons and actually taking somebody’s life… Arming a whole bunch of people on campus will turn this into a wild west. I think we would end up doing a lot more damage to innocents than we would doing anything beneficial on campus.”

Smith encourages students to reach out to the Office of Environmental Health and Safety to set up personalized trainings for individuals and groups. Smith also suggested students request a copy of the college safety plan so they can have a better idea of what to do in an emergency situation without the training.

“But really, get a couple friends, call me or Saeed, set up a training, and we will come in, and we will talk to everybody,” Smith said. “We will talk about what you need to make a 72-hour kit. We can train on almost anything you can think of in terms of emergency preparedness. We have a lot of expertise in a lot of different areas.”

Smith said emergency preparedness is a concern the administration has, as well, and said he wants the community to accept that emergencies are going to happen. He said all students, staff and faculty are welcome to submit questions to his office and request whatever specialized training they need.

“We have answers,” Smith said. “We want everybody to feel safe, and we do our best we can to make that happen.”