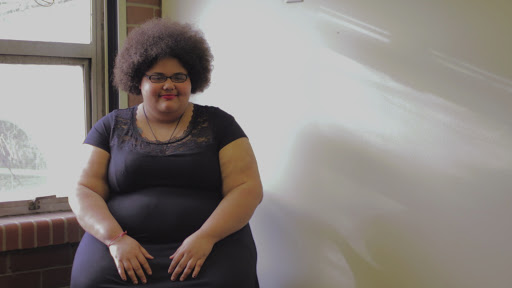 Nicole Tyler, student at Westminster College and local poetry slammer for Salt City Slam, placed ninth in the Women of the World competition in March. She enjoys writing and the competition that poetry slams provide her. Photo by Louise Saafi

Nicole Tyler, sophomore English major and psychology minor, placed ninth out of 96 of the best female, or non-male identifying individuals, poets in the world in the Women of the World Poetry Slam on March 12 in Brooklyn, New York.

The Women of the World Poetry Slam is one of three national events by Poetry Slam Inc. (PSI). Tyler qualified for the poetry slam in October 2015 by meeting certain time constraints. She was then chosen by acquiring the highest cumulative score to represent Salt City Slam at Women of the World. Tyler placed ninth and competed in the final poetry slam on March 29 with the other 11 finalists.

Tyler is not only a student, but also participates as a poetry slammer on the Salt City Slam team and the Westminster Poetry Slam team.

Tyler has always written her own poetry and said she enjoys doing it. Currently, she said she uses her poetry writing to explore her identity as well as what’s happening around her.

“I love that poetry is a way for me to express things that I may not have been able to express before,” Tyler said. “It gives me an outlet to tell a story and process things but in the safety of under three minutes, which is to say I don’t have to go too deep, and I can just process as much as I want at that time. I use poetry to explore how I fit into that bigger picture through my own lived experiences.”

Tyler said her poetry writing is an important part of the slam process, but competing is also an important component of slamming that she embraces.

“I’m just naturally competitive,” Tyler said. “I did bowling for a really long time, and that was competitive. I needed to find a new outlet for that competitiveness that’s in line with my schedule, and slam does that for me.”

Tyler said she feels it’s important as a woman of color to use this platform.

“I think [being a woman of color] is one of the driving forces behind why I continue to do this,” Tyler said. “Not only am I a woman of color, but I am also one of the only consistent women of color that slams in the Salt Lake City community.”

Tyler delves into poetry slam competitions through her writing to tell her story through lived experiences, some of which are most likely to be lived racial experiences.

“I am able to utilize this platform to tell my story as well as stories of racial injustice or anything of that nature,” Tyler said. “Essentially, I make people listen to me for three minutes at a time but more than that, I am able to [create] dialogue afterwards, and that’s what I think is the important part.”

Speaking about these lived experiences can be difficult. However, Tyler said applying real-life experiences with emotion makes it very real for the judges and the audience to connect to.

“What I do is communicate [situations] in a better way than what they see on the internet,” Tyler said.

After hearing the verdict of the Tamir Rice case, for example, Tyler said she wrote a poem referencing the case and read it later that same day for a slam. Spreading a message as a woman of color to a white audience and to white judges, Tyler said these experiences and situations are very real through her writing and performance.

“I was saying, ‘Look, this is real, and this is how I feel about it,’” Tyler said. “I think what really conveyed was my emotion and the connection I had with it because it made it real. These were no longer notions of race. They were actual concepts, and I was experiencing them.”

By continuing to challenge herself by competing in slams, Tyler said her biggest competitor is ultimately herself and that she never quantifies her art for the judges.

“I had a really good poet friend tell me that my business is not with the slam, it’s with the universe,” Tyler said. “If I don’t leave it all out there on the stage, then that’s my problem and a judge’s score is not going to fix that.”

Tyler encourages people who are interested in poetry slam to attend one.

“This is a such a cool opportunity to express yourself through this medium that otherwise may not reach out to people,” Tyler said. “It’s a very non-toxic environment. Even if you are not sure you want to do the competition aspect, go to a slam. Every slam has an open mic, which is a judgement-free zone. I guarantee you that people will tell you how much your poem meant to them, and I think that is what is some of the most important parts of a slam are the new voices. I love hearing them.”

“Everything Abdurraqib produces, I’m like, ‘Yes. More please,’” Tyler said. “Both Sierra and Blythe write about real experiences, and their pieces are what motivate me to continue writing because it is so raw and so real and so vulnerable. I aspire to be like that.”

Salt City Slam happens on the last Monday of every month at 8 p.m. in the Sam Weller Bookstore at Trolley Square.