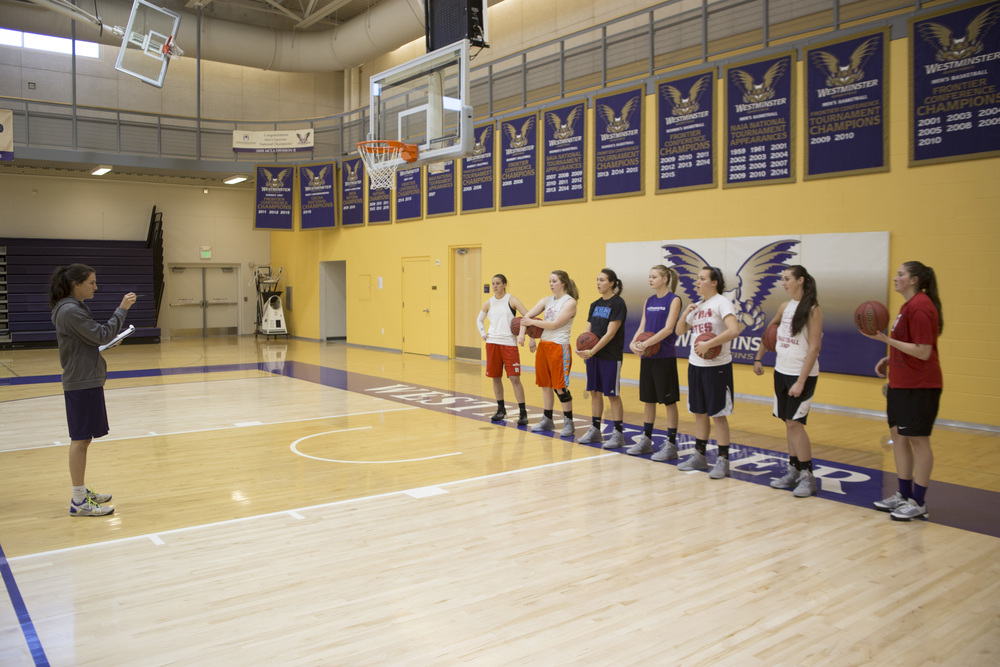 Assistant coach Alli Blake talks with members of the women’s basketball team. Even though the basketball season is over, the team still has team meetings, weightlifting and team workouts to attend. Photos by Mika Pinner

Many student athletes at Westminster agree that had they not played sports in college or growing up, they would not be where they are today.

The likelihood of high school athletes playing in college at any level affiliated with the National Collegiate Athletic Association (NCAA) is on average 6.02 percent for men and 8.01 percent for women. Wrestling ranks lowest for men at only 2.6 percent and basketball lowest for women at 3.8 percent, according to the NCAA.

Since Westminster is currently going through the transition to the NCAA, a brief overview of the academic requirements for students is different from years past. College athletes graduate at rates higher than college students in general, according to the NCAA.

“I wouldn’t be at Westminster without sports,” said Riley Reidhead, junior education major. “[Sports] give me an opportunity to get to know my professors better.”

At the Division II level, 55 percent of student athletes graduate, with only 49 percent of the regular student body graduating from Division II institutions, according to the NCAA.

Nearly 20 percent of student athletes are first-generation college students. For some, sports is the only way they could pay for college.

“Without an athletic scholarship, I wouldn’t be where I am in school,” said Lancee Whetman, junior economics major. “Although it can sometimes be hard to balance school and sports, I wouldn’t change my decision to play in college.”

“Are we perfect?” asked Shay Wyatt, Westminster athletic director. “No, but that comes with the learning curve and, collectively, we are pretty good. I am always impressed with how well [student athletes] do in their classes. [Westminster’s student athletes] personify what it means to be a student athlete. They are a great example of balance between athletics and academics.”

Although athletics can be time consuming and difficult to manage practice, film, meeting, travel and keeping up on school work, most student athletes wouldn’t change their college experience.

“Some days it’s hard for sure, and I question my decision to play,” said Whetman, junior economics major. “However, it has also provided me with great relationships, opportunities and also challenges. Overall, I am grateful that playing a college sport has provided me the ability to get a great education.”

Editor’s note: Mika Pinner is a member of the women’s basketball team.