Allen Park, commonly misnamed as Hobbitville, was established as a bird sanctuary in 1931 by Dr. George Allen and his wife, Ruth Larsen Allen.

The name Hobbitville came from rumors that dwarfs lived in the private community, due to the small architecture within the park.

Chad Farnes, a resident of Utah County and blogger, said in one of his posts that he researched and explored Allen Park to find out more about the location. Although the myth isn’t entirely true, there are still many interesting and mind-boggling aspects of Allen Park.

For nearly 30 years, Dr. Allen collected more than 700 bird and wildlife specimens from around the world and housed them in Allen Park, according to Farnes’ research.

Over the years, the amount and variety of birds has decreased, but Allen Park is home to some types of waterfowls and peacocks, Farnes wrote. The bird sanctuary was open to the public until Dr. Allen’s death in 1961.

“In order to help financially sustain Allen Park, Dr. Allen began to incorporate rental residences into the neighborhood and he built or relocated several small structures to Allen Park in the 1930s and 1940s, some of the cabins were built by local craftsman in exchange for free medical care by Dr. Allen,” said Quist in an Examiner article.

Chris Stockslager, Westminster graduate, had an aunt live in Allen Park in the 1990s.

“[Allen Park] has a lot of run-down houses in it that are taken from miners that used to live and work at Kennecott copper mines,” said Stockslager, who has memories of visiting Allen Park. “They weren’t transferred or planted very well, because pretty much all of the foundations are unstable enough that a few houses are slowly falling into the creek.”

Stockslager said his aunt’s house was tilted so much that the cupboards would open by themselves.

Ryzen Benson, sophomore biomedical and translational research major, has had a personal encounter with Allen Park that he said changed his outlook. 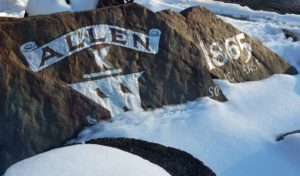 A layer of snow blankets the scattered folk art and historic structures throughout the property of Allen Park on Jan. 26 2019. (Photo by Joshua Messier)

When Benson was a senior in high school, he decided to check out Hobbitville one night with a group of his friends.

“Everyone was jostling so they didn’t have to go first,” Benson said.

Once all of the high schoolers were inside, they tried to be quiet and sneak around without being seen.

“We knocked on a few doors, but nothing happened,” Benson said.

Benson and his friends noticed a man in the distance. Most of the kids sprinted out of Allen Park screaming, but Ryzen and two of his friends stayed to explore deeper.

“There was an eerie feeling, like you’re not supposed to be there,” Benson said.

Benson and the other two boys encountered one of the residents of Hobbitville and were offered to come inside to talk. Once they were inside, the boys noticed that the man was watching basketball like anyone else would.

Benson said their night went from “completely terrifying” to “really interesting” in a matter of seconds.

“It’s sad because these are just normal people trying to live their lives and run a business,” Benson said. “The myth keeps getting perpetuated.”