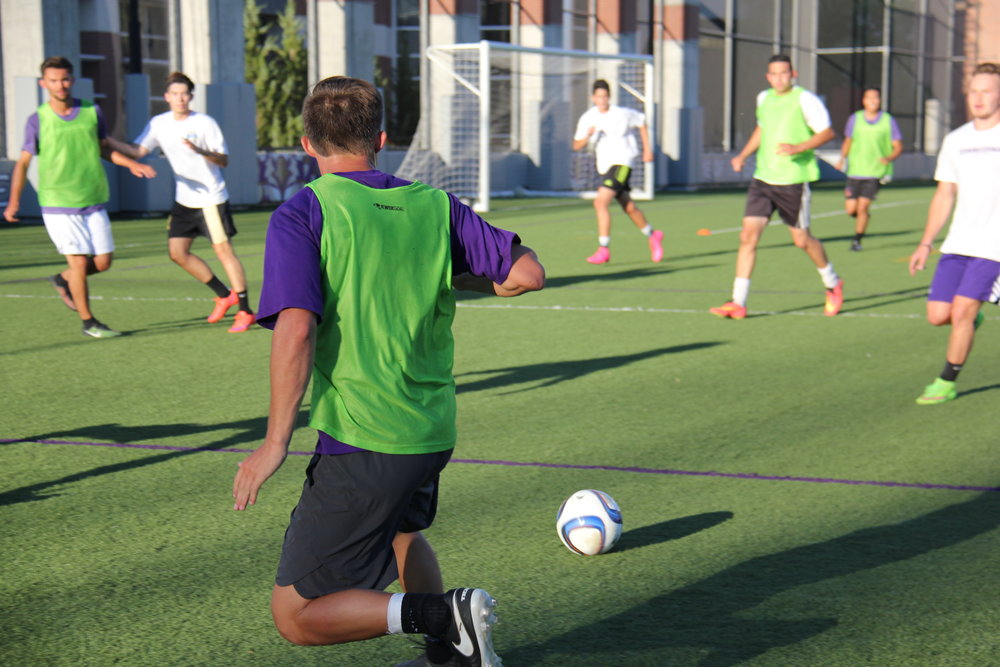 Hunter Stutz, junior business management major, prepares to receive the ball and initiate an attack on the goal. The college’s transition to Division II has left many athletes frustrated, as they are now ineligible for post-season play. Photo by Bre Empey

Westminster is using an alumni donation to pay the $120,000 one-time fee for the NCAA transition, according to Shay Wyatt, Westminster’s director of athletics.

The college received notification that the program successfully completed candidacy year one (2015–2016) and was recommended to advance to candidacy year two (2016–2017).

The Griffins will enter their second season as a member of the Rocky Mountain Athletic Conference in 2016–17. Per conference rules, the Griffins will be ineligible to participate in any conference postseason events that have an automatic qualifier for the NCAA Championships, and they will not be eligible for NCAA II postseason play.

If the benchmarks set for the next two years are met, the Griffins will be full Division II members with eligibility for postseason play in 2018.

That means current seniors and juniors will be unable to compete in NCAA Championships or NCAA II postseason play for most of their careers as college athletes Westminster.

For many players and coaches, postseason play has been hard to give up.

“I believe our team understands; it’s just unfortunate timing for obtaining post-season play,” said Shelly Jarrard, women’s basketball head coach. “But we are still playing to win. While not ideal, it’s not what competing on a team is all about. There’s so much more that is gained, and I believe our players are aware of that.”

Westminster athletes have the opportunity to play at a higher level, but the transition hasn’t come without frustration.

“As a member of a team, I’m frustrated that we are unable to compete in post-season play,” said Alicia May, senior captain of the women’s soccer team. “That being said, I’m not discouraged about the decision to join this division or conference. If anything, I feel that we are more determined to prove that we belong in this conference and am optimistic that we will participate in postseason play in the upcoming years.”

Although some students think this probation period feels like punishment, Mason Goodhand, head coach of the men’s lacrosse team, said student athletes should be excited and proud to pave the way for future Griffins in the NCAA.

“The dream of attaining that goal, of playing in a conference championship, cannot be a primary motivation for an athlete,” Goodhand said. “If a kid comes in and he or she makes that their primary motivation, they didn’t think about it before they started. This is what I call a fixation on a negative that’s beyond their control. There’s something special about the dedication of the players on our teams. They have to find a way to get motivated every day, because that end goal that was always there—playing for a championship the day you start a season—is now gone.”

The transition to full membership in the NCAA is far from over, but it’s clear that Westminster’s coaches and athletes are in it for the long haul.

“I think this group will look back one day and be very proud of starting the way for Westminster in the NCAA,” Jarrard said.

(Editor’s note: Bre Empey is a member of the Westminster women’s soccer team.)