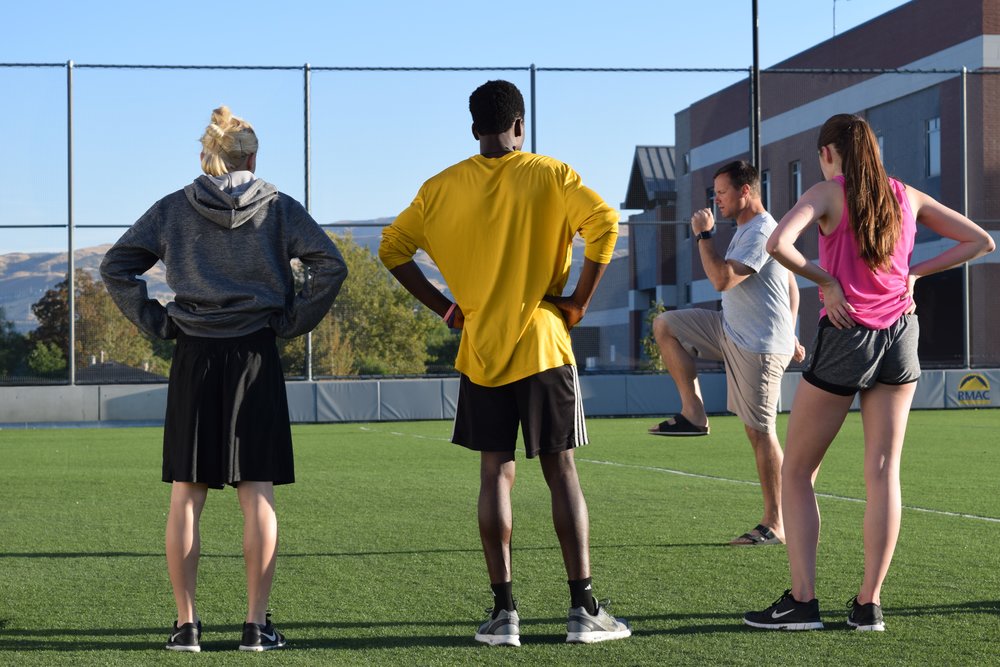 Assistant cross-country and track and field coach Andrew Harestad demonstrates an “A Skip.” Harestead said the most important thing about his job is to keep the athletes healthy and improving. Photo by Bri Miller.

With heavy breaths and sweat dripping down their faces, the members of the men’s and women’s track and field team gratefully drank from their water bottles as their coach finally told them to rest.

Track and field and cross-country have been training intensely for their upcoming and current seasons, and the teams have been growing steadily.

“We have difficult work outs,” said Daniel Quinn, Westminster’s head coach of track and field and cross-country. “Our practice schedule is Monday through Friday, with their own training on Wednesdays, but I think if we were a full D1 school the workloads would be double what they are. I keep the reality of academics first and running second. So, I try to keep a balance there.”

Quinn said he enjoys the challenge of helping the athletes improve.

“Cross-country and track and field are here, they’re growing and it’s going to get competitive,” Quinn said. “Every year we are getting better. Every year we are setting school records. They’re not top line records yet, but they will be.”

Men’s and women’s track and field train on Dumke Field in preparation for their seasons. Cross-country will compete at its next meet in Boulder, Colorado the weekend of Sept. 30, and track and field will begin its competitive season in October. Photo by Bri Miller.

The number of athletes on the team doubled from two years ago, and Quinn said once the numbers are balanced the program will continue to improve. He said his goals for the year are to start running races his athletes haven’t run before and to fill more team positions and events.

Because Westminster doesn’t have a track on campus, students can’t support the athletes on campus. During the season, cross-country travels out of state, and track and field competes at schools across Utah.

“A lot of people don’t know we have a team at this school,” said Mitch Sims, a junior aviation management major on the cross-country and track teams. “We understand that we don’t have meets at home and we don’t expect people to watch every event, but it would be nice to have a little more support.”

Cross-country will compete at its next meet in Boulder, Colorado the weekend of Sept. 30, and track and field will begin its competitive season in October.