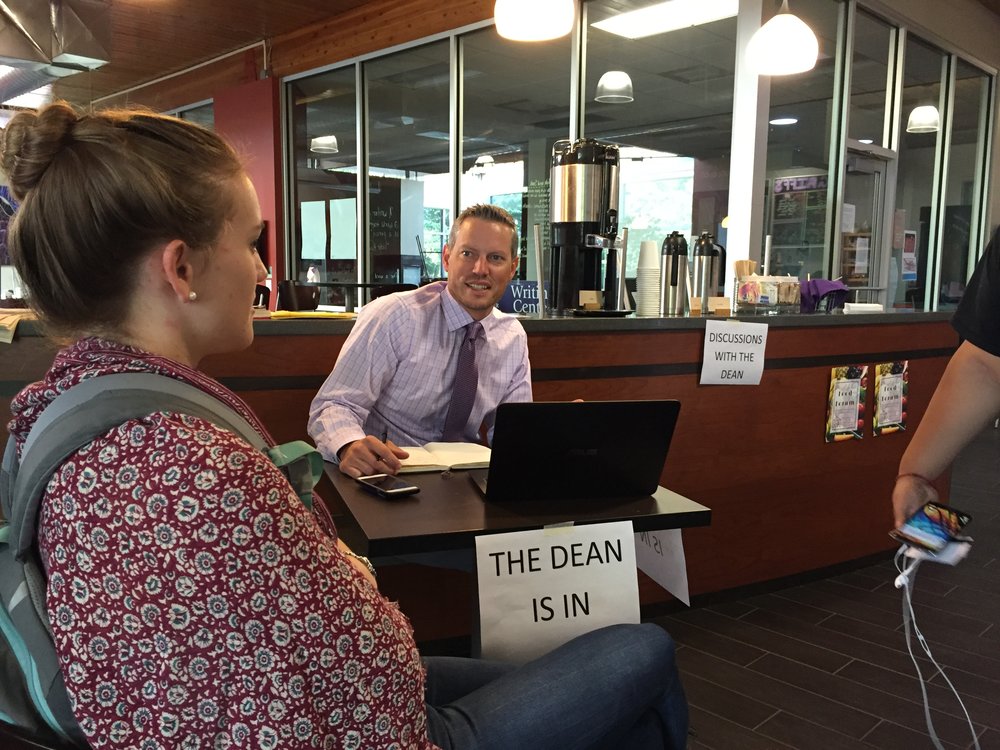 Dagny Helander, a senior neuroscience major, discusses her semester with Dean of Students Mark Ferne in the Bassis Student Center. Ferne handed out free coffee in exchange for conversation on Sept. 21 as part of his Discussions with the Dean program. Photo by Kennedy Mason

Mark Ferne, dean of students and associate vice president for student affairs, said he wants to go the extra mile and connect with students—from hosting Defeat The Dean, a table-tennis match against students, to delivering food to the residence halls during finals week as part of The Dean Delivers.

To try to take that connection to a more personal level, Ferne said he started the program Discussions With The Dean.

“I try to continue to have connections with students beyond what a normal vice president at another institution would have,” Ferne said.

Once a month, Ferne hosts a town hall where students can snag a free cup of coffee or hot cider to start their day in exchange for one thing—to tell him what they love about Westminster or what they would change.

“I wanted to at least still have some part of my position that are one-on-one conversations so that I can hear how that experience has been for them,” Ferne said. “What are their frustrations? What are their struggles? What do they really love about this institution? [And to hear] ideas and ways for Westminster to be a better place.”

Melissa Salguero, a first-year theater education major, attended the first Discussions with the Dean town hall on Sept. 21 to express her problems with the automated door buttons on campus. Ferne walked Salguero through a maintenance request, and the maintenance team was inspecting the problem in front of them within minutes.

“I thought it was important that the dean heard first-hand on what students had to say,” Salguero said. “Westminster is not perfect; no school is. New issues come up all the time, so this is a perfect way to resolve things.”

Nicole Tyler, a junior English and psychology major, said she was on her way to get a cup of coffee from the Basis Student Center when she saw Ferne and decided it would be a good time to continue a previous conversation about victim’s advocates on campus.

“It’s a good way to pass information,” Tyler said. “Why not go directly to the source instead of going around?”

Though some students may feel hesitant to talk to administration, senior neuroscience major Dagny Helander said the coffee gets the conversation going.

“Mark is a pretty approachable person,” she said.