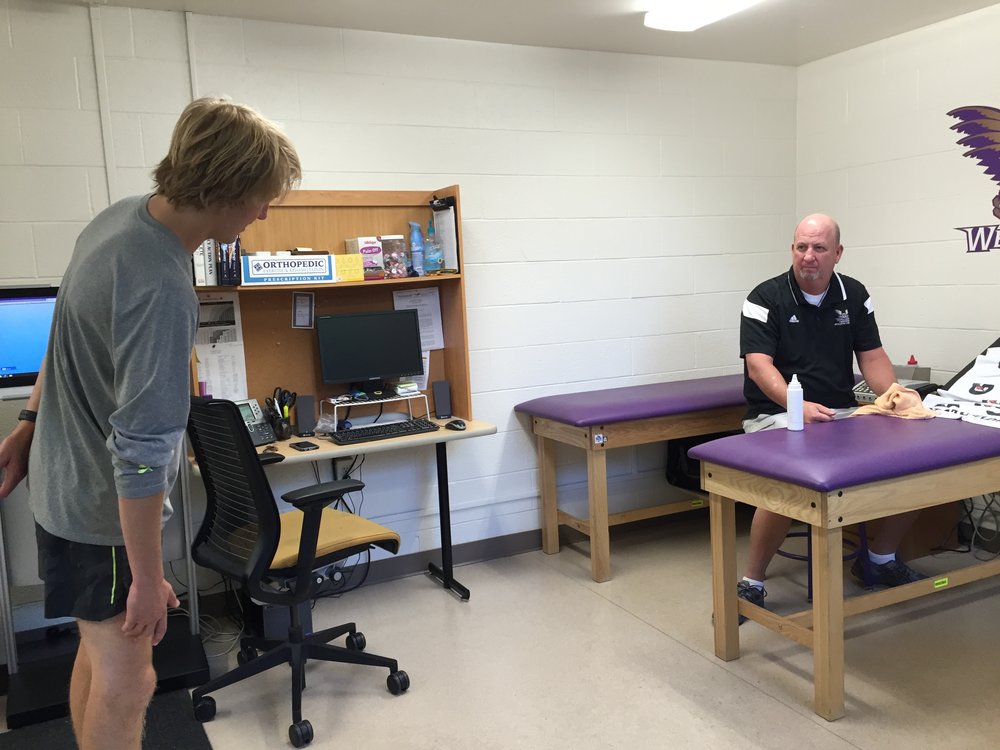 Rick Hackford traded in his breakfast of eggs, bacon, and potatoes for two packs of instant oatmeal the day practices started for Westminster athletes. Hackford has worked as an athletic trainer in many college divisions but said Westminster’s transition from NAIA to NCAA has made his job as head athletic trainer both more difficult and more rewarding.

Madison Roemer, a work study student in the athletic room, said no one knows how much Hackford is at Westminster.

“He’s here from 7 in the morning until 9 o’clock at night,” Romer said.

Q: Has Westminster’s change to DII affected your job as a trainer at all?

A: As far as my job with the athletes, it hasn’t had any impact. [With] my job as the head athletic trainer, there’s been a lot of administrative things that are different. We’ve had a lot of policies in the athletic training room that we’ve had to really beef up to meet NCAA standards. Then adding a drug testing policy and knowing all the ins and outs of the NCAA has really caused things to be a lot more complex.

Q:  What kind of policies or regulations stick out to you that are different from NAIA?

A: Drug testing policies are probably one of the biggest. As part of the NATA (National Athletic Training Association), we’ve always had guidelines for things like lightning and skin disease, but the NCAA are a lot more regulated on what those policies are. We’ve had to institute lightning, weather, heat and cold extremes. If an athlete gets a skin disease or skin lesions, there are certain things we have to do as far as taking care of those. We have to know what those policies are. The NCAA handbook is around 128 pages, and we have to make sure that we’re not only in compliance with our national certification board but also with NCAA.

Q: What governing boards do you have now that you didn’t in previous years?

A: We have three governing boards now rather than the two before. We have the state, NCAA and NATA. In the state of Utah, we have to be nationally certified through NATA. We also have to be licensed. That’s not always the case in most states. There’s about 30 states that require both. Most have some sort of athletic training certification. Texas doesn’t, though, because they have their own certification. California has no regulation with athletic training.

Q: Since going DII, do you see more injuries?

A: We don’t. We’ve always been very competitive. We’ve actually seen some things decrease because we’ve had to implement the weight training programs with the certified and licensed strength and conditioning coach. They’re better prepared when they go on the field.

Q: Have you seen a change in students’ motivation since the transition?

A: Our athletes have always been highly motivated. NCAA has seemed to be getting us a little more competitive. I think that’s one of the great things about joining the NCAA. Competition for the individual spots and scholarships is higher than I think it was when we were NAIA. High school kids don’t even know what NAIA is. They all know what NCAA is, so if you’re part of the NCAA, you get more attention from high school athletes. I think we might be seeing a lot higher caliber.

Q: What pressure has being a head athletic trainer in DII put on you?

A: The only pressure is administratively. Having to communicate with other athletic trainers throughout the conferences has always been part of it, we just have a few more schools. There’s more compliance issues. There’s more ‘What can I do? When can I do it?’

Q: What’s your favorite part of your job?

A: The athletes, by far. That’s why I’ve stayed at Westminster as long as I have. I don’t know if I would have stayed without the quality of athletes. They’re good athletes, they’re good students, they’re good people. I worked with two D1 schools. The athletes were good athletes, but sometimes a little arrogant and cocky. They’re harder to work with because they think they deserve special treatment. You don’t face that here at Westminster. The athletes here have to be good students, too, because we don’t have full ride scholarships for athletes.

Q: What’s your least favorite part of your job?

A: This is going to sound funny, but it’s the [administrative work]. I love being interactive and taking care of the students. That’s why I got into athletic training—to make people feel better, to create a better environment for them to stay healthy and keep doing what they’re passionate about. All the bookwork and the paperwork kind of gets in the way of all that.