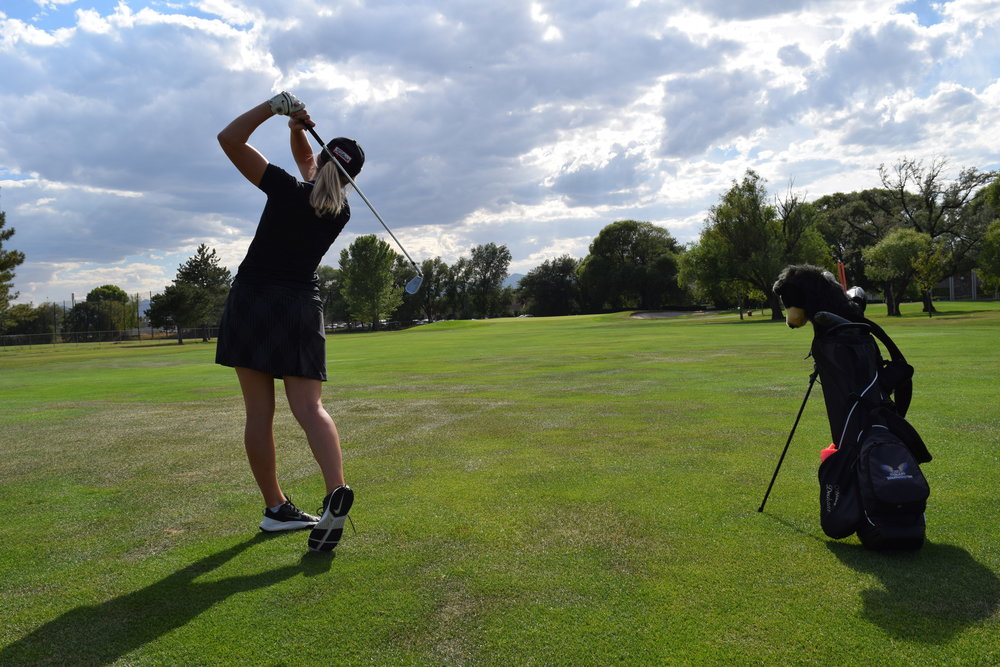 Ashley Dechant, a junior finance and marketing major, swings at the ball during practice with the Westminster women’s golf team on Aug. 31 at Glendale Golf Course. Dechant said she started golfing when she was five and is now starting her third season at Westminster. Photo by Kamarie DeVoogd

For the past few years, Westminster’s women’s golf team has been improving quietly, garnering little attention from the campus community. This year, the team is gearing up for the most successful season it’s had in years—picked to finish seventh out of 12 teams by the Rocky Mountain Athletic Conference (RMAC), according to the 2016 Women’s Golf Preseason Coaches’ Poll.

The team is also a powerhouse in academics.

“A lot of people don’t even know we have a golf team, but getting recognition is nice,” said Audrey Kriss, a member of the women’s golf team and a junior marketing and sociology major. “We are good at what we do, and academically standing [we’re] the best team in RMAC.”

The team is young and growing, with no seniors and only two juniors.

“This is the first time the golf team has been recognizable since our coach, Jenteal, played a few years ago,” Kriss said. “We have a young team; there aren’t any seniors, so this is also a growing year. We are definitely a force to be reckoned with.”

This is Jenteal Jackson’s second year as the head coach of the women’s golf team.  She spent two seasons as the team’s assistant coach and is a former Griffin herself.

Jackson played for Westminster in 2011 through 2013. Before that, she played two seasons at Brigham Young University.

“[The players] really dedicate themselves by juggling school and the team,” Jackson said. “We’re in for a good year; we have all the ingredients to be successful.”

Members of the team said it’s difficult for the student body to support them because all of their tournaments this season are out of state.

“It is kind of hard to support us, but we might have one tournament that is going to be a Westminster Invitational,” said Ashley Dechant, a junior finance and marketing major.

Jackson said she wants to create a local tournament but said it might not be a possibility this season.

“It might be hard this year, but within the next two years we hope to get it going,” she said. “That way it will also get people more involved with the team.”

Although there may not be opportunities to watch the team play in person, Jackson said there are other ways Westminster students can support.

“Know who’s on the team and congratulate them on their performance,” she said.

The Griffins will send five players to their first RMAC tournament of the season on Sept. 12 in Aurora, Colorado.