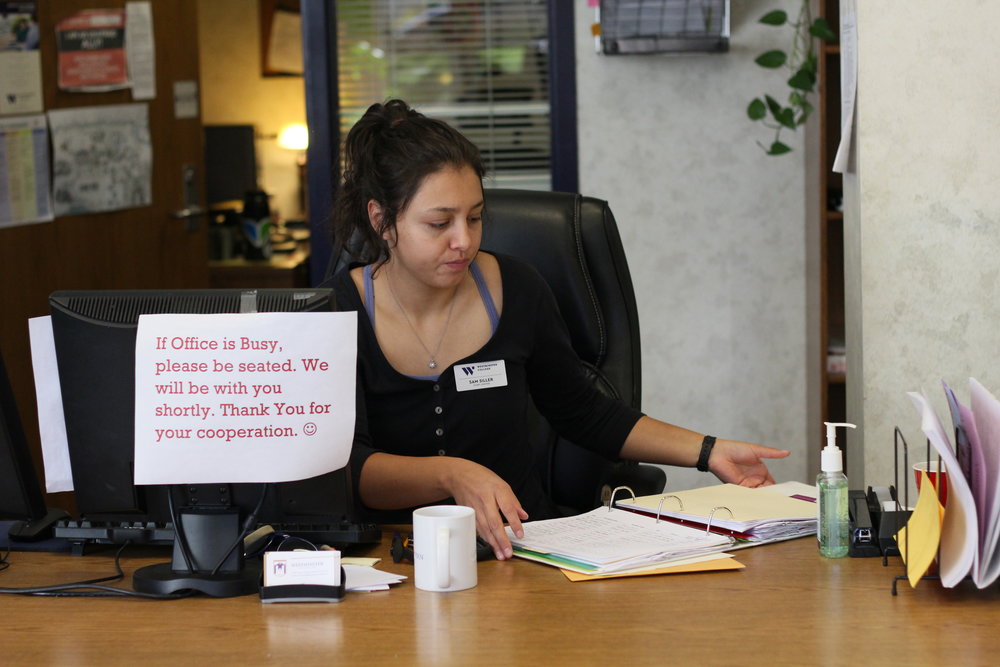 Sam Siller, a senior environmental science major, works at Westminster College’s START Center on Oct. 5. Westminster’s new Four-Year Guarantee is an academic plan that ensures students complete their degree in the designated time frame and benefits students who have a double major in addition to their WCore classes, according to the START center. (Photo by Hasib Hussainzada)

Westminster College’s Four-Year Guarantee is an academic plan that ensures students complete their degree in that time frame — or the college pays their tuition for the fifth year.  Though this may seem beneficial, it can be stressful for some incoming first-year students trying to decide whether to sign the contract.

The guarantee requires students to declare their major by the end of their second semester and to remain in good academic standing. It also requires them to complete a minimum of 31 credit hours per year and provides them with an academic plan telling them which classes they are required to take and when.

If the classes are unavailable and they aren’t able to graduate, that’s when Westminster steps in to pay for the fifth year.

“The benefits are to start and continue with the idea that you will graduate in four years,” said Christie Fox, who manages the Four-Year Program. “It saves time and money. That’s why we have the plan.”

This plan benefits students who have a double major in addition to their WCore classes, which may make them unable to finish in four years, according to the START center.

The plan was enacted in the fall of 2015 so no student has completed the guarantee.

However, because the plan requires students to declare a major and commit to an academic scheduling plan that confines them to a specific pathway, some first-year students have expressed concern that the requirement is too restricting.

“It closes you off to other options,” said undeclared first-year student Paige Llewellyn. “How do you really know that’s what you want to do? It determines the rest of your life.”

The requirements also concern first years who want the opportunity to change majors if they change career plans.

“I don’t have much experience in the degree that I chose, and I’m ambivalent about wanting to do it as a career,” said first-year neuroscience major Dylan Jones. “I want to be able to explore other degrees.”

Some students also question the need to commit to the Four-Year Guarantee — especially because, according to Fox, “most students already graduate within four years.”

Though some first-year students don’t see it as necessary, Christopher LeCluyse, an English professor and the chair of the college curriculum committee, said the guarantee has its advantages.

“I think the plan is beneficial because it not only helps students stay on track to complete their degrees but also holds the college accountable,” he said.