Gabi Sanchez, ASW’s speaker of the Senate, said first-year students Caz Woodall and Morgan Mischo — who were the only two candidates for the positions — have hit the ground running in their new roles.

“They have just been so motivated coming into the position, which is really great,” Sanchez said. “It’s a hard position to adjust to because right off the bat there’s a lot of meetings and the ASW retreat and expectations that we have for them, but they came in with ideas.”

Now that they’ve had some time to adjust to their new roles, The Forum caught up with ASW’s new senators to find out how they got involved and what their goals are for the rest of the year. Their responses have been lightly edited for clarity and conciseness. 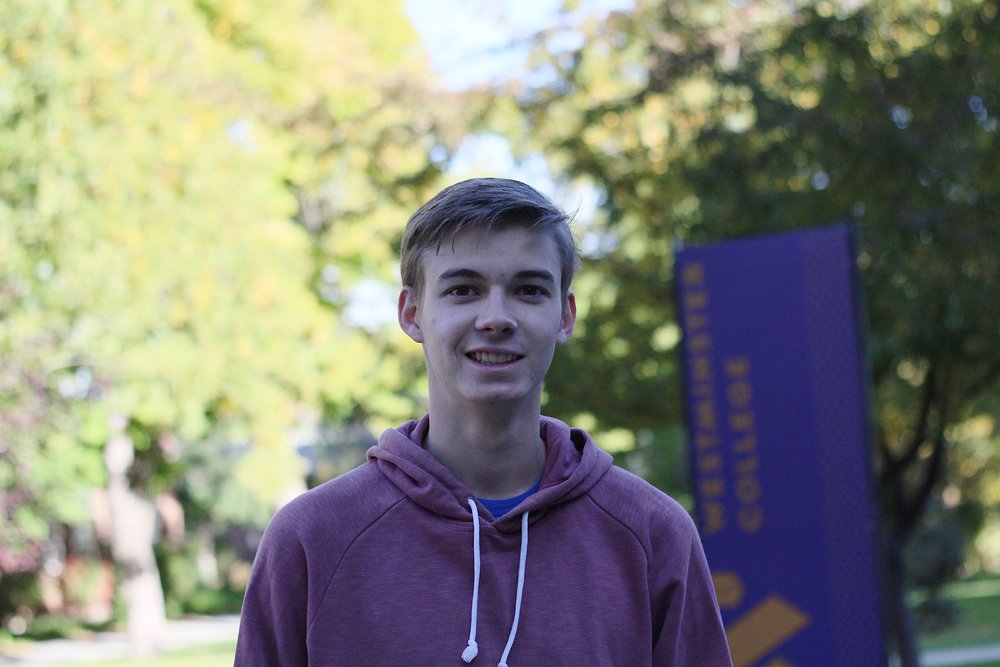 Caslin Woodall, a first year physics major, is one of ASW Senate’s two newest members. “I noticed that ASW here had a say on campus and they could actually make changes for the campus,” he said. “I was really interested in that, so I wanted to be a part of it. (Photo by Hasib Hussainzada)

Q: Why did you run for Senate?

A: High school student government was really just a piece of crap and they couldn’t do anything. But I noticed that ASW here had a say on campus and they could actually make changes for the campus. I was really interested in that, so I wanted to be a part of it. So I ran not really knowing if I would win or lose, but I’m here now.

Q: What are your goals while in Senate?

A: Well, I’ve only attended one Senate meeting, so as far as how much I can actually do I’m not too familiar with this year. Looking at what ASW did last year, I’m kind of hoping to, I guess, continue those steps of making sure this campus stays a place where we can all live in together and have fun as a student body and be connected.

Q: How do you think you can contribute to ASW?

A: I feel like I’m pretty open-minded, so being a first-year senator I have a fresh perspective on things. I’m not pre-biased based on previous years of Senate. I don’t have pre-formed ideas on what’s going on, so I can bring in a fresh view [and] new ideas. Where others have been in Senate for a couple years, they kind of have these ideas formed already — not in a bad sense, just from experience. So me being inexperienced is almost like an advantage for now.

A: It’s a great school and it’s in the Rockies, so a little bit of both skiing and studies. I’m from Texas. You don’t ski in Texas, so I had to go somewhere I could ski.

Q: Did you start school with the intention to join ASW?

A: I had no pre-formed ideas before I even got to Westminster. I was not aware of student government or clubs or how involved the campus was, to be quite honest. I got here and through freshman orientation, there was the ASW presentation over the Senate and other branches. That piqued my interest, and so I was like, ‘Hey! ASW Senate. I can actually make a difference.’ So that’s what kind of spurred me on the run.

Q: What are your expectations for Senate this year?

A: I think it’s too early to say I have any expectations yet. I’m not too sure what to expect. I can say that ASW Senate has expectations, I’m just not really a part of that yet. I haven’t been here long enough to form my own.

Morgan Mischo, a first-year political science major, is one of ASW Senate’s two newest members. “I definitely want to make sure that people are getting their voices heard,” she said of her goals for the upcoming year. (Photo by Hasib Hussainzada)

Q: Why did you run for Senate?

A: I had no inclination to run for student Senate, because I was like, “Ah, you know, I’m sure there’s a ton of people running and maybe one of them is really gung-ho about it.” And then I ran into my peer mentor, Carissa Uresk, and she was like, “Morgan you should run, because not many other people are running.” And I mean, that’d be great. I feel like I can make some changes to this school. Also I’m from here, so I feel like I know about the culture here and can kind of implement those thoughts into how the school runs.

Q: What are your goals while in Senate?

A: It’s kind of hard to say now, because I’m only seven weeks into the school year. So I’m not sure yet what I want to change within the school, but I definitely want to make sure that people are getting their voices heard (I know how cliché that sounds) and that it’s just a good experience for myself and everyone else here at Westminster.

Q: How do you think you can contribute to ASW?

A: I think that Westminster is a very liberal school, and I also lean to the left. But I come from a culture that is very right leaning. Religiously speaking, I grew up kind of in the minority, so I think I can kind of bring the mindset of acknowledging both sides of an argument and implementing both sides of stories into the student Senate and into Westminster itself.

Q: Have you been a member of student government before?

A: I was looking for a liberal arts school because I love the idea of small classes and kind of having a more holistic view of education. I’m from Utah and I came and toured Westminster, and it just felt like the kind of people I was. Like, everyone’s a skier, everybody’s kind of a hippie, there’s Birkenstocks everywhere — it was my kind of vibe. And plus, the Honors program is amazing, and I wanted to be a part of it.

Q: Did you start school with the intention to join ASW?

Q: What are your expectations for Senate this year?

A: I think the people that are in in Senate are so amazing and really want to change things. Also [ASW President] Ben [Pok] is so organized and such a great leader. So I really see us pushing a lot of legislation through, especially in this turbulent political climate, and just making this a safer place for everyone who goes here.

Marina McTee
Marina McTee is a senior communication major at Westminster College. She is specializing in journalism and content creation. She hopes to combine her passion for journalism with her passion for all things media and work for a media outlet such as SLUG Mag or Vice someday. She is dedicated to reporting news and creating media specialized for the internet world so it is accessible to all.