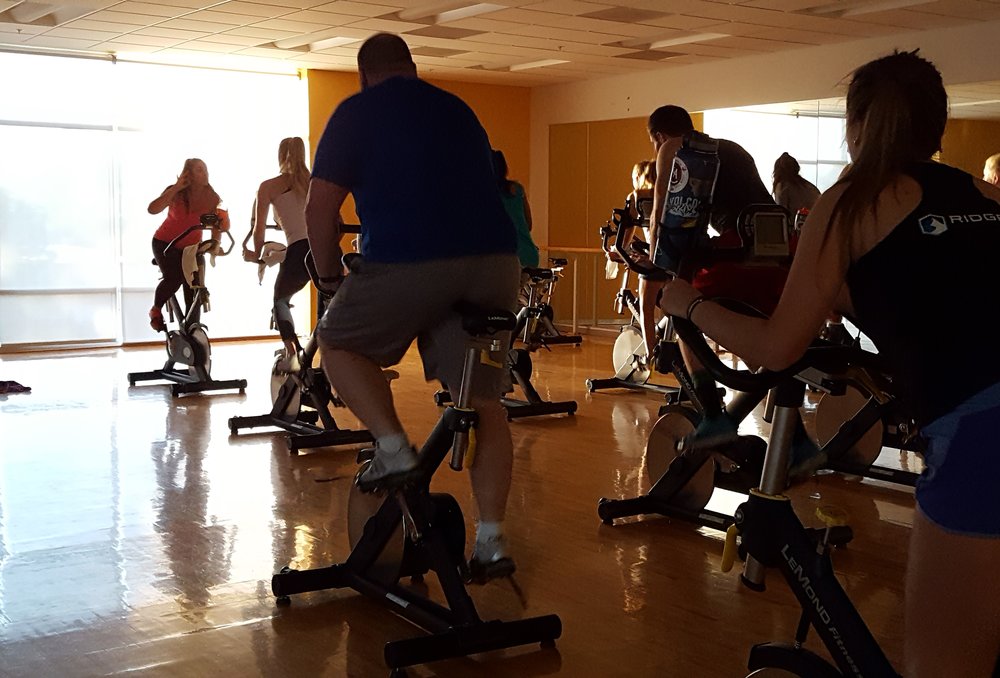 Westminster’s Health, Wellness and Athletic Center (HWAC) offers five cycling classes throughout the week. Katie Henderson, a senior public health major, said she enjoys cycling over other classes at HWAC because she has more control.

“When we’re just on the bikes, you can just turn up the resistance if you’re feeling like you need something extra [or] you can turn it down and have a light workout,” said Henderson, who has been cycling for over two years. “You don’t always get that in other classes.”

Unlike outdoor cycling, Henderson said Cycle Fusion students are out of the elements, in a group mentality and a controlled environment. But that doesn’t mean students won’t face challenges in the class.

“[The hardest part] is when the classes are smaller and the intensity is just a little lower, or it’s finals week, or you just have a lot of other stuff on your mind — it can become overwhelming in the class and you don’t get out of your mind,” Henderson said. “Those are the hardest workouts for me.”

Students said their instructors drive their passion for cycling. Having an instructor of a similar age has made Cycle Fusion more relatable and fun, Henderson said. It suggests that everyone in the class, including the teacher, is in the workout together.

Megan Poling, a senior marketing major, has been teaching Cycle Fusion at Westminster for a little over two years and has noticed she gets a pretty full class, depending on the time of the semester. Though she said more people come back to the class than those who drop out, that’s not to say some students might try it and not like it.

“I love seeing familiar and new faces, but you really get to know the members, especially those that are consistently going to your class, and they become friends,” she said.

Poling took her first indoor cycling class when she was 12 and initially disliked the intense environment. But she gave it a second chance when she started college.

“It’s a fun, high-intensity way to get in a great workout,” she said. “If you’re having fun then the endorphins come with it. I just love the environment, the people and meeting new people.”

Poling said group exercise has many benefits — emotional, social and physical. In her own classes, she said she tries to create a space with good music, a fun vibe and a good workout to help students feel more comfortable and want to come back.

“As an instructor, I love to facilitate new relationships, have new conversations [and] get people’s minds off the fact that they are enduring this really brutal workout,” said Poling, who said she asks the group questions, even if they don’t respond. “I just want [students] to know that we’re doing it together.”

Laura Iverson, the assistant director of fitness, wellness and recreation at HWAC, said she has seen a rise in popularity in the cycle fusion class — especially since this class is the only one, other than dance, that is cardio-based.

“I’m happy cycling is so popular and I’m glad that it’s a form of cardio and exercise that people feel comfortable doing and that people are excited about,” she said. “I’m happy both yoga and cycling have been really popular classes for a long time, and I’m happy to see it’s been consistent. We aren’t seeing the fads come and go like we used to.”

There’s no competition, no skill, it’s convenient and the group setting is great motivation, Iverson said, which are all reasons the class has been so popular. But, she said, students should remember it is a high-intensity workout.