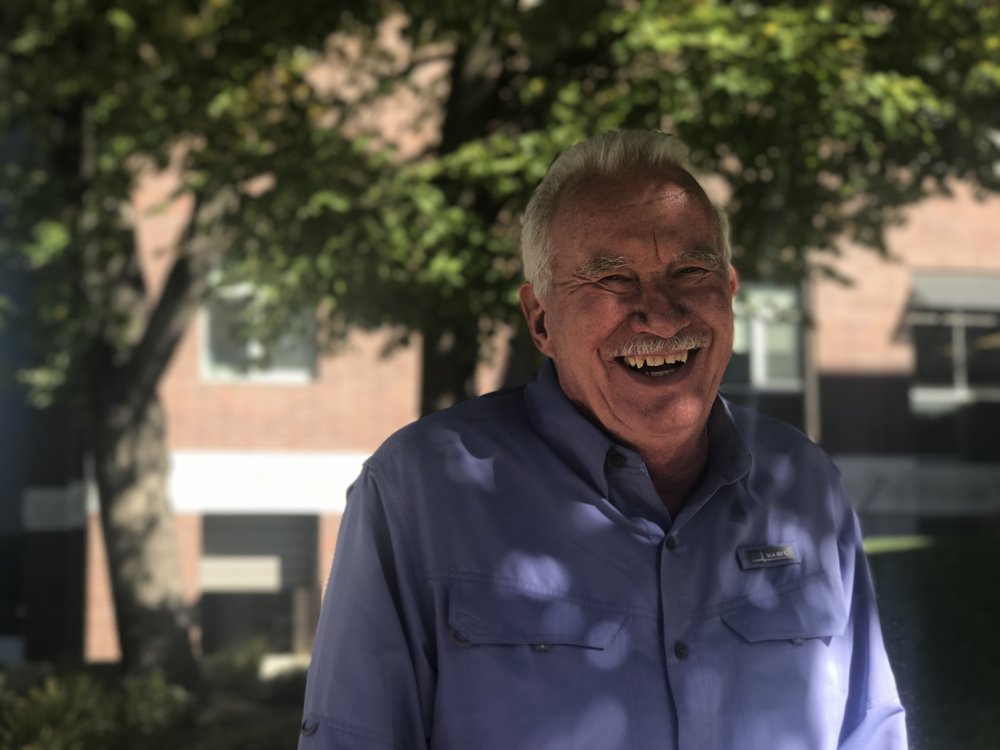 Westminster faculty member Robert Brinkman laughs as he reminisces about his time spent trekking hundreds of miles across Spain on the Camino de Santiago May Term Study Experience trip. Though Brinkman has walked the Camino three times, his experience last year was perhaps the most physically challenging after he injured his arm on second day of the trek. (Photo by Molly Karasick)

Since he began working at Westminster College, 71-year-old faculty member Robert Brinkman has walked hundreds of miles on the Camino de Santiago May Term Study Experience trip three different times. But his experience last year was perhaps the most physically challenging after he injured his arm on the trek.

The French route on the Camino, which is the route the May Term trip follows, is an almost 500 mile trek that begins in Saint-Jean-Pied-de-Port, France, and ends in Santiago, Spain. People have undertaken the pilgrimage for thousands of years and parts of the trail are extremely worn out.

Brinkman fell on a steep concrete trail during his second day of walking on last year’s May Term trip and heard his shoulder snap out of place. Though he could only get about two hours of sleep because of the immense pain, he continued to wake up each morning around 6:30 a.m. to walk for hours.

“It was really remarkable how Robert was able to push through the trek despite his age and the pain he was in,” said Jess Breda, a senior neuroscience major who was on the trip. “There were times I wanted to stop walking, but Robert was always encouraging and could put a smile on our faces to ease the pain no matter what he was going through.”

Despite the injury, Brinkman said he would do the Camino again in a heartbeat.

“If walking through rain, snow and mud and sleeping with 50 or 100 strange people from all over the world all in one big room sounds appealing, then the Camino is obviously your cup of tea,” he said.

The Forum sat down with Brinkman to hear about his experiences in Spain and walking the physically intense Camino with an injured shoulder. His responses have been lightly edited for clarity and conciseness.

Q: What are the physical challenges of walking 10-20 miles daily?

A: It’s hard, even for someone like myself that’s used to hiking through the mountains and enjoys walking. I think a lot of the students that go on the May Term trip to walk the Camino are athletes. They’re in good shape and they handle it pretty well. I think if you enjoy that type of thing the distance doesn’t really bother you so much.

Q: What happened to your shoulder last May Term?

A: I had a little unfortunate accident about the second or third day we walked. I slipped and fell on some concrete; I was on the downhill and it was quite steep. Someone had poured concrete where the trail was then had another board to stop it from running down the hill. I think the idea was to keep it from eroding away.

You get a lot of traffic on the trails because people have been doing this pilgrimage for over 1,000 years. I think the trail in places is quite worn, and it was raining and I had walked down a couple of these and it felt slippery. I was trying to be careful but as I stepped out to take the next step down, the foot that I was standing on slipped out from under me and I reached back to catch myself. As I hit the concrete, I could hear my shoulder tear and it hurt a lot.

I looked around; there was no one there. I was all by myself and so I layed there for a few minutes until I felt like I could try to get up and I got up and walked on. There wasn’t much I could do. I woke up the next day and it looked like some sort of bizarre tattoo artist had gotten ahold of me and from my shoulder down past my elbow was all purple and black and it hurt a lot. It continued to hurt until I got it operated three months later.

Q: Why did you wait so long to get your shoulder operated on?

A: You can’t get into the doctor in Spain. Don’t try it. Take my word for it. I got back the end of May and had to go in and have them look at it and the soonest it could get operated on was the end of July.

Q: How did you continue to walk while you were in so much pain?

A: Walking was easy. It was sleeping I couldn’t do, I couldn’t sleep. I tried all kinds of things — I would lay on my side, put a pillow under my arm, reach up over my head and grab the headboard. Alcohol — alcohol and drugs — didn’t really help. It just really, really ached, I would finally fall asleep around three in the morning and then we’d have to wake up again at six to start walking, so I was tired. The walking was beautiful, though.

Q: Would you do the Camino again?

A: Yeah, of course I would. I would probably pick another route, but I enjoy a good walk. I would find someone or someones that I enjoy their company …  I would definitely do it again in a heartbeat. I didn’t have opportunities like this when I went to college. While you’re here at Westminster, you should take advantage of these May Terms and I would say take advantage of hiking the Camino. When are you going to have, in your young careers, another chance to take a month out of your busy schedule and go see Spain on foot?

Q: What made you want to go on the Spain May Term trip the first time?

A: Ever since I was about 12 years old I wanted to go to Spain and never got the chance. Between college and working I didn’t have the time and / or the extra money … I always enjoyed walking. I enjoy a good walk because it’s a time for introspection, a time to think about your life. And so when I saw the opportunity to not only go to Spain but to walk across Spain, I thought it was just an absolutely, positively fantastic opportunity that would probably only come once in my life. But it actually came three times. I’ve only walked the Camino three times, but if you think about it, that’s quite an accomplishment.

Editor’s note: Reporter Molly Karasick was on the Camino de Santiago May Term Study Experience trip with Brinkman in 2016.