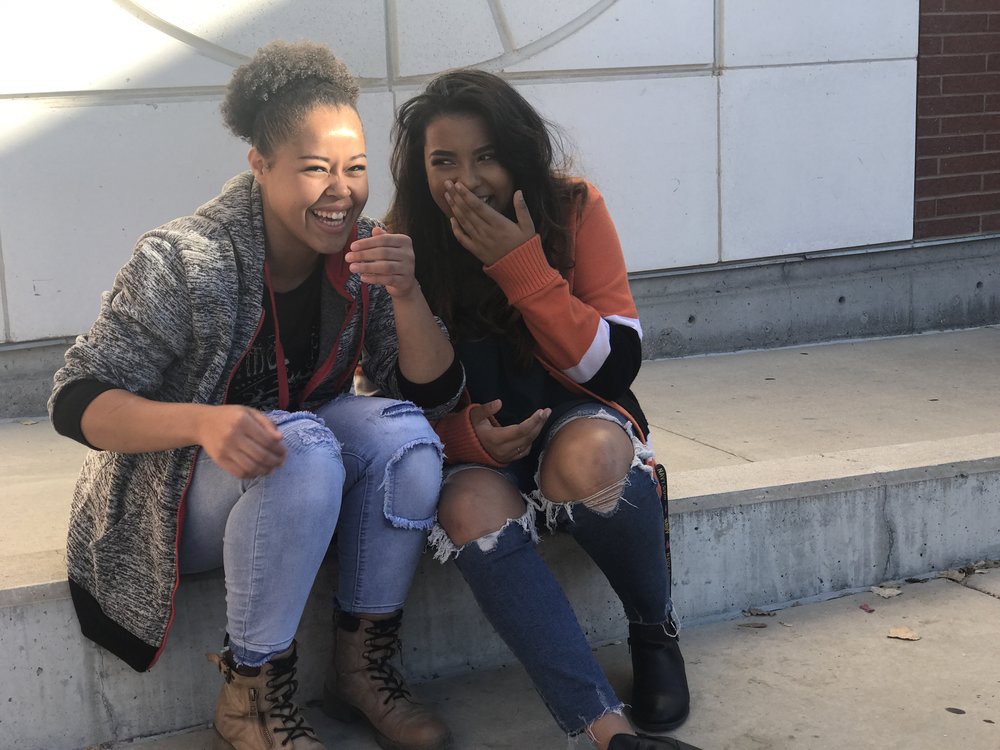 High school seniors Heather Skye Brower-Solomon and Victoria Tixcira discuss what they’ve learned after the Expect the Great event at Westminster College on Saturday, Oct. 28. Westminster hosted the day-long college and career awareness and readiness event for African American and black students this year for the first time since the initiative began in 2011. (Photo by Molly Karasick)

Westminster College hosted a day-long college and career awareness and readiness event on Oct. 28 for African American and black students for the first time since the initiative, Expect the Great, began in 2011.

Tamara Stevenson — an associate professor of communication and faculty fellow of diversity, equity and inclusion — co-chaired the statewide planning committee for the event, which she said was an important step for Westminster.

“It demonstrates the college’s commitment to diversity and inclusive excellence,” she said.

Stevenson said hosting the event is a tangible way for the college to recognize not only the importance of diversity of thought and ideas on campus but also that having people from different backgrounds enriches the learning for all.

There were over 200 participants at Expect the Great, which consisted of speakers, a luncheon and workshops geared toward helping students figure out how to pay for and navigate college and transition to graduate school or a career.

Westminster alumni Pastor France Davis of Calvary Baptist Church started the initiative with the hope that 66 percent of Utah’s population, regardless of race and ethnicity, would have some sort of post-secondary credential and focused specifically on people of color.

Murray High School senior Victoria Tixcira attended the event for the first time and said it positively impacted her to see so many people who want to see communities of people of color excel.

“The workshops taught me where to find my strengths, so I don’t have to spend so much time in college,” she said.

Originally, it was geared toward public institutions in Utah, Stevenson said. As a private institution, Westminster didn’t originally participate in the event but was able to host and attend it after participating on the planning committee for several years.

“The fact that we’re committed to collaborating with the public institutions here in Utah shows our adaptability and flexibility in participating in this governmental initiative to have a more educated citizenry,” Stevenson said.

Roughly 30 percent of black students nationwide are enrolling and attending college, according to the National Center for Education Statistics Enrollments. However, they receive only about 10 percent of bachelor degrees.

Because of this gap between students entering and graduating college, Expect the Great helps students learn about resources and strategies to successfully matriculate and earn their degrees, Stevenson said.

Murray High School senior Heather Skye Brower-Solomon said the event helped her learn the tools she was unfamiliar with about the entire college process.

“When I think of college, I think of extremely smart people,” she said. “Before becoming part of this initiative, I didn’t think I should go to college because I thought I wasn’t going to be good enough.”

Brower-Solomon was just accepted to Westminster and said she is excited to attend next fall.

“There aren’t a whole lot of people of color at Westminster,” Brower-Solomon said. “But when there are, they are all excelling.”