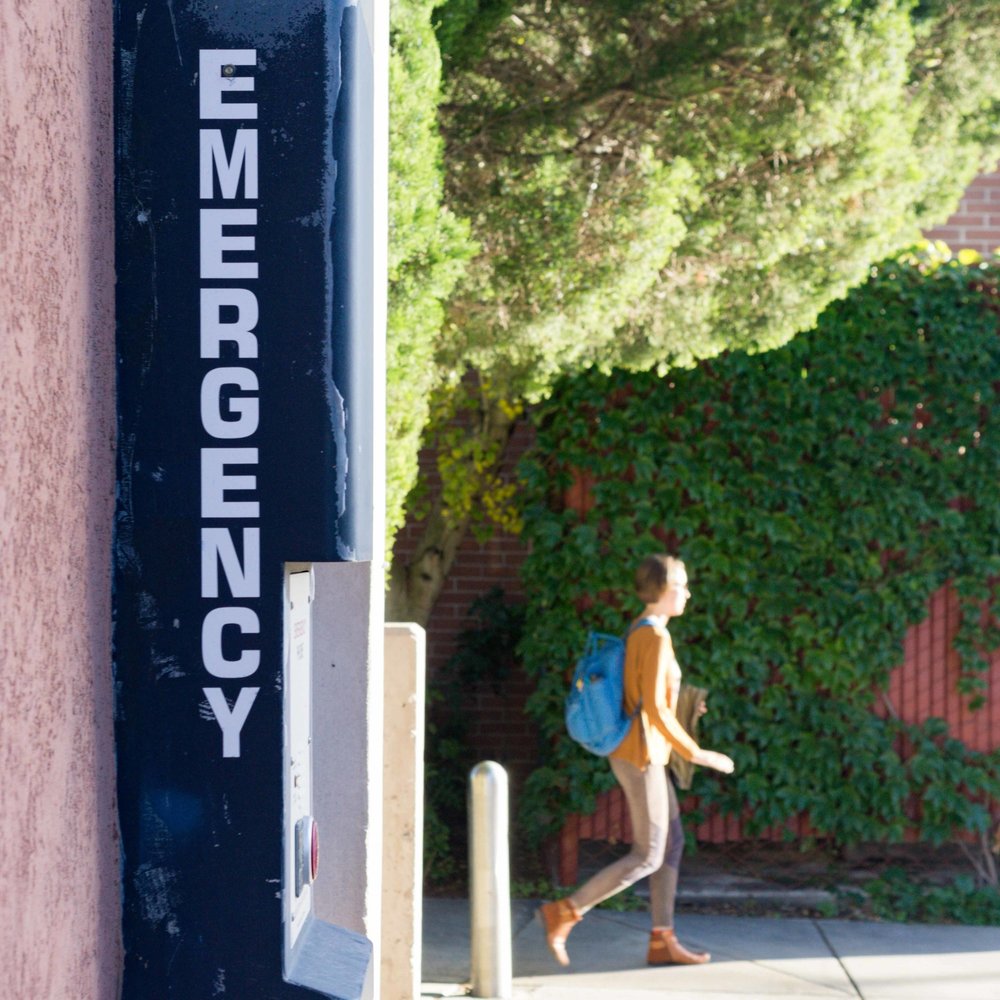 A student walks past a blue light emergency phone behind the Shaw Student Center at Westminster College on Oct. 6. The removal of a key Title IX guideline that required colleges to use the lowest standard of proof has some at Westminster worried the changes will negatively affect survivors of sexual assault. (Photo by Berin Klawiter)

Secretary of Education Betsy DeVos’s recent decision to remove a key Title IX guideline put in place by the Obama administration has some at Westminster College worried the changes will negatively affect survivors of sexual assault.

The biggest change DeVos made on Sept. 22 to Title IX guidelines was removing a rule that required colleges to use the lowest standard of proof, “preponderance of the evidence,” when deciding if an accused student committed sexual assault. Colleges are now free to switch to a higher standard of proof known as “clear and convincing evidence,” according to The New York Times.

Westminster is evaluating the new information and will participate in briefings to better understand these developments, according to college President Steve Morgan in an email sent the day the changes were announced.

“We want to reassure you that Westminster College is dedicated to creating a safe and equitable learning environment for our students,” Morgan said in the email. “Title IX remains law and Westminster College’s commitment to students will never change.”

Though it is still unclear whether the college will change its Title IX policy, some students are worried about the climate the new guidelines would create.

“I think this decision is going to lead a lot of victims to feel unsafe going to Westminster or going to their higher education facilities and reporting this abuse, which is a huge problem because we already have so many victims that don’t report,” said Chloe Moon, a junior Westminster student from New Mexico.

Roughly two out of three sexual assault cases are not reported to the police, according to the Rape, Abuse & Incest National Network (RAINN). Title IX provides students and faculty an alternative option in hopes that more people will report assaults and get the help they need.

The possibility that changes to the Title IX guidelines will make victims less likely to report assaults is just one reason for concern about DeVos’s decision, according to Daniel Cairo, Westminster’s director of student diversity and inclusion.

“Students who are survivors, that’s going to make them feel even more marginalized when we create a culture that says, ‘We don’t care about the experiences of people who are assaulted on college campuses,’” he said.

Additionally, Cairo said the changes may make the issue of sexual assault even less visible on college campuses.

“It also creates a culture where it tells the rest of the campus that’s not an issue that matters or that even exists,” he said. “And that’s really problematic, because we know that these issues exist.”

When the Department of Education announced the changes to Title IX, it issued a statement that said the old rules “lacked basic elements of fairness.”

Though some people have said they agree with this because they believe Title IX strips accused students of their right to due process, which is guaranteed by the Bill of Rights, Cairo said that isn’t the case.

“The way Betsy DeVos is framing it is that we’ve never cared about people who are accused, and that’s actually false,” he said. “I’ve sat in a lot of meetings [and] we’re always thinking about the due process of people who’ve been accused.”

This decision and belief that the old rules were unfair comes from the fear that people won’t be able to defend themselves against false allegations, Cairo said.

Though some may have a perception that false allegations of sexual assault happen frequently, research and statistics have shown this isn’t the case. One study called “False Allegations of Sexual Assault: An Analysis of Ten Years of Reported Cases” found only 5.9 percent of cases of sexual assault out of 136 were determined to be false.

“These results, taken in the context of an examination of previous research, indicate that the prevalence of false allegations is between 2 percent and 10 percent,” the study stated.

This percentage becomes even smaller when factoring in unreported assaults.

“We know that false accusations are actually not a thing and when [people] say they’re a thing, they’re talking about cases that were inconclusive,” Cairo said. “If they’re inconclusive, the cases don’t go anywhere and they file those under the falsely accused. So those are some of the numbers we’re wrestling with and that people are drawing from.”