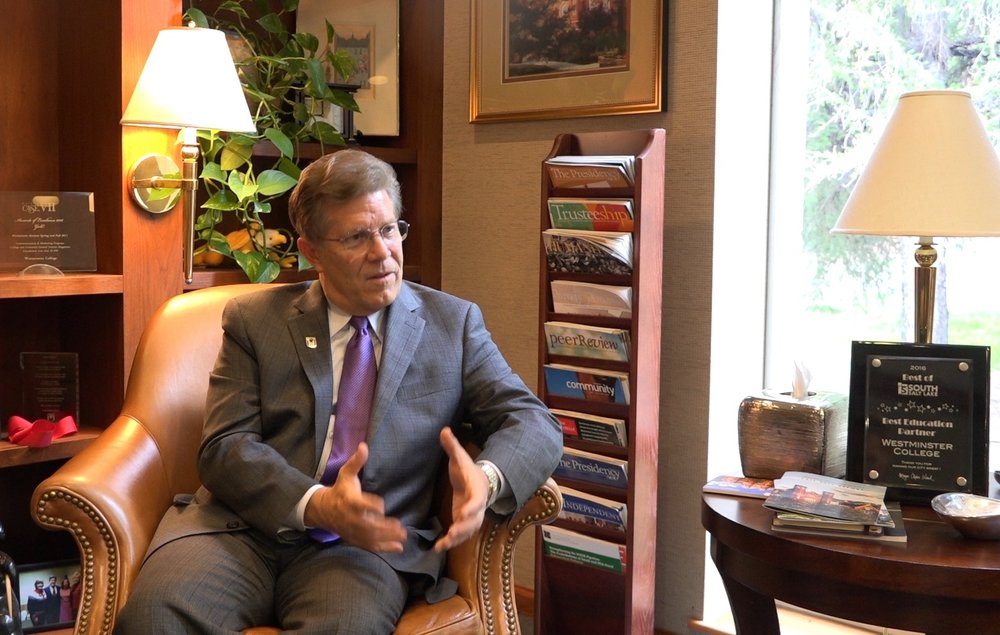 Westminster College President Steve Morgan reflects upon his 37 years at Westminster. As Morgan prepares to retire from Westminster, he said he has a different perspective on diversity issues than he did when he started as president in 2015. (Photo by Berin Klawiter)

Just months after Westminster College President Steve Morgan’s inauguration in 2015, students taped their mouths shut and brought x’ed out copies of The Forum to a faculty meeting to protest statements from administration about diversity.

Now, as Morgan prepares to retire from Westminster after 37 years, he said he has a different perspective on the issues surrounding diversity — forcing him out of his comfort zone and teaching him a lot about himself.

“Over my experience here, my thinking has matured,” he said, noting the addition of his personal pronouns to his email signature as one such example of change. “It has been very affected by the community we have.”

A member of Generation X, a white male and a member of the Utah’s dominant religion, The Church of Jesus Christ of Latter-day Saints, Morgan said he has faced challenges in communicating to students who come from marginalized groups. However, he said he strongly believes in moving the college’s diversity efforts forward.

ASW President Ben Pok said one of Morgan’s most important attributes as president has been his ability to listen to students and their requests.

“A crucial moment was last academic year when the sanctuary campus petition came out to protect undocumented students,” Pok said. “Our president issued a statement saying, ‘We are a safe haven campus and will protect our students.’”

Morgan said Westminster is more diverse than when he began 37 years ago and has seen the college act on its commitments to help every student feel safe and welcome.

“Recognizing challenges that students have or the opportunities some have that others don’t has made me really think about what can we do as an institution to feel like a community,” he said.

With the recent repeal of the Deferred Action for Childhood Arrivals program (DACA), which provides protections for those who were illegally brought to the United States as children, Morgan said he wouldn’t have thought about its importance before working at Westminster but changed his perspective after working in a community with people advocating for equality.

“I will use my position as president to advocate along with other presidents to our local legislatures how important it is to protect our students,” he said.

Morgan said he believes that supporting not only DACA students but also international students, transgender students and others facing marginalization is an important factor in creating a diverse community.

“I’ve seen President Morgan wrestling with concepts or ideas because he’s trying to be a better leader,” said Daniel Cairo, the director of Westminster’s Student Diversity and Inclusion Center. “You don’t get to see that often.”

Cairo said one challenge for moving the diversity effort forward at Westminster is the impact the political state of the country has on the school’s efforts.

“Adding everything contentious that is happening in the country into our efforts in creating an inclusive campus becomes a challenge,” he said.

Despite the challenges, Cairo said Westminster’s diversity efforts are dedicated to making sure all students have the chance to succeed.

Morgan said he believes it’s important to set an example for the Westminster community when advocating for diversity and inclusion.

Though Morgan will retire as president next May, he said he is not retiring from his relationship with Westminster —he will be involved in some capacity.

“I hope Westminster always tries to be tolerant with one another and continues to practice citizenship and civility,” he said.