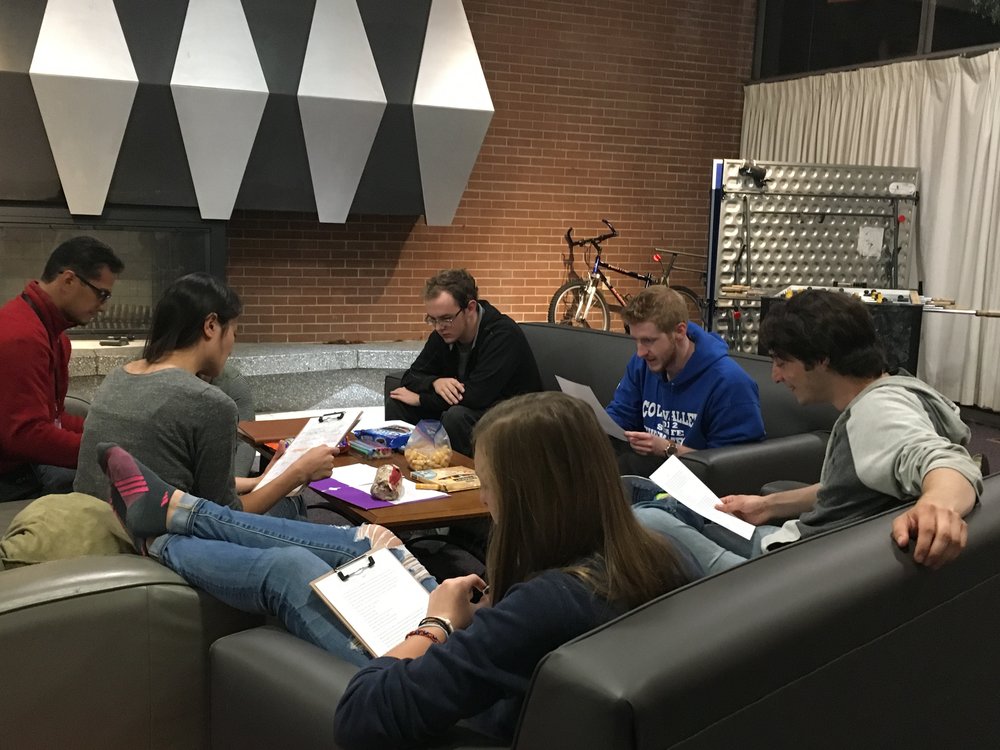 Members of InterVarsity, a new religious group at Westminster College, meet in the lounge in Hogle Hall for Bible Study. Some students with conservative political or religious views at Westminster said they feel somewhat constrained in their beliefs and said more liberal students’ reactions to their views may lead them to self-censorship. (Photo by Hasib Hussainzada)

Editor’s note: InterVarsity is a non-partisan religious group on campus.

When Daniel Pacheco, a religious studies major at the University of Utah, started his first year at Westminster College in 2015, he said he didn’t feel he could openly express his conservative beliefs.

“Most college campuses are pretty liberal, so if you have any conservative views, you just have to be kind of be careful about what you say,” Pacheco said.

Westminster strives to promote inclusion through discussions on issues like power, privilege and social engagement, according to the college’s Diversity and Inclusion Center. But some conservative students on campus said they feel somewhat constrained in their beliefs.

“The feeling you get is just kind of like as if you are not allowed to talk about [conservative viewpoints],” said Pacheco, a member of the religious group InterVarsity at the University of Utah. “But I don’t think there are any super negative repercussions to saying that you are conservative or republican.”

Though Pacheco said his views have never been shut down on campus, he said one of his professors shut down a conservative religious student in class because “the teacher wasn’t going to listen to political or religious ranting.”

“[There’s] just a feeling, primarily from a false perception of the college life, that being religious isn’t okay,” he said.

Westminster is a private college, meaning students on campus have no constitutionally-mandated free speech rights. However, the student handbook does provide freedom of expression, recognizing that “uncensored speech – which does not include a right to harass, injure, or silence others – is essential in an academic community.”

Overall, Pacheco said Westminster as as an institution doesn’t intentionally restrict opinions on either side. However, he said students’ reactions to conservative ideas may lead those students to self-censor.

“I don’t think the college campus itself can be close-minded, but I think some students might be,” he said. “The college itself is open to what you bring, and I think it’s more students that can make it feel that way.”

Madison Alleman, a theater major at Westminster, said people on campus don’t lash out when they hear views they disagree with but noted some views are criticized.

“[Conservative students] might feel that their ideas are unwelcome, when in fact their ideas are mainly just challenged or questioned,” she said. “That makes them feel threatened or unwelcomed because essentially they might be resisting taking a critical lens to what they believe.”

Alleman, who said she believes students are entitled to their beliefs, also said there should be some kind of retaliation if someone openly shares racist, sexist or dehumanizing views. It’s inappropriate for someone’s racist views to go unchallenged and people aren’t entitled to dehumanize or degrade others, she said.

“A lot of times when you get that intersection of religious beliefs and people of certain religions being afraid to speak out, I feel like that generally means they’re afraid of retaliation for their views on the LGBTQ community or their views on women — particularly feminism in pro-choice movements,” Alleman said.

Some students said they have faced hostility at times on campus when expressing their conservative religious or political views.

Ryan Kruger, a finance major and a member of InterVarsity, a new religious group at Westminster, said people with opposing viewpoints aren’t communicating well with each other at the college or in the government.

“A week onto campus, somebody called me sexist just because I said I didn’t support Hillary Clinton,” he said.

Though he said some people do a good job of being inclusive, Kruger said he has felt tension on campus from time to time. He said there are groups who only have “their type of diversity,” which exclude those who think differently.

“There’s a lot of talks on these campuses about white privilege and white males are suppressing people in society,” he said. “I think a lot of that stuff is really just blown out of proportion.”

He said people are so politically charged they forget what’s important.

“Presidents come and go… you are going to like some, you’re going to hate some,” Kruger said. “At the end of the day, I don’t personally care because I love living in this country, and it’s a privilege to live in this country.”

“More education and conversations will allow our campus to have more opportunities to learn and broaden our understanding, while practicing the art of learning, listening, and responding, or often referred to as appreciative inquiry,” Barker told The Forum in an email.

Faculty, staff and students are all represented in Westminster’s definition of diversity, Barker said, and the college is comprised of members of different political ideologies and religious and spiritual practices and outlooks.

Politics and religion are also part of the educational enterprise, Barker said.

But some students, like education major Monet Nielsen, said they have not seen tension surrounding these issues on campus.

“[In classes] I have taken, we generally don’t talk about politics or religion,” she said.

If professors talk about those topics in her classes, Nielsen said they present the information in a neutral way by playing devil’s advocate and showing the strengths and weakness of all sides.

However, Nielsen said there is always a risk of encountering close-minded people when students talk about religion or politics.

“I think anywhere where there is a lack of diversity in opinions, any interaction between those with opposing views carries a higher risk of close-mindedness,” she said.