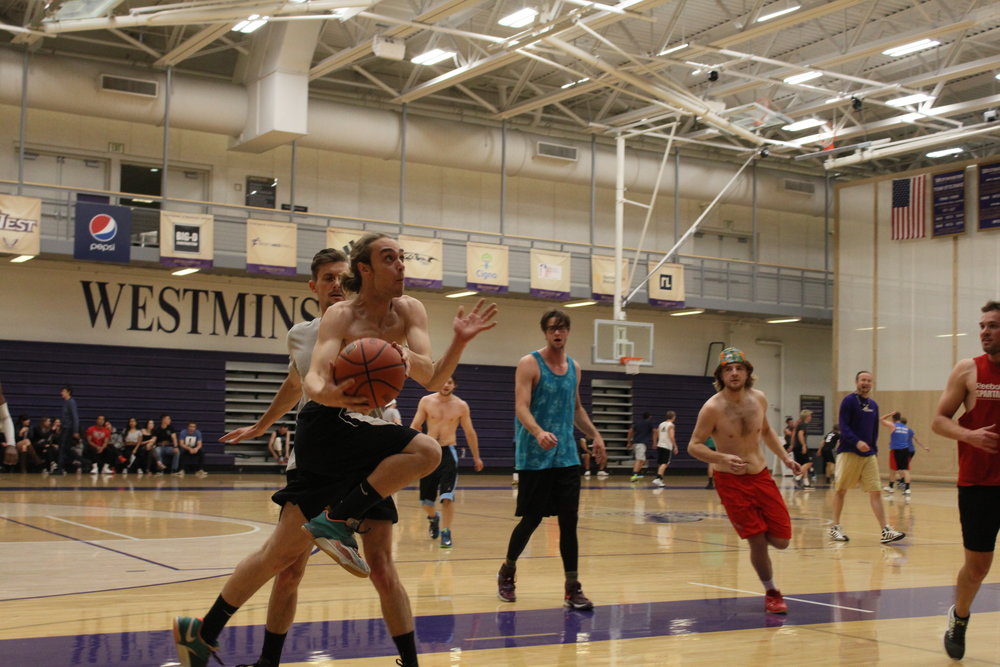 Students at Westminster College play an intramural basketball game in the Health, Wellness and Athletic Center (HWAC) on Nov. 13. Most intramural teams have a faculty and staff team, which can offer students a unique way to build relationships with them outside the classroom. (Photo by Hasib Hussainzada)

For some students at Westminster College, intramural sports aren’t just a way to have fun and develop new skills — they’re also a chance to build relationships with faculty and staff outside the classroom.

Jack Maddox, a junior physics major who played lacrosse in high school, said he participates in intramurals at IM Leagues to play sports he wouldn’t otherwise.

“I’ve always been a really athletic person, so intramurals is a way to be athletic,” said Maddox, who plays intramural basketball. “It’s a way to play sports that you like but not have to do the commitment of college level sports.”

“The most interesting thing is how good the faculty team is,” he said. “I don’t quite understand it. They pretty much rule everyone. A lot of people do [say] like tongue-in-cheek comments at them — like maybe they should be working instead of playing. I think most people are just salty because they lose to them and they are all like 30 and 40 [years old].”

Students at Westminster College play an intramural basketball game in the Health, Wellness and Athletic Center (HWAC) on Nov. 13. Most intramural teams have a faculty and staff team, which can offer students a unique way to build relationships with them outside the classroom. (Photo by Hasib Hussainzada)

Wallace, who has played intramurals all four years he’s worked at Westminster, laughed at Maddox’s comments about how “salty” students are toward the winning faculty members.

“If students are talking about it, it that means they’re having a good time,” he said. “Are they frustrated? I’m sure, but that just means that they are going to come and play harder next time. It will be a better challenge or a better game.”

Wallace said he thinks it’s tough to play against students as a faculty member because there is extra competitiveness. He said bad calls or someone accidentally fouling and hitting him sometimes makes him want to snap — but he always thinks about how it could affect his job.

“I always try to keep in mind that I may have to interact with [students] tomorrow,” Wallace said. “And if I have a terrible interaction with them the night before intramurals, that’s not exactly a positive relationship the next day when they come in my office to utilize me as a resource.”

Wallace said he thinks more staff and faculty members should participate in intramural sports because the casual, fun atmosphere helps change the dynamic they have with their students.

Laura Iverson-Bastiani, the assistant director of fitness, wellness and recreation at Westminster, said most intramural sports have a faculty and staff team, which can positively impact both them and their students.

“I think [intramurals are] a great opportunity for faculty and staff to interact with students outside the classroom,” she said in an email. “I also think it’s really important for staff and faculty to model healthy behaviors for students.”