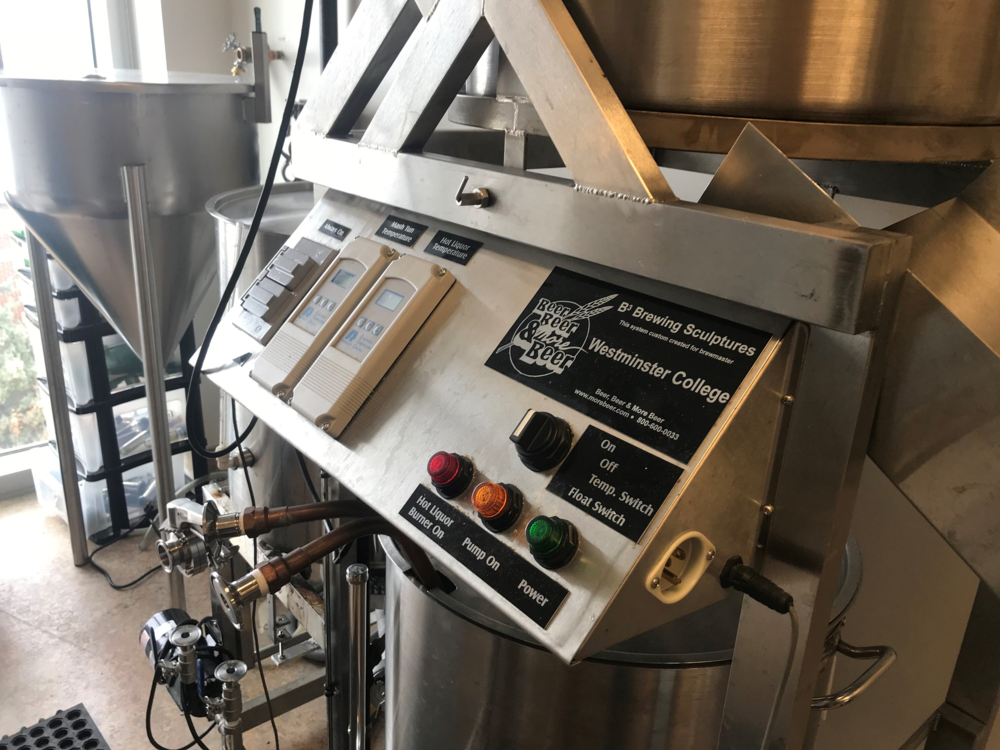 Brewing kettle controls, which allow for precise temperature control during the beer brewing process, sit in the food science lab in the Meldrum Science Center at Westminster College. Will Deutschman, a chemistry professor, began conducting beer studies at the college when the center first opened and currently has two students conducting independent research projects under him. (Photo by Charles Harder)

Beer. For many it’s a means of intoxication, for some it’s an art form — and for others, it’s a path to a future career in research.

Will Deutschman, a chemistry professor at Westminster College, said he is, for all intents and purposes, a beer enthusiast.

He’s also a beer researcher and began conducting studies at Westminster when the Meldrum Science Center first opened. It wasn’t long before he realized how similar biochemistry was to brewing.

“I dropped my classical biochemistry research stuff and switched over to brewing science,” Deutschman said.

His hobby started 25 years ago, when he began brewing beer after graduating college.

“It’s a process, like a sculptor would go through,” he said. “They have an idea of what they’re going to come out with at the end — most of the time — but in the middle of it, things change, go sideways [and] you get new ideas. Just being able to play creatively, that’s what I really like.”

At the moment, Deutschman has two students conducting independent research projects under him: Bobby Bruggeman, a junior chemistry student with a business degree, and Sam Dulski, a senior neuroscience major studying pre-med.

Bruggeman and Dulski are doing projects based on serial re-pitching yeast, which is when the same yeast is used again and again through several generations of beer. Serial re-pitching is a technique that many breweries, small and large, use to save money.

Bruggeman is researching the effects of off-flavor alcohols in serial re-pitching. Although ethanol, the stuff that gets someone drunk, is the primary alcohol yeast produces, the yeast also produces small amounts of heavier types of alcohols that can contribute to off flavors such as sour apple, horse blanket, corn and many others, Bruggeman said.

Inspired by his research, Bruggeman started brewing his first batch of beer at home two or three months ago.

Indeed, sanitation is the most important part of about brewing beer. The book How to Brew, which seems to be more or less the Holy Bible of brewing, has an entire chapter on sanitation and cleaning, the importance of which is reiterated throughout the rest of the book.

“If you want to talk about the most superstitious people about sanitation, walk into a brewery,” Deutschman said. “Their equipment is beautiful, always, because it’s so important.”

In order to make the yeast thrive, fermenters are kept at the perfect temperature for bacterial growth. If there is contamination, then that bacteria will dramatically change the flavor of the beer, Bruggeman said.

Dulski, on the other hand, is researching the sugar content in beer after serial re-pitching yeast. At the World Brewing Conference, a group of researchers presented findings that yeast becomes more efficient as it gets older through serial re-pitching, which changes the level of residual sugar in the beer over time.

“We used the same yeast over and over again and kept brewing with that,” Dulski said of his research. “We were checking to see how healthy the yeast is.”

He presented at the Master Brewers Association of the Americas in Atlanta but said he didn’t see any change in the yeast’s efficiency.

Though his research is finished and he won’t be able to work on more projects with Deutschman if he wants to graduate on time, Dulski said he plans to continue brewing.

“I’m always going to have a homebrew set,” he said.

These students’ work with Deutschman has turned into a potentially lifelong hobby.  Both said brewing beer combines their passions for science with something they love doing in their free time.

“It’s so easy just to go to the liquor store and buy beer and drink it, but it means so much more and has so much more value when you actually create it [and] go through the struggle and the process of waiting like a month and a half before you can try it,” Bruggeman said.