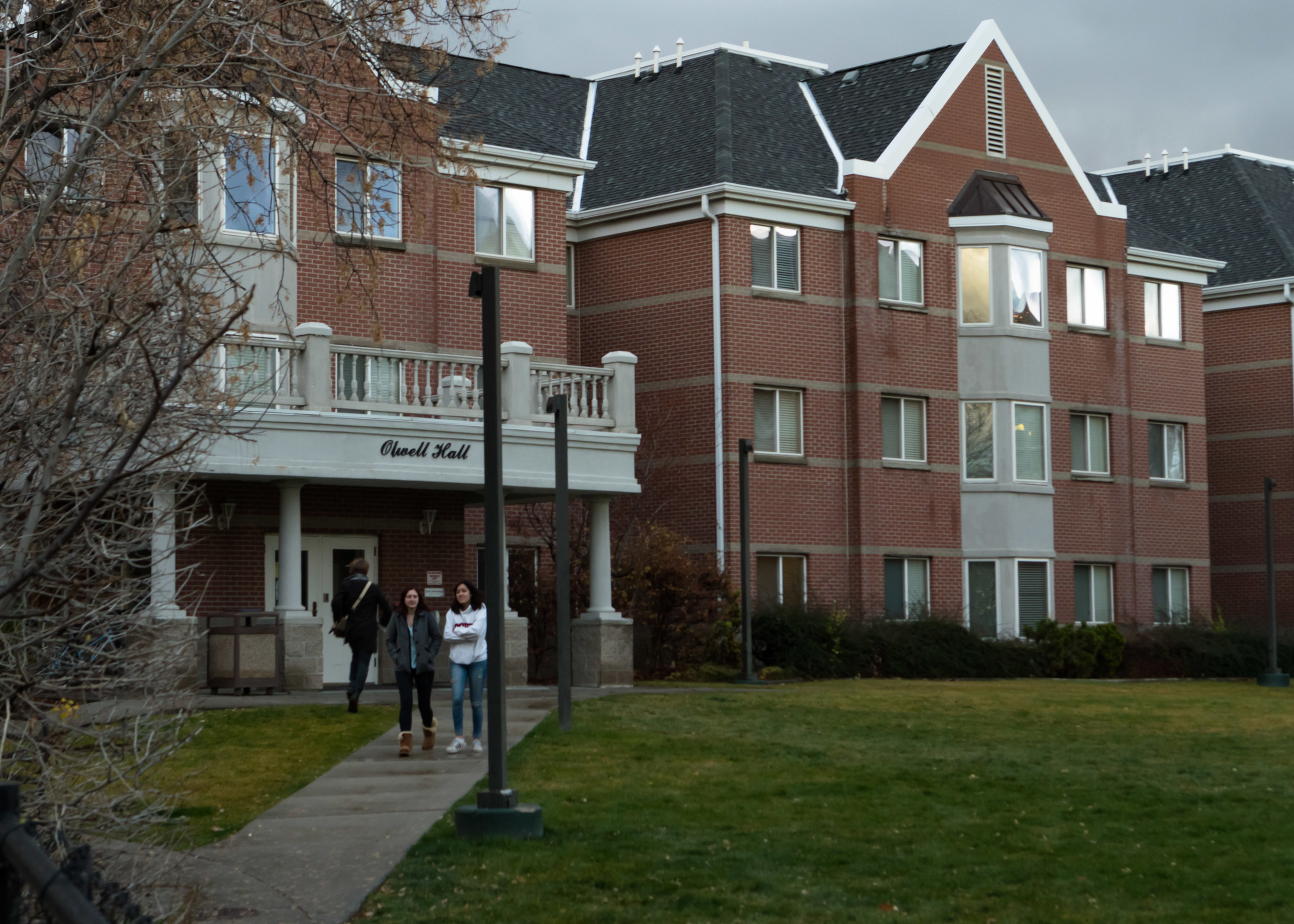 Students walk past Olwell Hall, one of the school’s five dorms located on campus at Westminster College, on Nov. 17. Like many institutions of higher education, Westminster requires students to live on campus their first and second years, citing research that shows living on campus helps students maintain better grades and transition more easily to college.  (Photo by Berin Klawiter)

Like many institutions of higher education, Westminster College requires students to live on campus their first and second years, citing research that doing so may help them maintain better grades and transition more easily to college.

However, not every student wants to live on campus. To get out of the requirement, they have to fill out a Housing Exemption form. For many, the process works great — but others said they think it should be easier.

Will Reuland, a senior accounting major, said it took months of back and forth with the school, four essays and hours of community service to get out of the requirement to live on campus his second year.

“I wrote a letter saying that I was going to be living with a relative,” he said. “After a couple weeks, they wrote me back saying they knew I wasn’t going to be living with a relative and I was in big trouble for lying to the school. I went into the office and talked to the person in charge and said ‘I’m really sorry about lying on the form; I should have just put down that it was a financial issue.’ They had me write another essay about why it was a financial issue and I had to do a bunch of community service to make up for lying, then I had to write another essay about what the community service taught me.”

For Annie Vreeke, a public health major from Cottonwood Heights, the process was much simpler.

“My parents and I signed a form and that was it,” she said in a message to The Forum.

Collin Wallace, the director of residence life at Westminster, said there are a number of reasons for the school’s rules surrounding the two-year housing requirement.

“Westminster put in a two year live on requirement a number of years ago based on research relating to student success,” he wrote in an email. “Research supports that students who live on campus have higher grade point averages, are more involved and connected to campus and its resources, they make more peer connections, and ultimately are invested more into the institution they are attending.”

But Jessica Rubin, an arts administration major from Illinois, said living on campus was a nightmare.

“I had such a horrible experience my first year with my roommates, that I knew I couldn’t handle getting assigned random roommates again,” Rubin wrote in a message to The Forum. “I didn’t know anybody who had free space in their dorm apartments, so I couldn’t move in with people that I knew.”

Eventually, the school waived her requirement.

Because research shows living on campus makes students more likely to succeed and helps build a strong campus community, the school has few exceptions to the rule.

“Exemptions to our two-year residency requirement will be considered for students over 21 years of age; military or veteran status; married, domestically partnered, and/or with legally dependent children; independent student status; medical and disability circumstances; or other special circumstances which create substantial personal hardship,” according to Westminster’s website.

But sometimes, students who struggle to get an exemption from the housing requirement give the school an ultimatum to get their way.

“Basically, my parents and I said, ‘I won’t come back to Westminster if you don’t waive the fee for breaking the contract and let me live off campus,’” said Alex Higgins, a senior from Ithaca, New York. “My parents pay for housing, but they couldn’t do $800 a month. Their financials look fine but I have two younger siblings who are both involved in ski programs and stuff like that, and they can’t afford it all.”

The college eventually waived the fee and allowed Higgins an exemption from the second-year housing requirement.

Correction on Nov. 29 at 2:00 p.m.: A previous version of this article incorrectly identified senior Alex Higgins’s hometown. He is from Ithaca, New York.