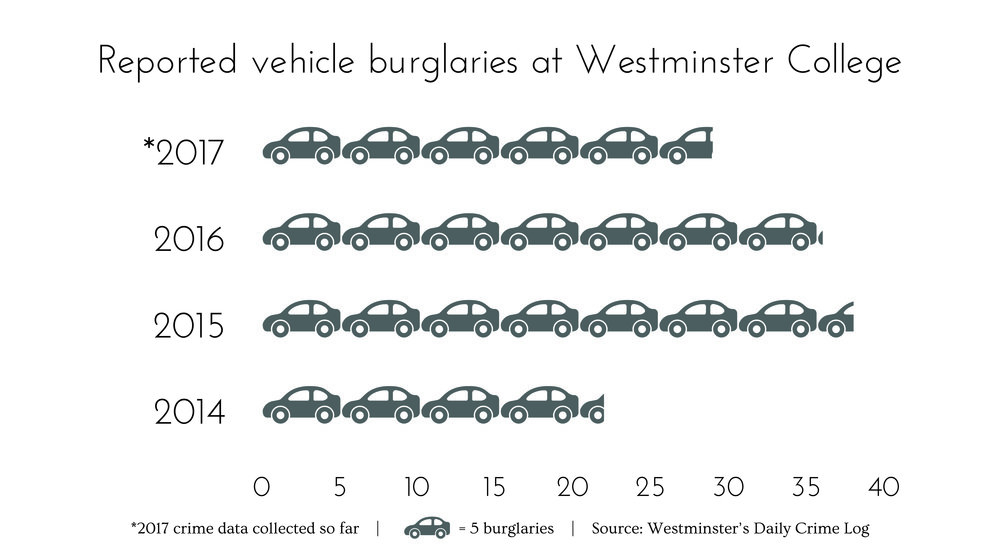 There were 36 reported vehicle burglaries at Westminster College in 2016 — the second-most common crime reported, with drug and liquor law violations first, according to campus crime reports.There were 22 break-ins in 2014, 38 in 2015 and 29 so far in 2017, according to Tony Russell, Westminster’s director of campus security. (Photo by Jesse Cervantes)

When Grant Phillips, a junior international business major, returned from his 2017 May Term Study Experience class in Colombia, he found a broken car window and at least $1,000 worth of stolen equipment.

“I thought I took every precaution I could,” Phillips said.

But he’d forgotten to cover his set of 15-inch subwoofers in the back of the car — which was parked at the college’s off-campus apartment complex Westminster on the Draw — with a blanket before leaving on his trip.

“I saw the glass and I peeked in and saw that [the subwoofers] were missing, and I just sat there with my hands on my head for probably 10 minutes,” Phillips said. “It was rough. It was terrible.”

There were 36 reported vehicle burglaries at Westminster College in 2016 — the second-most common crime reported, with drug and liquor law violations first, according to campus crime reports released annually on Oct. 1 as part of the federal Clery Act.

Campus security is working on ways to abate the issue, Russell said, but vehicle burglary is a difficult crime to prevent because it’s quick and there doesn’t seem to be a particular time of day burglars strike.

“You can get hit anywhere,” he said. “There is no rhyme or reason.”

Russell has been working on increasing surveillance in the Westminster parking lots and putting in new security cameras — as well as hiring off-duty police officers, in addition to the seven campus security officers, to patrol the parking lots at night. The college also recently installed four new security cameras on the upper levels of the parking structure at Westminster on the Draw.

“In October we haven’t had one car problem,” he said. However, he noted it’s still too soon to tell whether that’s because of the new security measures.

There were 19 cases of vehicle burglary in the Draw parking structure alone in 2016, according to Westminster’s Daily Crime Log. Of those cases, 16 were below the security gate, which is not managed by Westminster and therefore is not patrolled by campus security.

There are several things students and faculty can do to keep from becoming victims, Russell said. He suggested parking in well-lit areas and not leaving anything in the car.

“That helps minimize it, but we’ve had a lot of cars where the windows were broken and nothing’s taken out of it,” he said.

For those dealing with a vehicle break in, Russell said it’s important to immediately contact police or campus security.

“If something gets stolen, about the only way you’re going to get it back is if the police have a report of it,” he said. “If someone tries to pawn it and [the victim has] done a police report, then it pops up.”

Russell also said submitting a report to the Salt Lake City Police Department helps that agency understand where and what the issue is. Given the department’s greater resources, it has a greater ability to address issues like vehicle burglary, he said.

The best thing someone can do if they witness someone breaking into their car is to get a good description of the person. Even better is a license plate number if the suspect has a car, Russell said.

Still, there’s no guarantee someone will get their stolen stuff back.

Tristan Palola, a fourth-year Spanish and Latin American studies major, had his car broken into in the Stock parking lot in the spring of 2015 during his first year at Westminster. He lost some money and a pair of skis.

“It’s really common for those who ski and do those kinds of things to roll back up to where they’re living and not want to clear out their car because they’re just tired,” Palola said. “Take everything out of your car. It will take an extra five minutes, but certainly do it because it’s not worth going through that.”

Palola filed a formal report with campus security but was never able to get his skis back.

“Those skis were long gone by the time I could do anything about it,” he said.

Palola said he feels naïve for leaving the skis in his car. Although he said he blames himself for it, he wished the issue had been addressed more when he was a first-year student.

“During orientation, we were kind of sold this notion that parking your stuff in Stock was safe and that with campus patrol your cars weren’t going to get broken into,” he said. “That’s just not the case.”