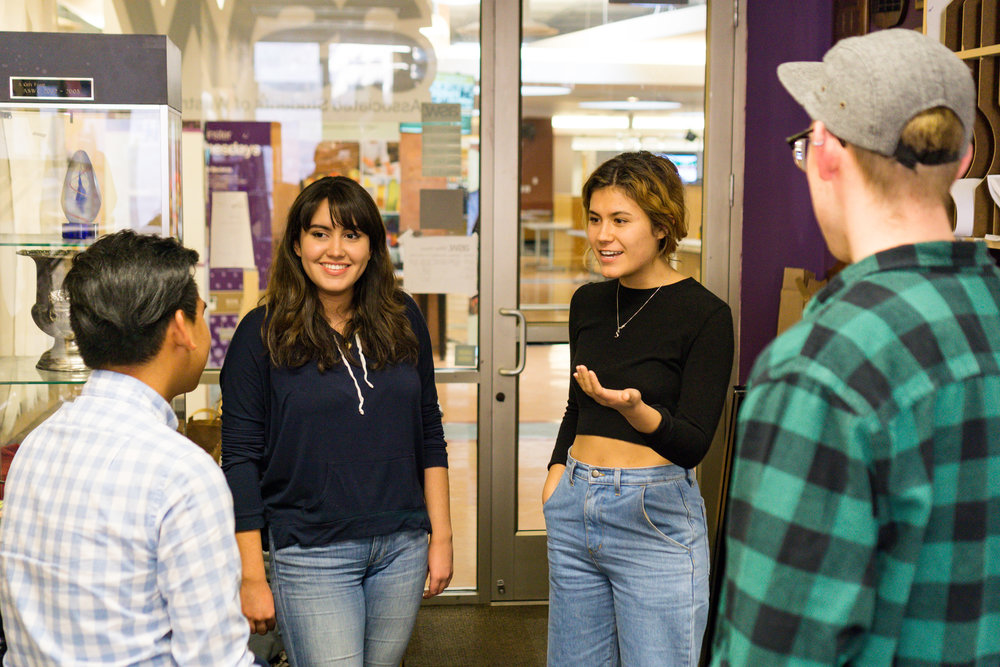 ASW President Ben Pok (left) and ASW Vice President Sabi Lowder (second from the right) speak to students in the ASW Office in the Shaw Student Center on Oct. 11. Pok and Lowder are advocating for the creation of a women’s center on campus and said they are hopeful their new process to create a women’s center will work this time. (Photo by Berin Klawiter)

After an initiative to create a women’s center at Westminster College failed in 2015, student leaders are again pushing for a space on campus to provide more support for survivors of sexual violence.

“We’ve constantly been fighting for space at this institution as far as with the diversity center,” said Ocean Candler, president of Westminster’s Students for Choice club and a junior public health major. “I think that as an institution — as many other institutions have this problem — they have a problem with fostering a safe space for marginalized people. I think that having the women’s center will help.”

One in five women will experience sexual violence while in college, according to the National Sexual Violence Resource Center, and more than 90 percent of victims never report.

“I wanted to have a space on campus for a gender equity center,” Jerman told The Forum in 2015. “But after talking with administration and everybody, they were kind of like ‘no,’ but that’s okay because the space I originally wanted to use is going to the new military and veteran center, which is really awesome. But overall, this year on campus there’s going to be a big push for making it safe for women.”

Her push was ultimately unsuccessful. But Pok and Lowder said they are hopeful their new process to create a women’s center will work this time.

“One thing we’ve come to understand is that ASW and the students in general shouldn’t be [held] responsible for the financial aspects [of creating a women’s center] or anything like that,” said Pok, a junior political science major. “Us working on creating one was beyond our scope.”

Those pushing for a women’s center said it wouldn’t be only for female-identifying students.

“We also do want to focus with the women’s center that it’s inclusive, so we’d have LGBTQ+ resources,” said Lowder, a junior custom major. “[There would also be] a focus on sexual assault victim advocacy.”

Candler said she believes the creation of a women’s center is feasible and that other Westminster community members would also be interested in helping.

“Most universities have an LGBTQ resource center, a women’s center and then a student health center,” Candler said. “I was like, ‘We don’t have the capacity to offer all that,’ but I don’t think that we should limit ourselves to that idea. I know that this is something that Feminist Club would want to be involved in and the V-Day Club and the Diversity and Inclusion Center.”

Candler said she believes there are resources for a women’s center everywhere — and as many reasons one is needed.