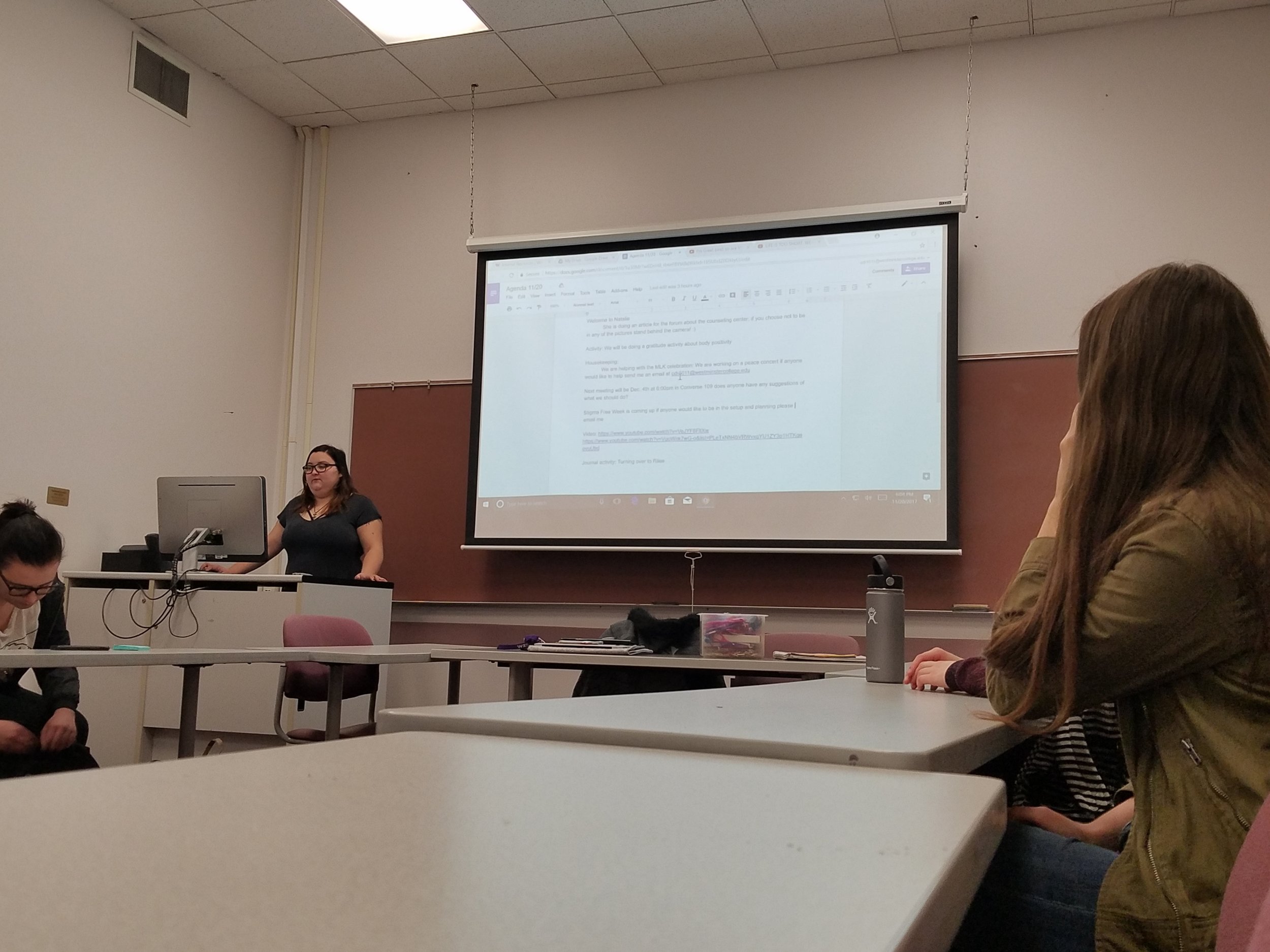 Chloe Roghaar, president of the National Alliance on Mental Illness (NAMI) club at Westminster College, introduces the activities planned for its meeting on Nov. 17 at 6 p.m. in Converse Hall. Roghaar, a senior public major, said she wants students to think of the mental health advocacy group as another resource outside the Counseling Center, which has wait times of up to a four weeks. (Photo by Nicole Balmforth)

Westminster College has 2,800 students, and those seeking counseling services with one of the three counselors may face up to a four-week wait before they can schedule an appointment.

The Counseling Center’s worst wait times are generally only during the mid-semester peak with midterm stress, according to Lisa Jones, the center’s director. But during the rest of the school year, the average wait time for an appointment is still longer than a week.

“As the semester goes on, as we’ve already been seeing clients and then new people are continuing to come in, we don’t have as many open slots,” Jones said. “It could be anywhere from one day — if there is a cancellation — and worst case it could be about four weeks. Average might be two weeks.”

Nicole Tyler, a senior English major who has been involved with the National Alliance on Mental Illness (NAMI) club since its inception at Westminster, said the long wait times could be attributed to unrealistic expectations for the college’s counselors.

“The fact that [students] are waiting two to three weeks for initial intake appointments is ridiculous,” Tyler said. “We have three and a half people who are there. They have regular clients that they take in normally, they are also supposed to be doing wellness support groups and then there is also crisis counseling. How do you fit all that [into] a nine-to-five day?”

But students at Westminster, which meets the national recommended student-to-therapist ratio, likely fare better than those at other Utah institutions. Utah Valley University, Utah State University and the University of Utah are all stretched to capacity, with ratios far above the recommendation of one full-time therapist per 1,000 to 1,500 students, according to The Salt Lake Tribune.

Tyler began using the Counseling Center after starting at Westminster, when the academic stress became overwhelming. With the assistance of a professor, Tyler was able to receive services immediately.

“I think it’s important to acknowledge the work that the Counseling Center does,” Tyler said. “I know personally without them I wouldn’t be in the places that I am. [The Counseling Center helped] uncover a lot of roots to things that I was overwhelmed about and be like, ‘Okay, this is where this is stemming from.’”

Many students on campus seek the Counseling Center for help for their mental health, which Jones said is one of the top five reasons she sees clients.

“Pretty consistently every year, every semester, there is a top five that are always the same,” said Jones, who has been working at the college for 10 years. “Those are currently in the order of anxiety, stress, depression and sometimes those three flip-flop around. The last few years it’s anxiety and stress — definitely anxiety. Then, academic concerns or problems and relationship concerns or problems.”

Chloe Roghaar, the president of Westminster’s NAMI club, said she wants students to think of the mental health advocacy group as another resource outside the Counseling Center.

“I know personally it’s a struggle — especially when you feel like you need to get [a counseling appointment] right now and it’s really difficult and frustrating to feel like ‘I need this session and I’m not having access to it,’” said Roghaar, a senior public health major. “‘I need to wait a few more weeks, and my entire demeanor might change and my entire situation might change.’ It’s like this crazy obstacle that’s really difficult to get around, but I also feel like it’s not uncommon.”

Jones said most students seek out counseling when they’re stressed, have reached a breaking point and want to feel better.

“[Students] are like, ‘Okay, I got to do something,’ and so of course they are wanting to get in right away,” Jones said. “I think the effect is that it can be difficult and a little bit disappointing when they have to wait. Some people understand that more than others.”