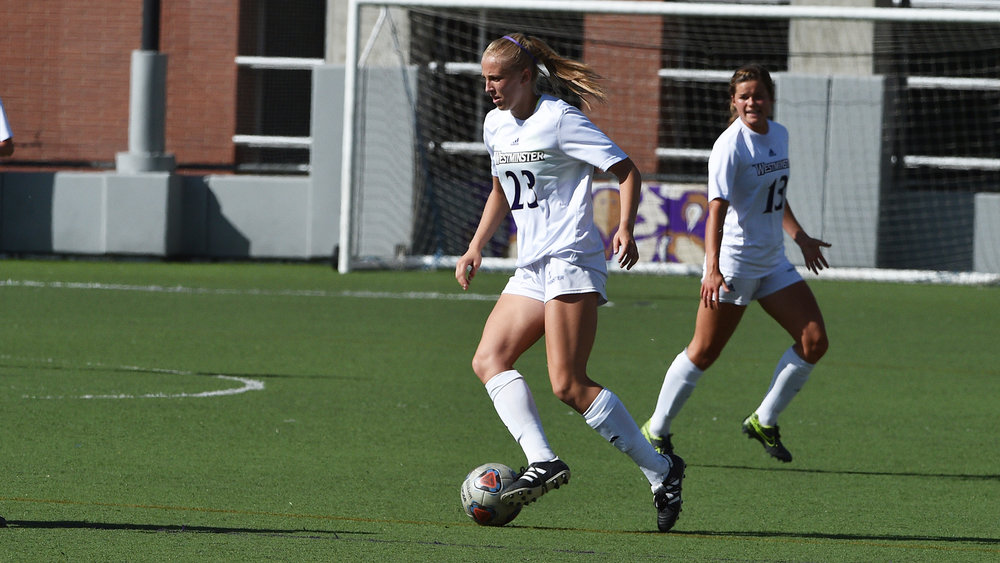 Madison Roemer, a former Westminster soccer player and current women’s assistant coach, possesses the ball during a women’s soccer game at Dumke Field on the Westminster College campus back when she was a player. Roemer said coaching is something she has been working on since her early playing days. Photo courtesy of Bob McLellan, Shooting Star.

Madison Roemer graduated from Westminster College last semester and traded in her cleats and shin guards for a whistle and a clipboard. She’ll be fulfilling what she called a long-awaited personal calling as an assistant coach of the women’s soccer team at her alma mater.

Roemer, 21 and a former captain of Westminster’s soccer team, said coaching is something she has been working on since her early playing days.

At 15 years old, she began getting the prerequisite licenses required for coaching.

Tony LeBlanc, head coach of the women’s soccer team, said he is excited to welcome Roemer into her new coaching role.

“As a two year captain, Roemer helps cultivate a very cohesive and positive culture where all players can comfortably progress,” LeBlanc said. “She will be an absolute credit to the coaching staff and we are excited to bring her on with us.”

The Forum spoke with Roemer about her desire to coach and her calling of helping young collegiate soccer players navigate their college experience.

Q: What drew you to Westminster?

A: I committed when I was 16 years old, and at the time I was playing soccer and basketball pretty competitively and I wanted to go play collegiately. Originally, Westminster was the only institution offering me a spot to play both the sports.

Q: What made you decide to coach soccer at Westminster?

A: Coaching has been a calling of mine for a long time. I starting coaching really young. Probably at age 15 I started getting my coaching licenses. It was something that I was immediately drawn to. The reason I started coaching, the reason I love coaching, is because I want to make a difference and I believe that I can make a difference through coaching. I specifically like to focus on young girls. I think eventually once I’m done coaching in college I’ll coach young club girls’ teams and work to instill that soccer can be a vehicle to go to school, get a higher education and just teach them all the things that soccer has taught me.

Q:  You played with some of these students last year. What’s it like to be one of their coaches now?

A: There is a delicate balance when trying to distinguish your role from a player to a coach. What I am focusing on now is giving the girls space to grow without me. Stepping away and taking a ‘behind-the-scenes’ approach to coaching allows the team to find its niche without me as a coach. Once this occurs, I will be able to evaluate how best to approach my individual role as a coach.

A: I never tell recruits something that I don’t personally believe in. What I tell recruits all the time is, ‘I walked up the garage stairs by the field and looked at the field and was sold.’ That moment is when I knew I wanted to play the next four years of college soccer here.

Q: What do you want the players on the team to learn from you?

A: With hard work, I really believe that anything is possible. As a coach, I want to make girls believe in themselves. I think that when you come to college it can be really intimidating and you kind of find yourself at the bottom of the totem pole. I think it can be a really challenging time, so something I would hope to do as a young coach is instill confidence in those girls and believe in them until they believe in themselves again. I think once that happens people are unstoppable in any facet of their life.